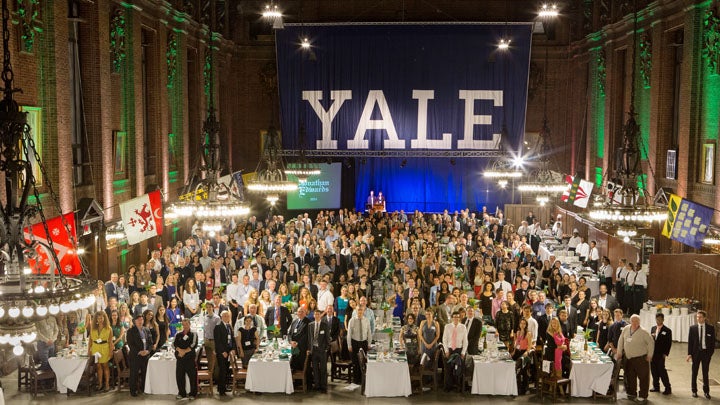 “In the colleges, we could see arriving freshmen not only as minds to be trained, but as infinite and mysterious beings whose hidden potentials, whatever they be, we hoped to nourish,” noted Mark Ryan, dean of Jonathan Edwards College (JE) 1976–1996, a few days after attending the inaugural JE reunion on campus, Sept. 27-28.

“To come back 25 or 30 or more years later, to see how those potentials have been realized, to find how those beings have flowered and to glimpse the marvelous contributions that they are making in their circles and in the world, was a supreme pleasure,” noted Ryan, who added that the reunion “made for what I can honestly say was the most gratifying day of my life.”

A distinctive feature of Yale College, the residential college system, was established in the 1930s and now comprises 12 colleges, with two more soon to be built. Undergraduates have both a “home-away-from-home” in their residential college and access to the breadth and depth of Yale’s overall intellectual resources. This results in an undergraduate learning environment with both the social “benefit of a small liberal arts setting … and the academic benefit of a large research university,” in the words of Jonathan Holloway, the new dean of Yale College and until recently a residential college master himself.

Yale’s residential colleges are “one of the defining characteristics of [students’] four years at Yale,” Holloway has said — an observation affirmed many times over the weekend by JE alumni, such as Marvin Krislov ’82 ’84 J.D., now president of Oberlin College, who noted at a reunion panel that “the residential college is what makes the whole work.” Donald Werner ’55, former head of the Westminster School, agreed that the college are “what makes Yale, Yale” and differentiates it from peer institutions. “Yale’s colleges work,” Werner observed. “It’s a happier place.”

JE’s celebration was the fourth residential college reunion to date organized through the Association of Yale Alumni (AYA), following Ezra Stiles in October 2012, Pierson in February 2013, and Calhoun in February 2014. Designed to bring together students in one residential college from across all years and generations, these new reunions complement the long-standing reunions held every five years by individual classes in Yale College.

“The class reunions echo the heady, happy days of convocation and commencement — thrilling in their way, but removed from the memory of daily life at Yale,” said Jonathan Dach ’08 ’13 J.D., who works as a policy adviser at the U.S. Department of State and was a co-chair of the JE reunion committee. “The homelike residential college reunions perfectly balance them. Returning to the warm hum of the JE courtyard rather than the fever pitch of a class reunion tent was a real joy.”

JE is far from the largest of Yale’s 12 residential colleges in its number of students and graduates, but the “Spiders,” as JE members are affectionately known, organized the biggest such event yet held in Yale College. Nearly 400 graduates and guests came to campus, including many past masters and deans and current fellows. The alumni hailed from the Class of 1948 and the Class of 2013, and nearly every class in between. Over 100 current JE students joined them at a gala dinner at Commons and other events over the weekend.

In addition to many opportunities for informal mingling, the program included a special alumna breakfast for women of JE, a panel discussion and a series of short talks that featured alumni from across six decades, and a panel discussion with current students, as well as tours of the college and of nearby campus landmarks such as the Yale University Art Gallery, Yale Center for British Art, and Beinecke Rare Books & Manuscript Library.

At the panel discussion, Beverly Gage ’94, now professor of history at Yale, noted that “JE was the music college,” and the reunion bore that fact out, with a “JE Musicale” featuring well over a dozen alumni and students. Song could be heard throughout the weekend, including at the gala dinner, where “Bright College Years” — familiar to all Yale College students and alumni — was on the bill along with a “JE Anthem,” newly penned by current JE master Penelope Laurans.

Gratitude was a common theme throughout the weekend. “Yale gave me everything when it came to understanding the world,” said Amy Klobuchar ’82, now a U.S. senator from Minnesota. She noted that JE and Yale inspired her “zest for public service.” Werner said his undergraduate days fired his “love of the word,” while Gage celebrated that Yale and its residential colleges, then and now, make for “a place that values intellectual curiosity for its own sake.”

“I feel every day that being at Yale and JE was the luckiest thing I ever did,” said Pamela Karlan ’80 ’84 J.D./M.A., now professor at the Stanford Law School. She described here time in JE and Yale College as “a pilgrimage in which the things that we learned have stayed with us ever since.” Among those things, Karlan said, are “a fearlessness that you could just sit down and write.” According to her, “I took away from Yale how to read and how to think” and “the desire to give back to students what had been given to me because of the generosity of the faculty we had.”

Miko McGinty ’93 ’98 M.F.A., a New York-based graphic designer and a reunion co-chair, was impressed by the hospitality of current JE students, who were an integral part of the weekend’s success. “They were so open with us,” McGinty said. “welcoming us to visit their dorm rooms, saying ‘hi’ in the basement, initiating conversation at the receptions and JE Women breakfast, being so inclusive. It was really sweet, unselfish, and generous of the students.”

Returning alumni also expressed approval of how the residential colleges remain an essential part of the Yale experience — and how they and the university overall have adapted and changed. “I have seen a school that’s changed with the times,” Klobuchar said. McGinty noted that she and other graduates were struck by “how the college tries to involve and reach every student to give them full support in whatever they may need, especially those from lower income brackets.”

The power of the residential college system, the spirit of JE, and the success of its celebration were demonstrated in an outpouring of thank-you notes from both alumni and students to Laurans and the organizing committee in the days after the reunion. Leslie Dach ‘75, now the senior counselor to the U.S. secretary for health and human services, for example, wrote, “JE was a warm and nurturing community during times that were sometimes stressful and tough. The reunion was a great event. It reminded all of us just how special our experience was. The college system makes Yale what it is and celebrating it makes perfect sense.”

Many participants, including the master, noted that the weekend had many special moments. “I was in tears when I stood and looked out at the audience and saw people from seven JE generations, sitting together, united in their affection for one another and their lives in JE,” Laurans said. “It is a testament to the power of the residential college system and the commitment Yale has made to it.”

For more coverage and pictures of the Jonathan Edwards College Reunion, visit the reunion’s social media such as “JEreunionLive” Tumblrblog from Andrew Lipka ‘78 and the reunion’s Twitter account and tweets using #Jereunion from Ayaska Fernando ’08 and other members of the reunion committee.