U.S. Special Envoy for Climate Change Todd Stern, who has led the United States in global climate talks since 2009, will address domestic and international efforts to mitigate the threat of global climate change during a public speech at Yale on Tuesday, Oct. 14. 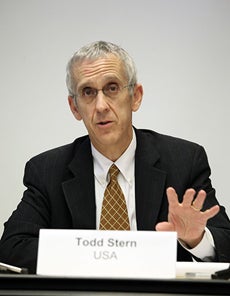 The event, which will be held at 4:30 p.m. in Levinson Auditorium at the Yale Law School, 127 Wall St., is open to the public. It is hosted by the Yale School of Forestry & Environmental Studies (F&ES) and Yale Law School. The speech comes just weeks before the 20th meeting of the annual UN climate conference in Lima, Peru — a meeting that many leaders hope will help set a constructive course toward a successful international climate agreement to be reached at the 2015 climate conference in Paris.

The event will be broadcast via live web stream.

Stern comes to New Haven just weeks after the United Nations Climate Summit, held in New York on Sept. 23, where more than 100 heads of state plus business and civil society leaders came together to call for ambitious action on climate change. At the Summit, President Obama touted U.S. progress on the Climate Action Plan, reaffirmed a U.S. commitment to reach a global climate agreement, and announced several new climate change initiatives. Stern played an active role at the summit, which he called an opportunity for international leaders to build momentum toward a new global climate treaty before the 2015 meeting in Paris.

“Todd Stern plays a central role in developing U.S. climate policy and toward achieving a meaningful global strategy for tackling this critical challenge,” said Yale President Peter Salovey. “Climate change is an issue that will have profound global impacts, and has implications on every field of study covered at Yale. It’s fitting that people from all corners of the university are part of this event.”

“This is a rare opportunity to hear from one of the leading players in global climate policy at a critical stage of international discussions,” said F&ES Dean Peter Crane. “We’re very pleased that we are able to share this important event with the entire Yale community — and with an online audience worldwide.”

“Climate change is the single most important issue for the coming generation,” said Robert C. Post, dean of the Yale Law School. “It is an issue demanding legal response. We are pleased to host Todd Stern, one of the shapers of our national perspective.”

As U.S. Special Envoy for Climate Change, Stern represents the Obama Administration at the ministerial level during all bilateral and multilateral negotiations related to climate issues. He also participates in the development of domestic climate and clean energy policy.

As staff secretary to President Bill Clinton from 1997 to 1999, Stern coordinated the Administration’s climate change initiatives, acting as the senior White House negotiator during the Kyoto climate talks. Prior to joining the Clinton administration, he was a senior fellow at the Center for American Progress, where he worked primarily on environmental and climate-related issues.

During his Oct. 14 visit, Stern will hold a lunchtime discussion at F&ES for students and faculty.