At the end of a recent “Medical Microbiology” class taught by Dr. Sheldon Campbell, students clapped, cheered heartily, and stomped their feet on the floor. A couple of them even shouted “Encore!”

It’s not quite the reaction one would expect from medical students who just spent 45 minutes learning about the symptoms and treatments for various vector-borne diseases, but in their case, something unexpected happened.

To wrap up his day’s lesson, Campbell — associate professor of laboratory medicine and director of the medical microbiology course — picked up his guitar and sang a song that summarized what the students had learned. He invited his students to join in, and they did so, their tentativeness eventually giving way to enthusiasm as they sang — to the tune of “When the Saints Go Marching In” — the lyrics visible via PowerPoint on their iPads and laptops, as well as on a large screen at the front of the classroom.

Some students smiled as they videotaped Campbell belting out his adaptation of the hymn — called “When the Ticks Go Marching In” — which includes the lyrics: “You’re head is a poundin’, and your joints they hurt as well/If the rash has central clearing, it could be Borreleal/Cause when the ticks come marching in …”

Campbell began singing to his students about a decade ago after first picking up the guitar, at the age of 39, while in the company of some folk musicians at a camp in Maine.

“After that, I was an obsessed madman,” recalls Campbell, who enjoyed the instrument so much he began taking lessons.  “About five years after that, I started writing a few songs. One day I was working on my parasitology lectures, and I thought, ‘Oh give me a home where the parasites roam,’ and I put together a lyric to that.” He titled his song about parasitic worms — written to the tune of “Home on the Range” — “Home in the Gut.”

Campbell admits that he was a little bit “intimidated” before performing his adaptation in the Yale classroom for the first time, but then discovered online that a microbiologist at the University of Pennsylvania was singing her own renditions of Broadway show tunes and other songs as a way to impart key points in her lectures.

“I approached that first lecture with great trepidation,” Campbell remembers. “I didn’t know how it would go over. But the students sang along and really enjoyed it, and I think I reinforced some things.”

“Not every lecture has its own song,” Campbell says. “I have one for every block of lectures, so there’s the one for tick-borne infections, one for fungi, one for tuberculosis, one for parasitology, and one that reviews all of the microbiology lessons. When I sit down to write these songs, I think about the learning objectives of my lecture and then try to reinforce those in the lyrics.”

The director of laboratories at the VA Healthcare System as well as director of the Medical Microbiology Fellowship, Campbell says he enjoys performing for his students.

“I like to sing, whether anybody sings along or not,” says the Yale microbiologist. “But I especially like having the students join in. There’s something about singing together that is ancient and wonderful and magical. It builds community.”

More recently, Campbell has been performing at local venues, and was recently featured in a solo performance at Best Video in Hamden, which offers a series of community concerts.

“I do a mix of traditional music and my own music,” he says. “I write about history and contemporary society and topics like that. But, I especially love the old songs that have been selected over the years by a process of natural selection, just like the microbes have been for their purposes.”

Campbell says that his songwriting and performing in the classroom reflects his own philosophy about effective teaching.

“Singing to medical students is a cute gimmick, and I think gimmicks are important to teaching. But it’s not a very extensible model, as not many professors are going to be able to sing to their students and play guitar,” he notes. “I think the important thing is to take something from your life — not just your professional life — and bring it to the classroom. That energizes your teaching; it connects with students in ways that simply talking about infectious diseases or cardiology or oncology cannot. Bringing a piece of your whole life into the classroom is an extraordinarily powerful thing to do in teaching.” 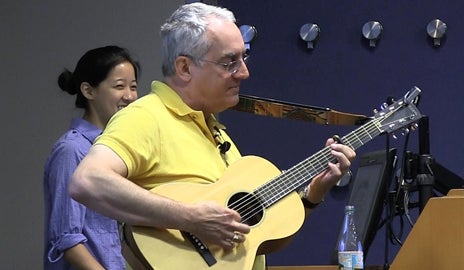 Campbell’s teaching methods, he says, have been influenced by a couple of his colleagues in laboratory medicine: Dr. Frank Bia, a professor emeritus who incorporated his love of history into his classroom teaching, and Dr. Marie Landry, who documented through pictures and notes her children’s viral illnesses to share with her medical students.

“We’re taught as scientists to be calm and objective, but calm and objective is not a performance style,” comments Campbell. “The lecture is as much a performance as it is a conveyance of information. I like to say that giving students a love of science — or a particular area of science — requires three things: an infected host, an efficient means of transmission, and a susceptible host. Most of our students are pretty susceptible; they are here because they want to be. And most of us teachers are infected by a love of what we do. So the only thing we have to think about is the efficient means of transmission. The ‘lecture as performance’ can be an efficient means if we are passionate performers as well as objective scientists, so bringing that passion and performance into the classroom is what I think the ‘take home’ lesson of these songs is.”

Campbell says his own passion for the subject he teaches began while he was an M.D./Ph.D. student at Baylor College of Medicine. He had expected to have a career as a cancer researcher, but a chance venture into a scientific meeting, where he learned about a microscopic parasite called the African trypanosome, hooked him on microbiology.

“Microbes have extraordinary ways of interacting with us,” he says. “An infection isn’t so much an invasion as it is a conversation.”

Noting that bacteria evolve 50,000 times as fast as humans do, Campbell acknowledges that this ongoing evolution opens up all kinds of possibilities for new songs.

“I’m not running out of topics,” he says with a smile. “This spring I wrote a song about multi-drug resistant bacteria infection called ‘You Can’t Kill Me.’” A few years ago, he performed another original song, “We Can’t Have Any Fun,” at a meeting of the American Society for Microbiology. That humorous ditty touts the advantages of spending time in the laboratory rather than out in the world risking a whole range of infectious diseases by coupling with others.

While Campbell says he can’t prove scientifically that his songwriting and performance on behalf of his students is an effective teaching tool, he cites the comments they share with him personally or have written in their course evaluations.

“They do say that they remember the material through the songs, and occasionally I’ll get a third- or fourth-year student who says, ‘Yeah, I remember how to treat Lyme disease because of your song.’ The whole movement in medical education is for more interactive forms of teaching, and this is about as interactive as you can get.”

After enthusiastically singing along to “When the Ticks Go Marching In,” second-year medical student Zola Quao says she enjoyed Campbell’s performance.

“It’s not easy to make medical humor,” she comments, “and the song reinforces what we learned. So much of medical school is reinforcement.”

“Any kind of visuals or rhymes helps make what we learn so much easier to remember,” he remarks. “I’m going to sing along at home.”