At New York University, where she teaches creative writing, Zadie Smith was once asked by a young student: “How did you choose your literary brand?”

Smith, a novelist, essayist, and short story writer, recalled the question during her keynote address at the Sept. 15 prize ceremony celebrating the winners of this year’s Windham Campbell Prizes, during which she lamented any tendency — either cultural or individual — to equate writing with branding, marketing, or consumerism.

In her address — titled “Why Write?” — the award-winning author said the answer to that question cannot be: “to satisfy a pre-existing demand.”

Instead, she told a packed audience in Sprague Memorial Hall, “at the heart of creativity lies a refusal.”

Claiming that the purpose of any creative work is to “make new,” Smith added that creativity is not rooted in the need for approval. She warned young writers to prepare themselves for “discomfort, distaste, [and] confusion,” saying that the creative process always “causes a little bit of friction.”

“A good piece of writing,” she added, “should form its own necessary rules, create its own taste.” 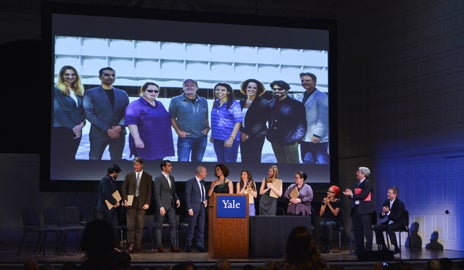 In her talk, Smith contrasted the creativity of art and the creativity of technology, noting that technological innovation is meant to please the consumer. She also compared the purpose of writing to the early days of hip hop and rap music, which she said features some of the best creative writing in America. However, Smith said, what was once an “underground resistance culture” and a “creative refusal” has since become mainstream, conformist, and product-oriented.

Smith argued that “nostalgia is the enemy of creativity,” saying that technical innovators like Steve Jobs create products that “blend seamlessly” into consumer’s lives, while the works of writers challenge readers by showing things both “as they are” as well as “how [they] might be otherwise.”

More than any other art form, the act of writing is the most “free of practical constraints,” said Smith, adding that writers “only need language.” But with this tool, they have the power to transform and surprise, as well as to challenge both themselves and their readers.

While all artists want to be heard and listened to, they also have a responsibility to interrogate, to “creatively refuse,” said the writer.

Smith gave her speech before the eight winners of the Donald Windham-Sandy M. Campbell Literature Prizes were presented their awards by President Peter Salovey. In addition to a citation and diploma, each of the eight — playwrights Kia Corthron, Sam Holcroft, and Noëlle Janaczewska; fiction writers Nadeem Aslam, Jim Crace, and Aminatta Forna; and nonfiction authors Pankaj Mishra and John Vaillant — received an unrestricted grant of $150,000, allowing them the freedom and time to write with the lack of constraint that, as Smith noted, is so essential to their creative process. The prizewinners will take part in a series of conversations, readings, and other events on campus through Sept. 18. See the full schedule.