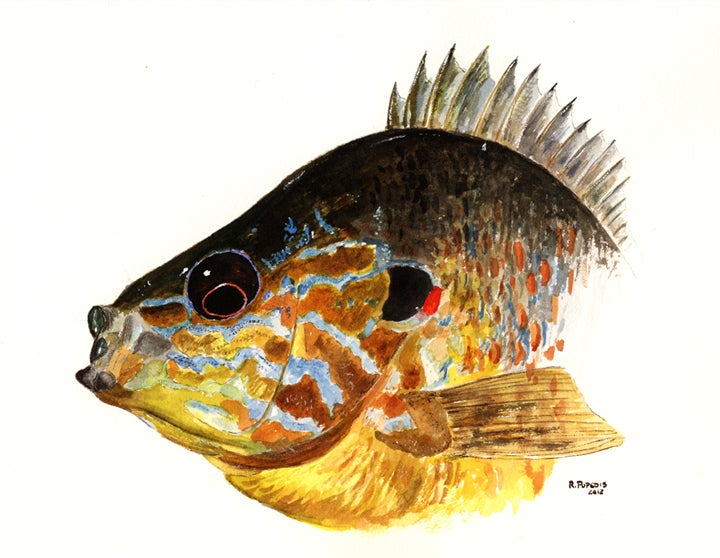 Original photographs, sculptures, paintings, and drawings of the natural world created by staff members at the Yale Peabody Museum of Natural History are featured in an exhibition now on view in the first-floor corridor of Yale’s Class of 1954 Environmental Science Center, 21 Sachem St.

“Exhibitors work in a wide range of areas at the Peabody, from collections and exhibit preparation to education and administration, but all are guided in their jobs by the museum’s mission ‘to advance our understanding of earth history and steward its rich collections,’” write the exhibit organizers. “The influence of the workplace environment is evident in the themes represented, all of which display a fascination with the natural world.”

Ray Pupedis, senior collections manager for entomology, found inspiration for his watercolors in his love of flyfishing. His “Streambed #1” captures the glistening effect of a shallow, crystal-clear stream over rocks as a small fish swims through. “The Abutments — Housatonic River” shows a fisherman casting, and “Pumpkinseed,” the exhibit’s featured image, depicts a vibrantly colored member of the sunfish family. The patterned skin is rendered to mimic sunlight reflecting on the shallow water of river beds, the species’ means of camouflage.

Lynn Jones, museum assistant, finds beauty in fauna and flora alike in her photographs of a butterfly, gallinule (marsh bird), and dandelion. For the latter, “Dandelion, Taraxacum officinale,” one of the largest works displayed, she used a macro lens to capture the weed’s seed head, shown in an asymmetrical state with many of its seeds dispersed.

Rosemary Volpe, publications manager, is an artist whose paintings and drawings have appeared in major publications. Her “Plains Zebra, Equus quagga burchelli,” showing two of the animals cavorting, showcases the beauty of the creatures. This watercolor appeared in Field & Stream in 1997. Her watercolor “Mountain Delphinium, Delphinium nelsonii” was on the June 1997 cover of Scientific American. In contrast, “Barn Owl Study, Tyto alba” is a graphite drawing.

“Untitled” by Armand Morgan, senior instructor, is a digital display of sketches in pencil, watercolor, acrylic, and ballpoint pen on paper. Morgan writes, “The sketchbook is a simple way for me to visually investigate what’s around us, to appreciate what I find interesting about the space and land I see daily.”

Richard Kissel, director of public programs, brings a whimsical note to the exhibit with his digital media entries, “Type Specimen” and “Food Chain.” In the latter, Kissel, a paleontologist, uses cartoon images of dinosaurs to demonstrate a likely predator cycle.

Jorge de Leon, ornithology library assistant, has followed his love of birding around the globe. His hotographs of “Atlantic Puffin, Fratercula arctica” (New Brunswick), “Ibisbill, Ibidorhyncha struthersii” (Nepal), and “Green-Tailed Sunbird, Aethopyga nipalensis” (India) are accompanied by information about the birds’ habitat and habits. The Atlantic Puffin, for example, is a social bird only when it is nesting, but spends most of its life in the open ocean. De Leon took the photograph in June during nesting season when the colors of the bill are especially brilliant.

“Uprooted,” a photograph by Annette Van Aken, project registrar, shows a rooted path in Acadia National Park. Van Aken writes, “On a late afternoon hike I turned a corner … and came upon this spectacular scene.” It was the last frame in her last roll of film. When she tried to find the spot five years later, the path had been covered with planks to protect the delicate roots. In contrast are her two “Dahlia” entries, both depicting a detail of the flower, one in black-and-white, the other in color.

Sally Pallatto, graphic designer, also found compelling scenes to photograph on hikes. Her “Sleeping Giant Meanders” captures a similar scene as “Uprooted” that she spotted locally. “Lost on Shore, Lake Sebago,” shot on a trip to Maine, finds beauty in the scene of an abandoned boat buried among leaves and ferns.

Susan Hochgraf, museum technician, has two works in the exhibit: “Green Jay, Cyanocoraxyncas luxuosus” and “Jocotoco Antpitta, Grallaria ridgelyi,” both in acrylic. She writes, “I have often wanted to do a series of paintings or photographs entitled ‘Here’s looking at you’ — but of course these birds aren’t really looking at us at all.” She explains that only owls have binocular vision. Other birds see mostly from the side, an attribute helpful in detecting predators. Both birds are depicted in frontal and profile views.

Elizabeth Steele, scheduler in public education, shows her affinity for the abstract in her colorful landscapes entries: “Field,” in gouache, and “Spring Marsh,” in mixed media. Her abstract monotype “Bones” is more like a still life than an anatomical drawing, thanks to the soft tones and partially obscured form.

The different moods of the Milford, Connecticut shore are captured by Maische Dickman, museum technician, in “Red-breasted Merganser,” “Sunrise, Woodmont Beach,” and “Hurricane Sandy, the Morning After.”

As an exhibit designer, Laura Friedman is accustomed to putting designs on paper at work. In her two works in the exhibit — “Chubb Mount, AMNH” and “Dissection Drawing” — she uses charcoal pencil and white chalk to demonstrate her command of animal and human anatomy respectively.

The artistry of Michael Anderson, exhibit preparator, is on display in “Winged Figure,” a plaster and resin cast influenced by Assyrian bas-reliefs and Stony Creek granite. Anderson sculpted the Peabody’s bronze “Torosaurus” statue, the base of which is Stony Creek granite. The show also includes his “Comparison of Skulls of Insectivorous Birds,” hand-carved scientific models showing the enormous palate and orbit of the Common Nighthawk in relation to two other insectivorous bird skulls, the Barn Swallow and Great Crested Flycatcher.