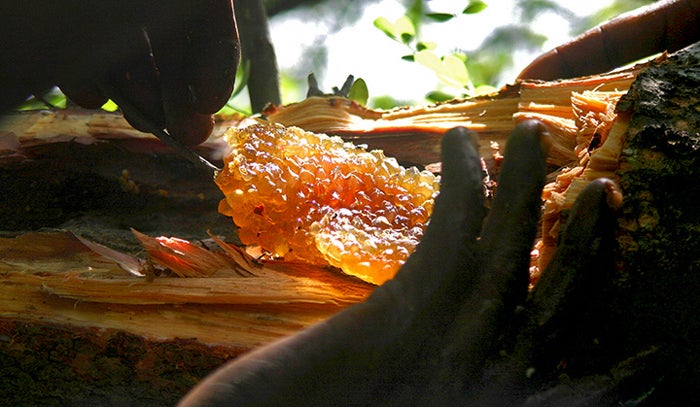 Hadza hunter-gatherers of northern Tanzania have developed a deep and mutually beneficial relationship with the Greater Honeyguide bird, which, as its name indicates, leads people to sources of wild honey. Yale anthropologist Brian Wood has studied in great detail the intricate, and often surprising, interactions between people and birds in a new study published in the journal Evolution and Human Behavior.

But what do the birds get out of this relationship? Turns out, not too much. Many writers have suggested that people actively reward honeyguides, but Wood found that the opposite is true.

“The Hadza hide, bury, or burn honeycomb that the birds might have eaten,” Wood said. “They told me that they do this to keep the birds hungry so that they will keep leading them to other bee colonies.”

This does not mean there is no payoff for the Honeyguide. Humans are much more adept than birds at opening bee nests and getting at the honeycomb. Although the Hadza hide and destroy honeycomb that the bird might have eaten, the birds usually find some scraps and leftovers to scavenge.

“The relationship between the Hadza and Honeyguide teaches us that cooperation can persist even when one party manipulates the other.” Wood said. “This relationship has probably evolved over thousands, if not millions, of years.”