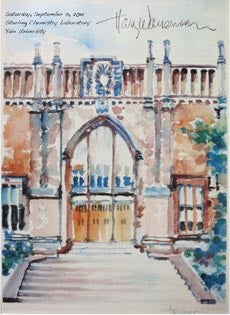 There will be a memorial symposium on Saturday, Sept. 13 to honor the life and work of Harry H. Wasserman, the Eugene Higgins Professor Emeritus of Chemistry, who died on Dec. 29, 2013 at the age of 93.

The symposium, hosted by the Department of Chemistry with support from the Dreyfus Foundation, will take place 1–6 p.m. in the Sterling Chemistry Laboratory, 225 Prospect St.

Wasserman served in many capacities at Yale for almost 60 years, from 1948 when he joined the faculty until 17 years after his retirement in 1991. He was a prize-winning scientist, whose research group developed innovative methods for synthesizing antibiotics and other natural products. He was also a respected teacher, who taught organic chemistry for more than four decades. In its obituary for Wasserman, The New York Times noted that he gained admiration “for making an often-dreaded course clear and enjoyable.” In honor of the professor’s skill in the classroom, Yale established the Wasserman Prize for Excellence in the Teaching of Chemistry. Wasserman also served as chair of Yale’s Department of Chemistry 1962–1965 and director of the Division of Physical Sciences 1972–1975.

In addition to his scientific achievements, Wasserman was an accomplished artist and musician. He became well known for his watercolor drawings of cityscapes and natural environments, and his paintings of campus architecture were featured for 15 years as the cover illustration for Yale’s summer course catalogue. A self-taught clarinetist, he played with a number of jazz combos, including a quartet of chemists performing as “The Gloom Exterminators.”

The symposium in Wasserman’s honor will feature several scientific presentations — including one by Wasserman’s son Steven, a biologist at the University of California-San Diego — as well as short presentations about Wasserman as “chemist, mentor, teacher, raconteur, humorist, editor, artist, musician, adviser, [and] family man.” Admission to the symposium is free, but participants must register in advance.

Click here for the symposium schedule and registration information.