A ‘cool’ step on the road to building a solar house 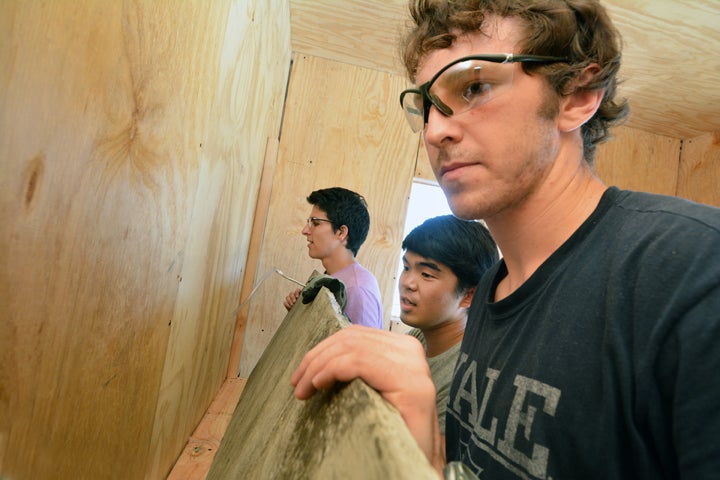 Don’t be fooled by its simplicity — it’s more than a plain wooden box.

“It’s a rough-draft room,” says Robert Loweth ’16, of an eight-foot-cubed wooden structure, which more closely resembles a kid’s clubhouse than a testing chamber.

Loweth — a mechanical engineering major — is one of eight undergraduates heading the first Yale team ever selected to participate in the U.S. Department of Energy’s biennial Solar Decathlon. He and teammate Juan Pablo Ponce de Leon ’16 (joined for a day by Thaddeus Lee ’17) have been working at Yale’s West Campus testing cooling panels.

Starting with a miniature one-foot-by-one-foot box, the team recently finished the full-scale insulated plywood structure, which is currently located in the loading bay of a warehouse. It is the latest step on the road to building a solar-powered house that is affordable and energy-efficient, complete with appliances, cabinetry, and entertainment systems.

‘Not about being pretty’

“This summer, it’s not about being pretty,” said Ponce de Leon. “Right now we’re testing ceiling and wall cooling panels to see which are most effective and where it would make sense to put them in a house.”

According to the team, the initial plan was to compare the cooling panels to conventional air conditioning (AC) systems, but time and financial constraints compelled them to focus on panels. As opposed to traditional AC, which uses electricity as a power source, the aluminum cooling panels collect thermal heat from the sun and transmit it to a solar-powered chiller via a liquid solution that powers the system.

“Our hypothesis is that cooling panels will fare better than regular AC for a variety of reasons, like the fact that surfaces as well as the air are cooled and we avoid uncomfortable drafts,” said Ponce de Leon. “However, we want to be sure so when we implement this system in the house we can be confident of its performance.”

The next step will be to acquire a global thermometer to measure air temperature, humidity, air velocity, and the temperature of surfaces — all factors that affect whether or not we feel hot or cold. The team will also invite people into the eight-by-eight structure to ask if they find the ambient temperature to be comfortable, a test the students note is more qualitative than quantitative, but useful.

Loweth, who has built set pieces for the Yale Dramat Association, is the project engineer for the solar house. He said the team will continue to use the versatile space to test lighting and other HVAC ideas.

Ponce de Leon and Loweth, who have been working on CEID summer fellowships, completed their work in mid-August, but other team members, including Kate McMillan ’16, will be coming in to continue work on the project.

Their solar-powered house will be approximately 1,000 square feet and must be shipped to Orange County Great Park in Irvine, California, where the judging will take place in 2015. The competition includes 20 university-led teams involving 800 students. The winning project will be the one that best blends affordability, consumer appeal, and design excellence with optimal energy production and maximum efficiency.

The students, who are responsible for securing financing for the project, have received support from the Hines Fund at the Yale School of Architecture; the Center for Engineering Innovation and Design; the Yale Climate and Energy Institute; the Center for Business and the Environment at Yale; IBM; and Turner Construction, New Haven. In-kind support has been provided by West Campus and Reclamation Lumber, New Haven. The team is applying for grants and is also hoping to secure additional in-kind support in the form of installation and contracting services, power tools, and heating and cooling systems.

Other creative design projects that took place nearby at West Campus this summer included some work for the for the Jim Vlock First Year Building project. In addition, Peter Hirsch, a master’s degree student in the School of Forestry & Environmental Studies — and a former solar decathlon contestant — is building a WikiHouse, a small house made of prefabricated, modular parts that are “printed” from lumber using a CNC (Computer Numerical Control) machine.