How do you feed a hungry quasar? With a ‘super boost,’ scientists say 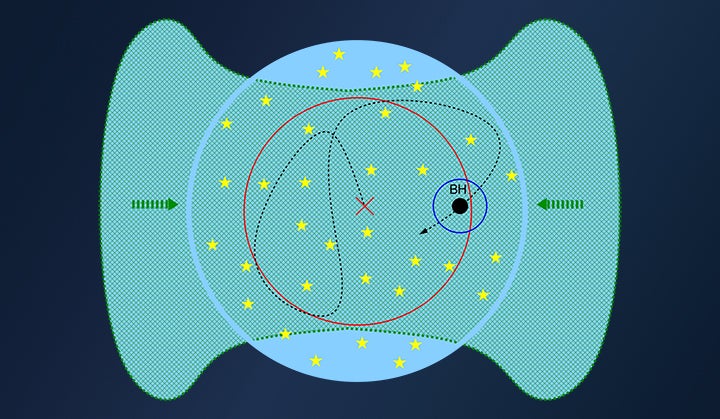 The universe’s oldest, brightest beacons may have gorged themselves in the dense, cold, gas flows of the early cosmos — creating a kind of energy drink for infant black holes in the young universe — according to new research by scientists at Yale University and the Weizmann Institute in Israel.

For years, scientists have tried to explain the intense luminosity of quasars in the early universe. Quasars’ light is powered by swirling gas that is pulled in from the gravity of black holes. Located in the deepest precincts of space, the energy emitted by this infalling gas reveals the presence of black holes.

Yet the earliest quasars — those dating from when the universe was barely a billion years old (today the universe is 13.8 billion years old) — have proved baffling. Their brightness suggests they harbor black holes with a million times more mass than the Sun; scientists have been at a loss to understand how these behemoths assembled so rapidly, by cosmic standards.

“The first black holes are believed to be remnants left behind after the first stars burned out completely,” said Priyamvada Natarajan, a Yale University professor of astronomy and physics. “The puzzle has been how these ‘seed’ black holes grew into the monsters that we now see within the time available, a few billion years at best.”

Natarajan and fellow researcher Tal Alexander of the Weizmann Institute have come up with a possible answer. Their analysis shows that early quasars took in a “super boost,” feasting from large reservoirs of gas that were part of early star clusters.

The research appears in the journal Science.

Natarajan and Alexander found that the robust, volatile nature of the early universe made such conditions quite likely. New black holes, they explain, were swept up into a celestial smorgasbord of gas in the star clusters that harbor them. This motion, in turn, circumvented normal restrictions that would prevent black holes from gorging on gas at a much-accelerated rate.

“There is a new way to super boost the growth of early black holes and make them very massive within a very short time in the early universe,” Natarajan said.

The scientists discovered the mechanism for this feeding frenzy by combining their areas of expertise. Alexander works in stellar dynamics, and Natarajan has long studied the growth history of black holes.

“We realized that the setting where this kind of unbridled growth of initial seeds can occur was found to be commonplace in numerical simulations of the early universe,” Natarajan said.

The research was supported in part by the National Science Foundation, with a grant from the Theoretical and Computational Astrophysics Network.