Marcel Mutsindashyaka is a Rwandan genocide survivor: he lost every single member of his family save his younger sister. Two decades later, at age 25, he’s founder and CEO of UMUSEKE LTD., the second most popular news website in Rwanda. “I survived the most violent genocide. I survived in a grave of 20,000 people. But I started primary school three months after,” said Marcel.

Mutsindashyaka is one of the 25 young African leaders Yale hosted this summer as part of President Barack Obama’s Mandela Washington Fellowship. Yale was one of 20 American universities chosen to host the inaugural year of the program, and the 500 Washington Fellows spread across the United States were chosen from a pool of more than 50,000 applicants.

Highly accomplished leaders between the ages of 25 and 35 —and from 16 African countries — the cohort at Yale included CEOs, entrepreneurs, and innovators in various fields, from technology to media to healthcare. The fellows are passionate about the empowerment of youth, women, education, and environmental sustainability and before coming to Yale, were already making positive, large-scale changes in their home countries and communities.

The Yale program, hosted by Yale World Fellows, featured a business and entrepreneurship curriculum. At Yale School of Management, fellows met with a range of speakers and professionals from IBM, McKinsey, Aberkyn, Barclays, and other businesses; engaged in an intensive session on personal branding; discussed social entrepreneurship with Yale School of Management Professor and Honest Tea founder Barry Nalebuff; dove into impact investing with Yale World Fellow Tokunboh Ishmael; and explored critical elements of leading self and others.

“I used to measure outcomes in terms of profit,” said Adebayo Alonge, a Nigerian pharmacist working to expand access to generic drugs in his country. “But I’ve learned that outcomes are more meaningful if they have a social impact.”

Fellows met with editors and reporters from The Wall Street Journal and Arise News Network, visited the United Nations headquarters, met with Yale alumnus Stephen Hendel of Hess Corporation, and danced with the star of the Broadway play Fela! at a party with Okayafrica in New York. In New Haven, the group spent time at local startup SeeClickFix — inspiring Charlie Wandji, a Cameroonian tech entrepreneur, to take action. “I immediately wrote to the Embassy of Cameroon and proposed [we implement SeeClickFix in Cameroon]. Right now, we’re working on how to do that.”

Fellows also practiced design thinking at Yale’s Center for Engineering Innovation and Design, witnessed 3D printing at MakeHaven, and explored co-working and met with local entrepreneurs at The Grove. “The innovation hubs in New Haven use whatever they have to produce whatever they can, and that has been really inspiring,” said Zandile Lambu, a telecoms manager from Zimbabwe. Fellows served hot meals at the New Haven’s Downtown Evening Soup Kitchen and planted trees on a drab strip of State Street. At a block party at the Stetson Branch of the New Haven Free Public Library in the Dixwell neighborhood, the group met and celebrated with more than 200 New Haven community members at a barbecue with music and sidewalk chalk drawing, among other activities. 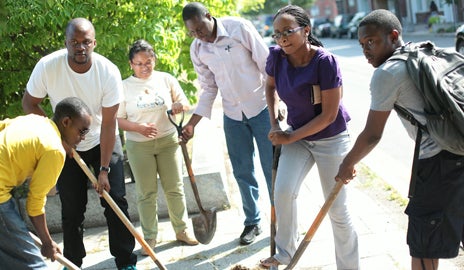 Rachel Nyaradzo Adams, associate director for Africa in Yale’s Office of International Affairs, notes that hosting these 25 rising leaders comes as the university is expanding its engagement and outreach with the continent, seen also in a new program this August — the Yale Young African Scholars Program — for talented high school students being held in Accra, Ghana, and Addis Ababa, Ethiopia. This fall, Yale College will welcome the largest cohort of freshmen from Africa in its history.

“We at Yale are keen to grow our work in support of future leaders at all ages,” said Adams, who led leadership development programs for McKinsey in South Africa before coming to Yale and who was part of the Yale team, including Uma Ramiah, Valerie Belanger, Ruth Assefa, and Ifeanyi Awachie, for the Mandela Washington Fellows program under the direction of Michael Cappello of the World Fellows program.

After their six-week fellowship at Yale, the fellows headed to Washington, D.C., to attend a summit with President Barack Obama, First Lady Michelle Obama, and Secretary of State John Kerry ‘66. In D.C. this week, Monicah Tenai, a deaf sign language tutor and teacher from Kenya, delivered a presentation developed by the group urging Africa’s heads of state to invest in inclusive innovation hubs for the continent’s youth. “[At Yale] I learned I had to be confident with myself first,” Monicah said. “I didn’t think I could stand up here and present, and here I am.”

Following their summit, some fellows will continue their experience in the U.S. through internships. Ethel Cofie, an IT expert from Ghana, will intern with someone she met at Yale: Jon Gosier, founder of Appfrica — a social enterprise helping companies manage projects in Africa. Others will return to their home countries to share new perspectives, knowledge, and networks with their communities.

“Leadership is what Africa needs at all levels,” said Moses Nkomo, a Zimbabwean intellectual property attorney. “My commitment leaving this place is to mentor young people in leading from their strengths.” While at Yale, Mutsindashyaka and Nketso Tlhasana, a broadcast journalist from Botswana, drew up a plan to develop and launch a new major news website in Tlhasana’s country upon their return to the continent.

Leaving Yale, the fellows expressed their gratitude for the challenges and rewards of the program. “I’ve learned how to connect with my soul. I’ve learned how to be vulnerable and authentic,” said Tlhasana. “I’ve made several relationships that will be lasting. And finally, I’m ready to be my own boss.” Across the board, fellows communicated how inspired they were by their colleagues. “The 24 fellows in this room are amazing. Very intelligent, very smart, very frustrating,” said Lambu in her final presentation. “I’m not intimidated by you anymore, but I was. This room has some of the sharpest minds in Africa.” Lambu’s contribution to entrepreneurial development through mobile money in Zimbabwe was highlighted by John Kerry in his opening speech to the fellows in Washington, DC.

The fellows also voiced how changed they were by their interactions with Yale and New Haven.

“Before, I thought I was flying, but I wasn’t even running. I was walking,” said Kwasi Gyeabour, a solar energy expert from Ghana. “Now, I have the wings, and I’m ready to fly. See you guys in the air.”