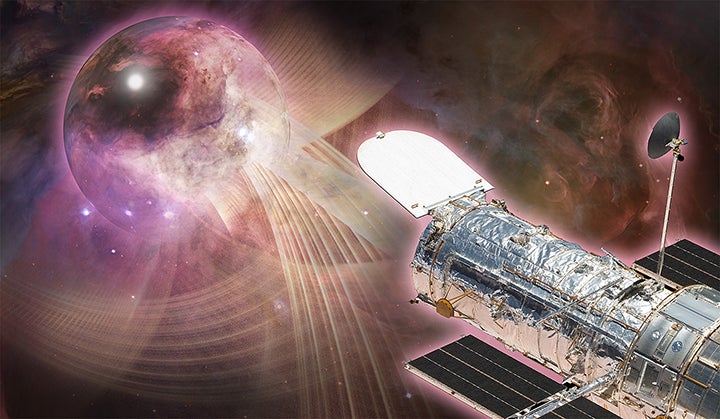 A Yale University astronomer has helped confirm the existence of a spyglass in deep space that acts as a zoom lens into a distant galaxy in the midst of birthing new stars.

It is the farthest known example of a “gravitational lensing galaxy,” a phenomenon caused when a galaxy’s gravity warps and magnifies the light from objects located behind it. In this case, the discovery also offers hints at early galaxy formation.

“We expect this to be quite rare. It’s been difficult to find lensing galaxies this far away,” said Ivelina Momcheva, the Yale postdoctoral researcher who sifted through a maze of data to confirm the galaxy’s lensing status. In 2009, Momcheva was part of the research team that discovered the lensing galaxy’s surrounding cluster, IRC 0218.

The team, led by Kim-Vy Tran of Texas A&M University, was intrigued by initial spectrographic data for one of the galaxies in the center of IRC 0218. For one thing, there was evidence of hot hydrogen gas — a strong indicator of new star formation — in a spot where no young stars were expected. In addition, these young stars appeared to be much farther away than the massive, elliptical galaxy they surrounded.

Was this the result of some galactic collision? No, the scientists concluded: It was a cosmic magnifying glass.

Using data from the Hubble Space Telescope, Momcheva determined that behind the larger, elliptical galaxy, there was a tiny, more distant galaxy experiencing the birth of stars. It was visible only because of the lensing phenomenon.

“It was very much like solving a riddle,” Momcheva said. “Combining the different observations was like collecting clues across the spectrum of light.” Momcheva analyzed observations from the 3D-HST survey — a near-infrared, Hubble spectroscopic survey — as well as images from Hubble’s Cosmic Assembly Near-infrared Deep Extragalactic Legacy Survey; and archival Hubble observations of the cluster.

With the new information, researchers were able to make detailed measurements and observations about both galaxies. For example, the lensing galaxy in front is massive for its epoch in the early universe, some 9.6 billion years ago. The team was able to determine that it weighed 180 billion times more than our sun, about a third of the weight of the Milky Way. The team also determined the lensing galaxy has very little dark matter, compared with nearby galaxies.

Finding this galaxy, Momcheva explained, provides a first step in understanding how early galaxies accumulated dark matter, the as-yet-unseen substance that makes up much of the universe.

The galaxy behind it, meanwhile, is a tiny spiral galaxy. We are seeing its light from 10.7 billion years ago.

“Gravitational lensing allows us to look at these tiny, distant galaxies and explore them in extraordinary detail,” Momcheva said.

A scientific paper on the research appears in The Astrophysical Journal Letters. The first author is Kenneth Wong of Academia Sinica Institute of Astronomy & Astrophysics in Taipei, Taiwan.