The Yale School of Architecture’s (YSoA) latest building project — located at 179 Scranton Street in the West River neighborhood of New Haven — focuses on affordable housing as part of a long-term collaboration with the New Haven Livable City Initiative.

Unique among architecture schools, the Jim Vlock First Year Building Project gives Yale students an opportunity to design and build a house in an economically challenged neighborhood in New Haven. Throughout the process, students work with Yale faculty and advisors, community organizations, and the clients who will eventually live in the house.

This year, students were tasked with designing an 800 square foot home for one of the city’s more than 100 vacant “sliver lots.” The house is divided into one 500-square-foot unit for the homeowner and one 300-square-foot-unit for a tenant. Students broke into seven teams to work on simultaneous proposals throughout their first semester. A panel comprised of faculty, guest jurors, students, and the project’s clients and partners selected the final design.

“We were all very honored and surprised that our house design was chosen, as it was one of the more unconventional proposals — especially since the house was placed at the back of the site,” said Charles Kane M.Arch ‘16, one of the students from the team whose design was selected.

He added that the team approached the project by reconsidering the idea of compact living.

“Despite a small footprint, the building maintains presence in the neighborhood because of its three-story height and atypical design. The large windows and high ceilings help create a sense of openness inside the house. The building was strategically placed toward the back of the lot to maximize the yard and create living space outside of the building. We hope the house will serve the future owner well and help people consider the possibility of micro-housing.” 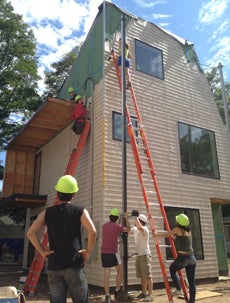 The entire class of 54 students worked on building the house on Scranton Street through the end of June. A crew of 14 interns and five teaching assistants has continued to work full-time over the summer. According to Katherine Stege, M.Arch ‘16, one of the student project managers, they expect to be finished sometime in mid-August.

“Learning to work together as a class has been an enlightening and positive experience that will surely impact our future careers,” she said.

This year, the YSoA is partnering with Neighbor Works New Horizons of New Haven, an organization committed to affordable housing, and HTP Ventures LLC, a private equity firm interested in mass-producing micro dwelling units. One of the key criteria for this year’s design is that it must be easy to replicate across New Haven, helping the city address a long-standing challenge of building in small urban spaces that until now have been deemed unsuitable for residential construction.

“On the day of our final review, Shaun Donovan, U.S. Secretary of Housing and Urban Development, gave a speech in Washington, D.C., where he called the lack of affordable housing ‘the worst rental affordability crisis this country has ever known,’” said John Kleinschmidt, M.Arch ‘16, the other student project manager. “Our house is a tiny step forward. There’s the potential for renting the very small unit to someone who can’t qualify for affordable housing programs, and it’s built on a lot that would otherwise not be developed.”

The program, which began in 1967, is mandatory for all first-year graduate students in YSoA, many who arrive at Yale with a special interest in socially responsible design.

“We’re still bouncing back from a financial crisis that exposed the American dream of home ownership as a fragile construct,” said Kleinschmidt. “It’s easy to say that adding another house to New Haven’s housing stock is actually irresponsible. But, when you look closer at the house we designed and built, it stands out from the crowd.”

The new home will be dedicated in a special reception at 179 Scranton Street on Thursday, Oct. 2 from 5-7 p.m. The event is free and open to the public, which is also invited to follow the team’s progress on Facebook and Tumblr. To see past building projects since 2009, visit the School of Architecture website.