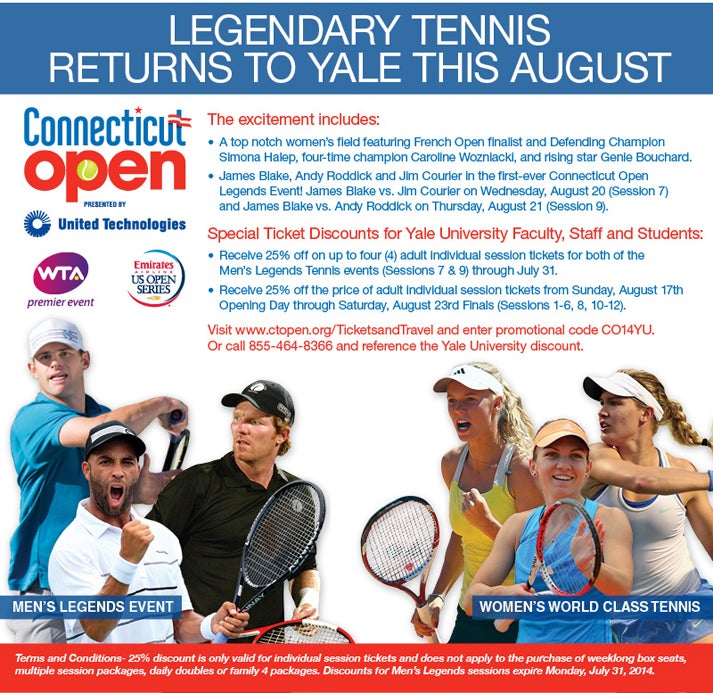 Members of the Yale community can experience the excitement of watching the world’s top women tennis players compete while also enjoying a good bargain, thanks to an exclusive offer of discounted tickets for faculty, staff, and students by the Connecticut Open, presented by United Technologies.

This year also marks a return of some of the world’s most noted male players — James Blake, Andy Roddick and Jim Courier — for the first-ever Connecticut Open Legends Event, which will take place on Wednesday and Thursday, Aug. 20 and 21. Through July 31, Yale affiliates will receive 25% off on four adult individual session tickets for both of the men’s events.

The annual Women’s Tennis Association event, held at the Connecticut Tennis Center at Yale University, took on a new name this year when United Technologies Corporation became the presenting sponsor of the tournament. Other sponsors include Yale, Yale New Haven Health, First Niagara, Aetna, and American Express, among others. The tournament, part of the Emirates Airline U.S. Open Series, is now owned by the State of Connecticut.

Qualifying rounds for the tournament begin on Friday, Aug. 15.  The contest features 32 women in singles matches and 16 players in doubles.