It’s easy to take for granted the bus that delivers us to our daily destinations, the bridge that allows us to cross a river, the public spaces in which we gather for peace or play, or the water that runs through our taps — but that’s exactly what Yale teacher Elihu Rubin hopes his students will NOT do.
By Susan Gonzalez
Share this with Facebook Share this with Twitter Share this with LinkedIn Share this with Email Print this

It’s easy to take for granted the bus that delivers us to our daily destinations, the bridge that allows us to cross a river, the public spaces in which we gather for peace or play, or the water that runs through our taps — but that’s exactly what Yale teacher Elihu Rubin hopes his students will NOT do.

And, after creating “A People’s Guide to Infrastructure in New Haven” — an online exploration of the past, present, and possible future of the city’s infrastructure networks — it is unlikely Rubin’s students will ever again be nonchalant about those elements of life.

Rubin, assistant professor of architecture, urbanism, and American studies, teaches a seminar titled “Infrastructure: Politics and Design,” which is cross-listed as a course in architecture and political science. This spring, the 14 undergraduates in the seminar examined various types of urban infrastructure, focusing much of their study on New Haven.

As part of a course project to create the “People’s Guide,” the students were split into small teams by subject area — Transportation, Water and Waste, Energy, Parks and Public Space, and Telecommunications — and asked to research and write about these topics. The guide they produced, says Rubin, is “a history of various infrastructural developments since New Haven’s founding until the present day and analyzes contemporary issues and debates in city planning and development.”

Rubin, who has taught the seminar on three occasions, says this was the first time he made New Haven the primary focus of the course, which also looks at other urban centers in the nation. Assigning his students to collaborate on creating the guide was a fun way to give his students a firsthand look at infrastructure networks in the city and to learn about the relationships between them and people’s daily lives, he says.

“People tend to think about infrastructure as neutral or disinterested. In fact, it’s not,” says Rubin. “In the class and through the project, my students came to understand how infrastructure is produced within specific political and cultural settings. I wanted them to see that infrastructure does not impact everyone evenly or equitably.  In this way, a study of infrastructure raises issues of social justice. Students were excited by the idea of demystifying infrastructure—which can be big and beautiful and iconic—and to show how it is not static: The way things are is not necessarily the way things have to be.”

Rubin, who graduated from Yale College in 1999, credits some of his undergraduate professors for inspiring his own interest in urban planning, development, and city landscapes. 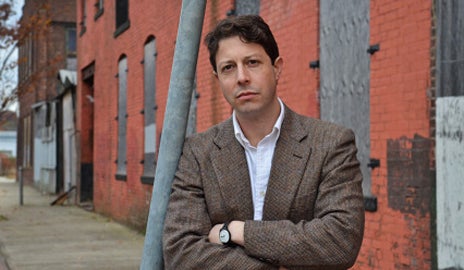 “Vincent Scully was the one who got me to start looking critically at buildings. Who made it?  For what purpose? How have its uses and social meanings changed over time?” says Rubin, adding that he was also influenced by an undergraduate course on civic pageantry taught by his School of Architecture colleague Alan Plattus and by historian Jay Gitlin’s course on suburbanization.

During the semester, Rubin’s students visited the sites of various city systems, such as parks or power plants, to learn about the history behind their development and design. They also took advantage of archival material at Yale, the New Haven Museum, and other sources to create the illustrated guide, which includes some historic images of the city.

Among the topics covered in the “People’s Guide” are New Haven’s rail and bus systems, roads, the sewage system and garbage disposal practices, the evolving bicycle infrastructure, and current ideas or proposals for future infrastructure changes in the city, such as introducing streetcars in some parts of the city.

Rising senior Julian Sagastume, who is majoring in political science, says he took Rubin’s seminar because of his interest in urban planning and urban governance.

“I know that infrastructure is vital to the functioning of cities, but thought it would be enriching to understand things like a city transportation system or power lines from a design and historical standpoint in addition to a political one,” he says.

Sagastume and rising senior Diana Li served as co-editors of the guide. In addition to contributing to the “Energy” chapter, Sagastume wrote the afterword, while Li contributed to the “Transportation” chapter and wrote the guide’s introduction.

“One of the things that Diana and I stressed in our sections is how infrastructure is something that really gets taken for granted,” Sagastume says. “Learning about the political debates and forces behind the way things work in the city was interesting. It’s hard now for me to look at a bus or a power line in the same way because I now know some of those things are a matter of controversy.”

In the chapter on “Energy,” for example, Sagastume — along with co-authors Sylvia McNamara and Ronald Taitz — note the debate sparked by the United Illuminating Company’s plan to remove trees growing within eight feet of power lines in the city. They cite the claim by the Garden Club of New Haven that this would result in the loss of up to half of the city’s trees.

One concept that was reinforced in Rubin’s seminar is that cities “re-make themselves periodically,” says Sagustume, who has also witnessed this firsthand while working during the school year in New Haven’s City Plan Department and this summer as a Yale President’s Public Service Fellow in the city’s Department of Transportation, Traffic and Parking.

“In New Haven now and in a lot of cities, we’re seeing a new paradigm, another round of remaking,” Sagustume comments. “There’s a debate going on now about turning streets from one-way to two-way, or modernizing energy plants, and about bike infrastructure. What I learned from Professor Rubin’s seminar is that in every situation, it is important to ask: Who benefits? What would this look like in 20 years?”

Li, who formerly covered the city beat for the Yale Daily News and now writes about Yale’s hometown for the New Haven Independent, says she rarely takes courses that are not related to her ethics, politics, and economics major. She took Rubin’s seminar, she says, because as journalist, she has learned the importance of infrastructure, having covered city planning or zoning board meetings where discussions of  — and decisions about — city infrastructure take place.

“When infrastructure is working, it is not something people think about,” says Li. “We don’t often think about the structure of roads or where our bridges are. But what we learned in the seminar is that it can have a huge impact on people’s lives in a way they don’t think about unless it’s not working.”

She and Sagustume hope that the online guide will encourage other New Haven citizens to become participants in an ongoing discussion of the city’s various infrastructure networks.

“We invite readers to make comments, which they can do after each chapter in the guide,” says Rubin. “Our hope is that the site will become a forum where people can converse more broadly about infrastructure. We chose this online format because we wanted to make it adaptable, to allow it to change and grow over time.”

Sagastume says he hopes the guide will inspire others — as it did him — to take a second look at the networks around them and to ask questions about whether they are working most efficiently and effectively.

“To repeat a platitude I used in the afterword of the guide, I think the biggest takeaway of this seminar for me is: ‘Interrogate the ground beneath your feet.’ I think the guide can help inspire us to do that.”

See “The People’s Guide to Infrastructure in New Haven.”