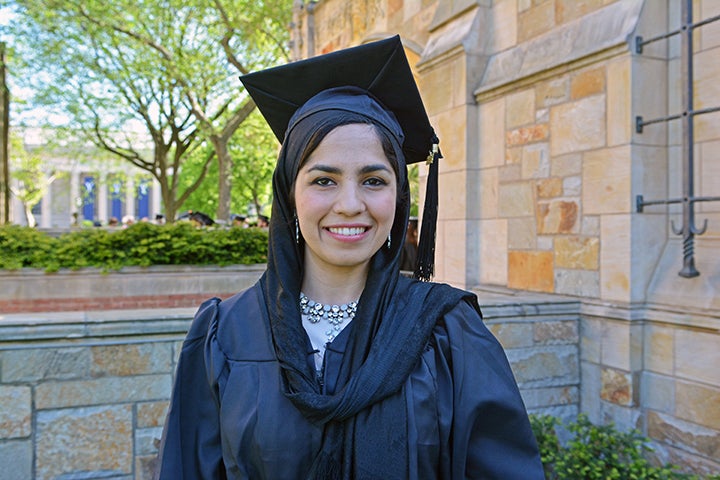 On the sunny afternoon of May 19, Wazhma Sadat ’14 of Timothy Dwight College (TD) became the first female Afghan student to graduate from Yale College, receiving a B.A. in global affairs with distinction in the major.

The new alumna traveled 6,667 miles from her hometown of Kabul to come to campus, but she has come a long way in more than distance.

“Coming to Yale, I didn’t know where I stood,” Sadat said.  “I came to Yale terrified of not being able to make it.”

She proved, in fact, that she could thrive. In addition to earning her Yale degree, Sadat founded Kamyab Afghanistan, a consulting and marketing firm that aims to empower female Afghan entrepreneurs, and during her years here, she served as president of Yale Afghanistan Forum, campus director for Two Degrees Food Company, peer liaison for the Chaplain’s Office, and a freshman counselor in TD.

Sadat was born in Kabul, Afghanistan, and was 5 years old when the Taliban first came to power in 1996. At the time Afghan citizens were uncertain about what was happening. “All we knew,” Sadat said, “was that we had to run into the basement and hide from bombs at three o’clock in the morning.”

Sadat’s family fled to Pakistan in 1998 so she and her sisters could continue to go to school. Her father gave up his job as an architect and sold shoes to support the family and his children’s education.At age 8, Sadat wove carpets to support her family. They lived there until fall of the Taliban in 2001, and then returned to Afghanistan only when they could freely go to school.

“Overall, one thing that has kept me going is reading,” she says of that time in her life. “Throughout all those years of war, one thing I always had with me was books.”

“In a way,” she adds, “I began to value being deprived of education under the Taliban.”

Scholarship and reading have been important throughout Sadat’s life, both as support in hard times, and as the means to new opportunities, she said. Her English skills, strengthened by her reading, allowed her at age 14 to take a highly competitive exam to study abroad in the United States. It was her participation in the U.S. State Department’s Youth Exchange and Study (YES) program that brought her to the U.S. for her senior year of high school.

At that time, “I could not even picture America,” Sadat recalls. “I just wanted to attend and succeed in a more academically challenging environment … something that was more than what the Afghan education system offered at the time.”

In the fall of 2006, Sadat came to the United States to attend a public high school in Florida, where she lived with a host family and was thoroughly immersed in the English language and in American culture.

Not only were the cultural differences great, Sadat found herself confronting the fact that she, like many other Afghans, no longer knew how to live in a country without war. It took time to learn to fall asleep without listening for the sound of bombs, she said, and to get used to planning for the long-term, rather than living day by day.

In addition, the young woman faced other new challenges — including confronting the prejudice and ignorance on the part of some of her fellow students, and tackling the academic struggles of studying in another language. Her first graded assignment in her American history class received an F. But by the end of the year, because she had put in so much effort, she ended up outshining her fellow students and receiving an A+ in the course.

Despite the difficulties she encountered, Sadat said, she loved the diversity and appreciation of national history in America, and the kindness of her host family and friends. Upon her return to Afghanistan she traveled to remote parts of the country, recruiting other young Afghan students to participate in the State Department program.

When she graduated from high school (at age 15), Sadat had not yet considered attending college in the United States. However, during the following year, she took a job with the American Councils for International Education (ACIE) in order to help support her family, and there, once again, her devotion to reading and scholarship helped change the direction of her life. Sadat credits Ted Achilles ’58, a Yale alumnus working with the ACIE who used to lend her American scholarly books to read, with playing a large role in her decision to pursue a college education in the United States.

“He showed me not to be satisfied with the educational resources that were there; but that there was more,” she said.

The next year, while on a trip to New York City through her work with a USAID project, Wazhma traveled to New Haven to meet with a Yale Admissions Officer. Despite Sadat’s fear that she did not belong, the Yale admissions committee saw her potential: She applied for and was awarded a place in the freshman class of 2014.

Like many new freshman, Wazhma used to question whether she really belonged at Yale.  Coming from Afghanistan she had no standard by which to compare her academic performance with those around her, and feared that she would not do well. This led her to start from the very basics. In addition to schoolwork, she would study the basic history of one country and learn five new English words every day.

At first, the Yale student was afraid to tell people that she was from Afghanistan, and to correct the uninformed opinions of the region that her peers expressed in classes. However, before long she found her voice. She began speaking out about her past and standing up for her own opinions in class discussions. She spoke about equal human rights and the importance of believing in local civilians as a force to end conflict, namely the war in Afghanistan.

She even gave a public Ted Talk sponsored by Tedx Yale, concluding “the difference between me as a Yale student and all the women in Afghanistan is that one day someone came up to me and asked me what I thought. And that gave me the confidence to be where I am today.”

She also took advantage of being at Yale to delve deeper into academic study of Afghanistan and of war, studying the Taliban and genocide and ethnic conflict in her global affairs classes. She learned that “cultural trauma [can be] such a part of society that you can’t distinguish it from normal life.”

Sadat’s studies of the Quran inspired her to speak up rather than hide. “The Prophet was always a stranger,” just as she was, she said. “I learned about strong people who take challenges head on, and I definitely aspire to be like those people. … I learned to just be myself and be extremely sincere.”

The Yale student found her sense of belonging at Yale in communities such as Yale’s Muslim Students Association, where she prayed with other Muslim students every day, and in Timothy Dwight college, where senior year she became a freshman counselor, or “FroCo.”

“Knowing Wazhma greatly improved my experience,” said Cory Combs ’14, one of her fellow FroCos at TD. “Her lived example of kindness that needs no context was truly inspirational.”

Having graduated, Sadat now aims to return to Afghanistan to work on a project addressing the overlapping areas of the Afghan legal system and business, with the goal of increasing the number of women at the forefront of international trade in Afghanistan.  She will work at a USAID-led economic development project, and then travel to Jordan next spring to continue studying classical Arabic, the Quran, and Islamic Sharia law. Her long-term goals include going to law school to study the commonality between Islamic Sharia law and Western international law, in order to improve cooperation between the Muslim world and the West in the international legal sphere.

Asked what she would like to say to her fellow graduates in the Yale College Class of 2014, Sadat said, “I’d like to thank everyone, from the people who taught me how to play foosball in the TD buttery in the middle of the night to those who asked me about my day when there were bomb explosions minutes from my home in Kabul.”

As for what she would like to say to young Afghan students like she once was, the alumna had two pieces of advice: