Student Spotlight: Graduating senior Sophia Clementi to have a voice in international summit

Reading a story about democracy in The Economist a few weeks back, Yale senior Sophia Clementi was struck by a sentence in the article stating that young people are less likely to be heard than their elders in national political discourse.

That fact is why Clementi is thrilled to be participating this summer in the Y20 summit in Australia, where youth delegations from the G20 countries gather to make their own voices heard.

Clementi, an ethics, politics, and economics (EPE) major, is serving as the lead delegate for the delegation representing the European Union (EU) at the summit, which takes place in mid-July. In that role, she is responsible for organizing the EU delegates’ research efforts on particular summit topics, spearheading the group’s policy proposals, coordinating the EU delegation’s positions with its counterparts from other countries, and handling the logistics of travel to the summit.

“The opportunity to participate in the summit came when I’m thinking, ‘Oh my goodness, Yale is coming to an end!’ But meeting all these very young people [in the EU delegation] was very beneficial in reminding me that I’m going to have very cool experiences outside of Yale, too, and I’m going to take everything I learned here onward,” explains Clementi.

The Y20 summit was introduced in 2006 when the G20 nations started various outreach campaigns in an attempt to involve more stakeholders in their discourse. Since then, the summit has been hosted by the country holding the G20 presidency (currently Australia). Like G20 delegations, the young Y20 delegations create and present policy proposals on specific topics and then negotiate those proposals with their international counterparts at the summit.

Clementi learned about the summit while doing research for her senior thesis about Italy’s entry into the European Monetary Union. While exploring the Facebook pages of various institutions that might have information relevant to her thesis, she stumbled upon the page for Young European Leadership, the organization that selects the EU delegation, which was advertising for participants.

“I applied on a whim early this semester, was interviewed the next week, and got confirmation that I was accepted the day after,” says Clementi, who is an Italian citizen.

The opportunity to serve as a head delegate, she says, ties in nicely with both her academic interests and her extracurricular activities. Clementi was born in Italy in a region that once belonged to Austria, and she grew up speaking German and Italian. She later lived with her family in Milan, Vienna, Frankfurt, and London before moving to New York State, where she spent her high school years. At Yale, her principal interest has been European history and current affairs, as well as economics and international relations.

“I took every course that related even marginally to Europe,” says the Yale senior, who has also been actively involved in the Yale International Relations Association, helping to organize Yale Model U.N. conferences, among other activities, and serving as the association’s executive director. She is also a member of the Italian Undergraduate Society and the German Undergraduate Society. 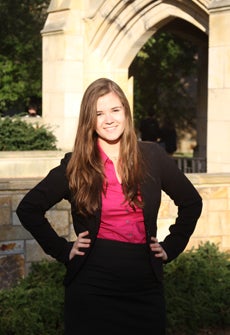 “I think my own background instilled in me a love of different languages, culture, and travel,” says Clementi, adding, “If you want to be an informed citizen, you can’t not know what’s going on outside your borders.”

This year, the Y20 delegations are focusing on the topics of sustainable development, job growth and economic growth, and global citizenship.

“What I think is important is that while the delegations are representing their countries with respect to these issues, we are not in any way confined by the official positions of those countries,” comments Clementi. “So it’s not a mock scenario where if you are from Mexico or the United States, for example, you have to take the official positions of those countries. We are really allowed to freely voice our opinions.”

Clementi traveled to Brussels for a week just before spring break to meet with her fellow EU delegates in preparatory meetings and has spent the past few months communicating on the social platform Yammer with Y20 delegations from around the world about the summit topics and the evolving policy proposals concerning those issues.

“Even during senior week, I’ve been telling my friends I have to go home to do some work in preparation for the summit,” says Clementi. “They are always saying, ‘You’re supposed to be enjoying graduating,’ but I say, ‘No, I really like getting involved with something else.’”

The Yale senior believes the summit topics are pressing ones for young people internationally and says that she is excited — and consoled — by her interactions with her own and other youth delegations.

“It’s an absolutely incredible experience,” she says. “What has been really exciting for me is to see people from all over the world who have the same interests. To be able to talk to someone who is a youth leader in South Africa or Saudi Arabia — or anywhere in the world — and see how much we do agree has really been refreshing. The actual disagreements that we have on issues are really minor, and that’s been great to see.”

As a college student, Clementi is among the younger Y20 delegates, who also include graduate students and young professionals in the profit and non-profit sectors. She was especially excited to learn that her friend Sihini Trinidad, who was a visiting student from Mexico at Yale last year, is representing her home country at the summit.

In her role as a head delegate for the EU, Clementi will also be responsible for negotiating which policy proposals will be presented to the G20 president and for assisting in the writing of the final communiqué outlining those proposals, which the president will later share with other G20 leaders.

“I think the Y20 might be the most direct way that youth can get their opinions heard really directly by G20 leaders,” she says. “It’s a way for us to show what is on our minds and to share what is important to us. We understand, of course, that policies are complicated and so we are not expecting that every one of our proposals will be implemented, but at least we serve as a strong voice.”

Clementi says her Yale courses have prepared her well for her role on the delegation, and notes that her professors encouraged her not to miss the opportunity to take part in the Y20.

“One of the huge benefits is that we are creating a group of people who will know each other well at the end of the process, who are really interested in changing and moving things forward in their own countries. We’re being tied into the international process and global decision-making process early, and hopefully we will keep interested and keep going farther in that.”

After the summit, Clementi will begin work for two years at a consulting firm in Munich, and hopes eventually to earn a master’s degree in public policy.

As she prepares to leave Yale, she says, she is particularly happy to “have a sizeable group of professors to whom I would consider myself very close.

“Some of my goodbyes with professors were just as hard as the goodbyes I will have with my friends come Monday,” says Clementi. “I think that’s a testament to how involved the professors are in undergraduate teaching here, and how much they care.”