When he was in high school, Christopher Howell had a couple of teachers who predicted he’d never amount to anything.

“I wasn’t the ideal student,” acknowledges Howell. “I was more interested in pranks and goofing around.”

Next week, the 31-year-old Howell will graduate from Yale with a B.A. in humanities, and he will spend the coming year helping to oversee the expansion of the Warrior-Scholar Project, a program he co-founded during his time on campus that helps veterans — like himself — transition from the military to college.

Howell served for nearly a decade in the Australian army before he was admitted to Yale through the university’s Eli Whitney Students Program, which is designed for exceptional students who have had an interruption in their education for five or more years. Despite the break in his schooling during his years of service, Howell never quite believed his high school naysayers, and believes his own graduation is a testament to the success that other veterans can achieve in college.

After finishing his senior-year exams and papers, Howell spoke to YaleNews about his college experience, the Warrior-Scholar Project, and his future plans. This is what we learned:

Surviving the selection: After high school, Howell took a 3D animation and graphic design course and did freelance work in design before enlisting in the army at age 19. While he enlisted just a month after the 9/11 terrorist attack, he had wanted to join the army since he was in high school, with the goal of going into the Australian Special Operations Command.

After completing basic training and infantry school, he applied for special operations in 2002, and — after passing aptitude tests, personality profiling, and other skills tests — began the grueling, three-week selection course in 2003.

“The selection course is where they basically make a mess of you,” says Howell. “Your resiliency is really put to the test through experiences that include sleep deprivation, completing tasks in unattainable time frames, and so on. They basically want to see what happens to you when you are broken down and at your most exhausted, and large numbers of people don’t make it through. Less than a quarter of those tested get through it.”

Howell did make it through, and spent six years in the 2nd  Commando Regiment, serving with the special forces unit for nearly half a year in Afghanistan in 2006. After he returned home, he was assigned to the Tactical Assault Group (TAG), the domestic counterterrorism and hostage rescue unit.

“That’s a very busy job because you are continually training for special operations, and a lot of the training involves activities that are inherently dangerous,” Howell says. In some training exercises, for example, Howell and the other members of the unit took on the role of hostages, and stood still as fellow teammates shot targets placed around them in close proximity.

“I think the people who go into special operations have a contempt for quitting, and we’re strangely comfortable with our own discomfort,” Howell says of the experience.

Academic calling: In 2008, Howell decided it was time to attend college — a long-time goal, he says, that he had deferred. He applied to the University of Sydney and was accepted into its lowest-tier undergraduate program.

“I think it was a wise decision on my part to not go to school right away,” Howell says. “The military was really good for me, because it focused me and also taught me a good deal of self-control. I’m rampantly hyperactive, and it helped with that. But I had never intended to make the military a lifelong career.”

Before he matriculated, his younger brother David, then an undergraduate at Sydney University, began preparing Howell to be a student.

“David was doing really well in school, and so he devised a method to teach me to read and write at the college level,” explains Howell. “We jokingly called his method — which David assembled from a whole bunch of other techniques — ‘Ninja’ reading. It’s basically a technique that allows you to break down what you are reading into manageable bites. Instead of focusing on every word, you actively look for where the ideas are in an academic piece. For military people, it’s a system that seems to make sense and work.”

Howell recalls that one of the first books his brother assigned him to read was Yale history professor Paul Kennedy’s “The Rise and Fall of the Great Powers.” While his team went off for lunch, he’d volunteer to stay in the training facility to guard the weapons and read.

On the same day he was admitted to the University of Sydney, Howell put in his request for discharge from the regular army and he transferred to the 1st Commando Regiment, a reserve special operations unit. After his discharge, he spent several months tagging along with his brother at school, and tackling the reading and writing assignments David continued to give him.

Aiming high: Howell credits his brother’s preparation with helping him to get off to an exceptional start at the University of Sydney, where in his first year he won two prizes for being at the top of his class in the Department of Government and International Relations.

With his high marks, Howell decided to apply to Yale’s Eli Whitney Students Program, which he learned about while researching schools while still in the army.

“The Eli Whitney program is for mature-age students with some kind of unique background, and I thought that maybe I could qualify if I did really well at the University of Sydney. I set out with that goal when I started school, and when my marks came back and I saw how well I did, I applied. I looked at other schools, but I only applied to Yale. So for me, it was Yale or bust.”

He remembers the exact date he was accepted in June 2010, and he says he immediately began packing his bags to travel to New Haven.

A stimulating environment: Howell says his four years at Yale have been everything that he had hoped and dreamed.

“I’ve loved it here,” he says. “This is a very special place. What makes Yale spectacular is the combination of its academics — being taught by some of the most brilliant minds on the planet — and my fellow students, who are all highly intelligent and engaged. It is always exciting to be in an environment like that.”

A meeting of like-minds: In his first year at Yale, Howell was introduced by Nick Rugoff  ’11 to Jesse Reising ’11, whose own hope of joining the military was derailed by a serious football injury in his senior year. After the accident, Reising was considering ways to be of service to military veterans and learned about Howell’s transition to college. The three new friends founded the Warrior-Scholar Project, an intensive “academic boot camp” designed to prepare veterans for college.

The Warrior-Scholar Project, which began at Yale in the summer of 2012, incorporates the “Ninja” reading technique that Howell learned from his brother (and that is still taught by David). It also helps veterans with their writing; prepares them for the social, emotional, and other challenges they might face in college; and shows them how some of the skills they learned in the military can be utilized in an academic environment. The project is part of a non-profit organization that Howell, Reising, and Rugoff co-lead called Operation Opportunity, which assists veterans and their families.

“Working together with Jesse and Nick has been one of he more rewarding things I’ve done,” says Howell. “Transitioning from the military to college is a huge adjustment, and the Warrior-Scholar Project addresses the specific needs of veterans in that process. It’s been a tremendous success, and I am very proud of that.”

Howell invited some of his favorite Yale professors to volunteer as tutors in the Warrior-Scholar Project, and all those he invited — including Kagan, Kennedy, Gaddis, Thompson, and Charles Hill — have been eager participants for the past two years. 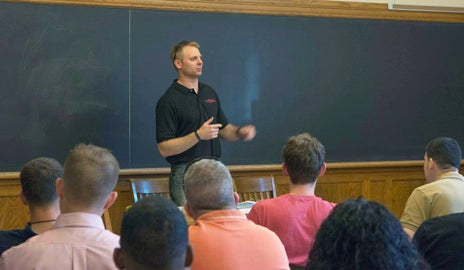 “Somebody should make a movie about [Chris’] story,” comments Gaddis, adding that under his direction, Howell wrote “the best senior essay I’ve seen on the meaning of the term ‘grand strategy.’”

Continuing the mission: Howell says it is a myth that veterans are less likely to succeed in college, pointing to a recent study that shows that they are, in fact, more likely than their non-military peers to graduate.

“What we have found is that enlisted veterans massively underestimate what they are capable of in the classroom, and so one of our aims in the Warrior-Scholar Project is to help them adjust their attitude about school and what they believe they are capable of, and inspire them to be leaders in the classroom. For older veterans, for example, loneliness can be a big issue when you are going to be around 18- to 22-year-olds every day. But even that comes down to how you approach your peers.”

Last year, the Warrior-Scholar Project at Yale was expanded to allow the participation of even more veterans, and this summer it will be launched at Harvard University, where Reising is now a law student, and at the University of Michigan.

“We also have another dozen or so schools that are interested in starting the program on their campuses,” says Howell. “So in the near future, assisting in those efforts will be my main focus.”

Gaddis notes that the Warrior-Scholar Project “is becoming a national model for preparing recently returned enlisted veterans to take full advantage of the ‘higher’ educational opportunities they so richly deserve.”

In addition to the start of the Warrior-Scholar Project, during Howell’s time at Yale ROTC returned to campus and the Yale Veterans Association — of which he is a member — was founded. He welcomed both of these events.

“Yale’s support of its student veterans has been phenomenal,” he says. “The university is an incredibly welcoming environment in that respect.”

He also got to welcome his younger brother to the campus when David arrived last year as a Brady-Johnson Predoctoral Fellow in International Security Studies.

Howell says he expects to feel “profoundly nostalgic” on graduation day, but is looking forward to his unfolding future.

“Long term, I would like to go to graduate school in some capacity,” he says. “There are a lot of different places I can go, and I’m more than happy to let the river take me where it does. I came to Yale with a very open mind, and it made all kinds of things possible. I leave here with that same mindset.”