Next freshman class already one for the record books 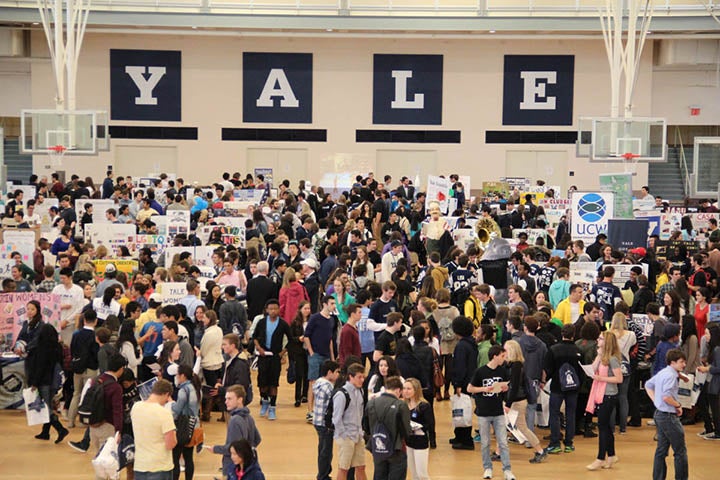 A record-high number of students applied to Yale College this year, and now the Office of Undergraduate Admissions reports that 71.7% of those who were admitted have accepted Yale’s offer to join the Class of 2018. This represents the highest “yield rate” on record for the college, and an increase of more than three percentage points from the previous two years.

The number of students planning to matriculate at Yale this fall exceeded the admissions office’s expectations, notes Dean of Admissions Jeremiah Quinlan, so only 10 to 15 offers of admission will be made from Yale’s waiting list.

“Any way you look at it, the incoming Class of 2018 is extraordinary,” said Quinlan.  “We anticipated that the overall yield would increase slightly because we admitted more students through our Early Action program, but we were very pleased to see that the largest increase in yield came from students who applied through our Regular Decision program.”

Earlier this year Yale made a series of commitments to the White House to help expand college opportunity, especially for low- and middle-income students. The admissions office has successfully fulfilled many of these commitments, and the Class of 2018 contains more high-achieving low-income students than previous years, said Quinlan.

Since 2008 Yale’s financial aid policies have ensured that no student is required to take out loans to pay for their Yale education, and families with less than $65,000 in annual income are not asked to make any financial contribution. Fourteen percent of the incoming freshmen will be the first in their families to graduate from a four-year college or university, compared to an average of 12% in the previous three classes.

In addition, 79 incoming freshmen are finalists in the QuestBridge National College Match, a program that helps high-achieving low-income students gain admission to selective colleges. Since Yale’s partnership with the program began in 2007, approximately 60 QuestBridge finalists have enrolled each year. Although financial aid awards are being finalized, already the number of students receiving need-based Pell Grants increased 21% compared with the Class of 2017; nearly 16% of the U.S. citizens/permanent residents qualified for the federal program for low-income students.

Yale received a record high 30,931 applications from freshman admissions this year, an increase of 4.4% over the previous year. Of these, 1,935 students were offered admission, and the rate of admission was 6.3%.