Student Spotlight: For gymnast sisters, it’s all for the team 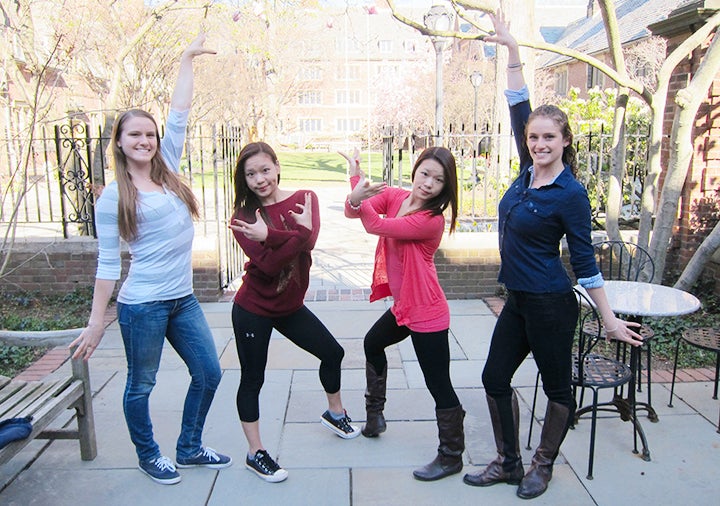 Every so often Morgan Traina ’15 has a spat with her younger sister, Kacie ’17. But when they are at a gymnastics meet, Kacie is her sister’s biggest cheerleader.

The same holds true for Tabitha Tay ’14 and her twin sister, Nicole ’14.

“If I didn’t do a routine well, I’d want Nicole to do hers well,” says Tabitha.

“I get more nervous about Morgan nailing her routine at a meet than I ever get about myself,” Kacie comments.

When the Tay twins came to Yale nearly four years ago, it was the first time the women’s gymnastics team had a set of sisters concurrently on the squad, notes Barbara Tonry, who has coached the team since it started in 1973. When Kacie joined her older sister at Yale this past September, the Trainas became the second set.

All of the sisters concur that — however rare it is — having a sibling alongside them on the team is a huge bonus.

“At first I was apprehensive when Kacie was looking at Yale,” acknowledges Morgan. “I thought, ‘We’ve always been at the same school. Would it be weird?’ But it’s the best. She’s my best friend on the team, and she was always my best friend growing up. She’s always there for me, and she’s like a mood lifter when we get to a meet. She’s just an amazing moral support.”

Nothing but love, in the gym: The Tay sisters pause when asked if they, too, are best friends.

“It’s hard to say we’re best friends when we fight so much sometimes,” Tabitha laughs. “But Nicole knows me best.”

The Tays, who are from Singapore, are in agreement, however, about the kinds of fights they have.

“They are always over random and silly stuff,” Nicole says. “When we Skype our parents, we’ll fight over who is going to talk first, or whose computer to use. We recently bought one bottle of liquid soap and fought over that!”

“We’ve never had a big fight, and I don’t think we ever will,” adds Tabitha.” Our fights last 10 minutes at the most and then they are over and we’re fine.”

The twin sisters are truly harmonious, however, when it comes to gymnastics.

“When we were younger and always doing the same four events [beam, uneven bars, vault, and floor], we might have been a little bit competitive with each other,” Nicole recalls. “But now we are much more supportive. In college, gymnastics is very much a team sport, and we need everyone to do well for all of us to do well.”

Even before coming to Yale, Tabitha and Nicole say, they were usually thrilled by each other’s success. A highlight of their gymnastics career was during the 2007 Southeast Asia Games, when the sisters tied for a gold medal.

“It was really special,” Nicole says. “We had the same score to the sixth decimal point, and there was no way to split the score. Even though we had a different score for each event, we came out even.”

Shining singularly: At Yale the twins excel in different events: Nicole’s specialty is the uneven bars and the balance beam, and Tabitha’s is the vault and floor. This season, due to a wrist injury, Tabitha has only competed in floor routines.

The Traina sisters, on the other hand, compete in all four gymnastic events. Morgan has a reputation for her skill on the balance beam and bars, and the latter is Kacie’s favorite event in competitions. Kacie was unable to compete this season while recovering from an elbow injury she experienced before coming to Yale, but has recently started practicing on the floor again.

Tumbling joy: Both the Tays and the Trainas began gymnastics at a very young age. Morgan says her interest in the sport began after watching Shannon Miller in the 1996 Olympics.

“I thought she was the coolest person,” says Morgan. “She had curly hair, and I had curly hair. I asked if I could start gymnastics and my mom initially said no. I kept begging. Finally, when I was around the age of 5, my mom let me join a recreational program.”

By the time she was 9, Morgan advanced from tumbling exercises to actual competitions, and Kacie — having spent so much time at the gym watching her sister —just “fell into gymnastics, too,” she says. “I always wanted to be like my older sister,” she says.

“I enjoyed learning all the skills and the routines,” Kacie adds. “You gain a lot of strength and grace from gymnastics as well as learn lessons that are helpful in other areas of life, such as setting goals and working hard to achieve them.”

The Traina sisters eventually began competing at the elite levels, and while Morgan knew that she wanted to pursue a college education, Kacie considered putting it off to continue high-level gymnastics. A series of injuries got in the way of her dream, and when she began applying to colleges, she was determined to attend Yale.

“I heard Morgan talk about her coaches and the team, and I just wanted more than anything to be here, too,” she says. 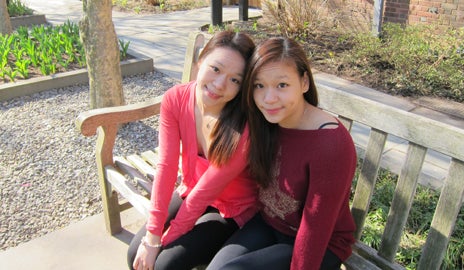 From small to spotlight: The Tays, who are identical twins, were involved in ballet and piano lessons when a coach saw them doing tumbles in a third-grade gym class and thought that their small size and energy were well suited for gymnastics.

“Our mom really hated the idea of it,” says Nicole. “She did gymnastics as a child and broke her leg so she never really liked the sport. She gets so nervous for us that she still can barely watch us perform, and hasn’t seen one of our meets in person for a long time. At meets, she used to sob in the bathroom and then ask us afterwards how things went. Now she likes to watch us in videos of the competitions.”

By the time they were 12, Nicole and Tabitha were on Singapore’s national team, training 40 hours a week.

“I loved being in the gym and tumbling all day,” says Tabitha.

Nicole says she particularly enjoys bars because of the “smoothness” of the movement.

“There’s no stopping during the routine — you just do it and get it done and stick the landing,” she explains. “And I like the swinging.” 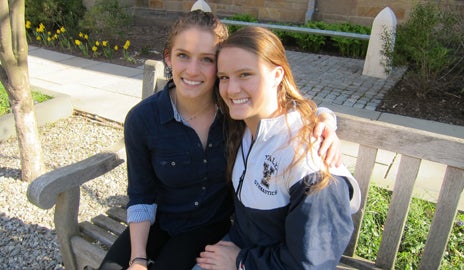 The right words: The age difference between the Traina sisters meant they never had to compete against each other as they were growing up, but Kacie fondly recalls how she, Morgan and their younger sister, Samantha (a former gymnast who now dives competitively) competed against each other on the family’s backyard swing set.

“We used to do flips and have our father score us,” remembers Kacie, adding that she and her sisters were also highly competitive playing family board games. “We can’t even play any more, that’s how competitive we get,” she says.

At a gymnastics meet with her sister, however, Kacie — who describes herself as the quieter sister — is always an encouraging voice for Morgan, even when the elder sister might not acknowledge it.

“Kacie always knows what to say to me, even if I sometimes don’t want to hear it, such as if she is correcting me on a skill. So I might sometimes get a little snappy with her, “ admits Morgan. “But she’s always right, and you can’t argue with her. She’s very sweet, and she never fights, so I always have to apologize.”

Beyond the gym: Morgan came to Yale expecting to be on a pre-med path, but later decided to major history of science, medicine, and public health.

“I love studying epidemics and how they spread and are treated, but realized I don’t actually want to treat people,” she says. “When I discovered my major, I wanted to take every class offered in it.” She spent last summer working at a medical center near home in southern California, where she examined the issue of infection prevention and control. Her goal is to go on toward a master’s degree in public health, possibly combining it with an M.B.A. At Yale, she’s a member of the sorority Pi Beta Phi.

In pursuit of her goal of becoming a veterinarian, which she’s been set on since childhood, Kacie plans to major in ecology and evolutionary biology. She hopes to volunteer with a local veterinary practice near home this summer, and was especially excited to learn recently about Yale’s new Canine Cognition Center.

“I’ve always loved animals and science,” says the freshman, who participates in Athletes in Action, a student-led sports ministry on campus.

Nicole and Tabitha are both majoring in biomedical engineering and work in the laboratory of Mark Saltzman, the Goizueta Foundation Professor of Biomedical Engineering, Chemical and Environmental Engineering, and Physiology. There, Nicole is working with nanoparticles to forge a chemotherapeutic drug, while Tabitha is fabricating polymer films to cap reservoirs that are used for drug delivery systems.

“One of the great things about the biomedical engineering major is that there are great research opportunities on campus,” says Nicole.

The twins also share a love of languages (both speak five languages) and of dance, and are members of the non-audition student ensemble Yale Danceworks.

After graduation, both Tay sisters will move to London for graduate school in biomedical engineering. Tabitha will attend Imperial College, and hopes eventually to teach. Nicole intends to pursue a career in research, and is still considering where to further her education.

“I don’t like speaking in front of large groups, so I’d hate to teach,” says Nicole, who, both sisters agree, is the more reserved of the two.

The season’s ending: While the Yale team did not qualify this year for the U.S.A. Gymnastic Women’s Collegiate National Championships (it ended its season finishing fifth in the ECAC championships), six gymnasts qualified to compete as individuals in the post-season national championship held at Brown University, including Nicole and Morgan. Nicole scored a 9.55 on the uneven bars at the event and says “it was a great end” to her college gymnastics career, while Morgan scored 9.85 on the bars and made Second Team All-American at the event.

Their sisters, as well as the others members of their team, cheered them on.

“Our whole team is really like a family,” says Tabitha. “Aside from our time at the gym, we watch movies together, eat Froyo together, do homework together, and we can talk to each other about everything. We’re lucky to have our own sisters on the team, but the truth is, everybody on our team is like a sister to us.”