Small in size but large in scope: Dance Studies at Yale

When theater studies major Aren Vastola ’14 found himself without a space to stage a formal production for his senior project, he turned “lemons into lemonade” and decided to pursue something entirely new and different.
By Bess Connolly
Share this with Facebook Share this with Twitter Share this with LinkedIn Share this with Email Print this 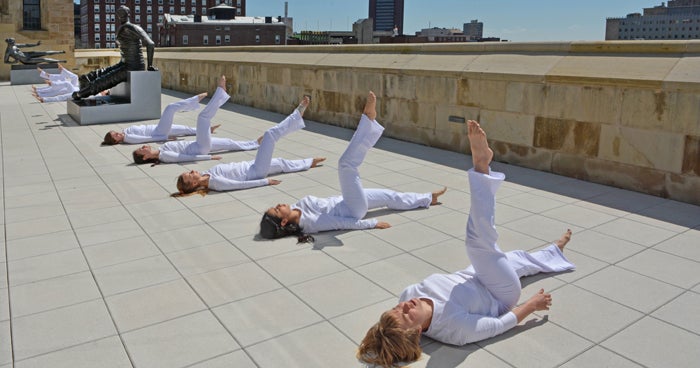 When theater studies major Aren Vastola ’14 found himself without a space to stage a formal production for his senior project, he turned “lemons into lemonade” and decided to pursue something entirely new and different.

Vastola, who is part of a growing number of undergraduates pursuing the Dance Studies at Yale curriculum within the university’s Theater Studies program, chose a non-traditional space for his senior project: the Yale campus. He delved into the choreographic nature of non-dance situations such as dropping a pencil and picking it up. The subtle, micro-dance pieces were staged by performers around campus. “I examined things like rhythm, and time, and space, and explored how you engage with those in your everyday life,” he explains.

“It was a very nuanced and sophisticated senior project,” says Emily Coates ’06, ’11 GRD, a lecturer in Theater Studies who has directed the Dance Studies at Yale curriculum since its inception in 2006 and was Vastola’s senior project adviser. “It affected my entire perspective of Cross Campus as I was sitting there on a sunny afternoon watching Aren.”

With just seven courses, Dance Studies at Yale is tackling some of the key points of the university’s research and teaching mission — including interdisciplinary dialogue and international scope — by forging ties both to countries around the world and between science, the arts, and the humanities.

One of the ways Dance Studies at Yale is addressing a diversity of international dance forms is with the course titled “West African Dance: Traditional to Contemporary,” taught since 2007 by Burkinbe artist Lacina Coulibaly.

For Vastola, who is contemplating a career as a performer and a choreographer after he graduates, the curriculum offers two ways of understanding dance as a discipline. “I think Emily manages to synthesize a very scholarly critical approach involving extensive reading and a lot of historical context. But, with her past dance experience, we can also delve physically into the movement,” he says. “I feel like it just becomes a lens that I see my other classes through. I focus on dance academically as well as extracurricularly.”

“Every year since 2006 there is some development or advancement with regard to the presence of curricular dance on campus. This year it was for both incoming and outgoing students to have greater information available to them,” says Coates.

The university has enhanced its career services in the arts by hiring a dedicated creative and performing arts career adviser, and has also established a new career database. Compiled by Elena Light ’13, the database includes an online resource for students interested in pursuing dance professionally — be it as a dancer, choreographer, arts administrator, dance writer, or scholar.

The resource provides suggestions for students just beginning to pursue a career interest in dance. It also includes a lengthy list of internship opportunities and dance audition/career databases “that students can use as a jumping off point,” says Light. “Hopefully, this will help current students with the job search, and it will also encourage prospective applicants to choose Yale, since they know they’ll be supported as they look beyond Yale into the future.”

“I think of the dance studies curriculum with great passion as contributing wholeheartedly not only to the teaching but also to the research mission of Yale,” says Coates.

Coates also directs Yale Dance Theater (YDT), for which Vastola serves as a student coordinator. Yale Dance Theatre is a faculty-directed extracurricular initiative that enables Yale students to work with professional artists on the reconstruction of existing choreography and/or development of new work. YDT is a practice-based research initiative that allows students to investigate choreography and its historical context through a semester-long rehearsal process, resulting in a final public performance. YDT is sponsored by the Arts Discretionary Fund in Yale College in cooperation with the Dance Studies at Yale curriculum, Theater Studies Program, and Alliance for Dance at Yale.

Under the direction of Coates and Iréne Hultman, rehearsal director for Trisha Brown Dance Company, the YDT students will present the final showing of a semester-long intensive on the choreography of Trisha Brown on Wednesday, April 16 at 8 p.m. at the Cooperative Arts and Humanities High School, 177 College St. For more information and tickets, visit the event’s website.