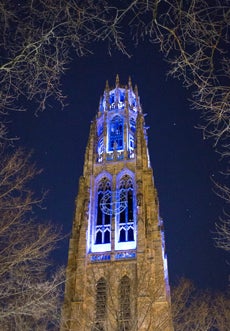 In honor of World Autism Awareness Day, Harkness Tower will glow bright blue on the evening of Wednesday, April 2 as part of the “Light It Up Blue” awareness campaign.  This symbol of support for those affected by autism is just one of the events sponsored by Yale for Autism Awareness (YFAA), an undergraduate organization that works to raise autism awareness on Yale’s Campus.

Every year, autism organizations around the world celebrate the day with fundraising and awareness-raising events. The latest statistics on autism prevalence are sobering. The Centers for Disease Control and Prevention (CDC) reports that 1 in 68 children are diagnosed with an autism spectrum disorder. Autism occurs in all racial, ethnic, and socioeconomic groups, but are almost five times more common among boys than among girls. More individuals are being diagnosed with autism than ever before, but many fundamental questions remain unanswered, including what causes autism and how do we treat it.

According to the organizers, “On this day we unite to show our solidarity and support for those affected by an autism spectrum disorder. We raise awareness and money to help improve the lives of those touched by autism.”

During the day on April 2, the group will spread the word on Cross Campus, which will be filled with many opportunities to learn more about autism. Lawn signs will be displayed that detail facts about Autism Spectrum Disorder, with an emphasis on the diversity of individuals affected. Additionally, members of Yale for Autism Awareness will be stationed around Cross Campus informing people about autism and distributing informational pamphlets.

In addition the educational opportunities on Cross Campus, the Woolsey Rotunda will be home to a gallery of artwork created by adults with autism from Chapel Haven, a New Haven-based transition program that serves adults with autism, in collaboration with volunteer Yale students. The works were created on March 25 by 60 students from Yale and Chapel Haven.

As a Dwight Hall member group, YFAA focuses on providing Yale students with “active” awareness opportunities that allow students to engage and work with individuals with autism. Yale for Autism Awareness strives to help improve the lives of those affected by autism.