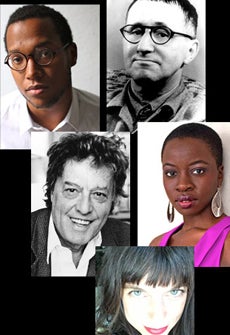 Yale Rep’s 2014-2105 season will also feature three titles, to be announced in the fall, presented as part of the “No Boundaries” series of global performances.

“Yale Rep’s 2014-2105 season offers an astonishing lineup of gifted theater artists and a breathtaking diversity of emotions, experiences, and perspectives that ultimately reflect and celebrate our shared humanity,” says James Bundy, artistic director of the Rep and dean of Yale School of Drama. “I’m delighted that Yale Rep continues to be a home for work by artists such as Tom Stoppard, Danai Gurira, Rebecca Taichman, Liz Diamond, and Jackson Gay, who are well known already to many Yale Rep audience members, and I’m thrilled to introduce Branden Jacob-Jenkins, Lileana Blain-Cruz, and Sheila Callaghan, all of whom are making their Yale Rep debuts.

The schedule for next season’s plays, with a brief synopsis of each, follows.

Oct. 3-25 — “Arcadia,” directed by Bundy. Amidst illicit passions and professional rivalries on an English country estate, a brilliant young pupil proposes a startling scientific theory well beyond her own comprehension. More than 200 years later, two academic adversaries try to piece together puzzling clues from the past in their quest for an increasingly elusive truth.

Stoppard is the four-time Tony and Academy Award winning author of “The Coast of Utopia,” “Rough Crossing” (produced at the Yale Rep in 2008), and “Shakespeare in Love.” Bundy’s Yale Rep credits include “Hamlet,” “A Delicate Balance,” and “A Woman of No Importance.”

Nov. 21-Dec. 13 — the world premiere of “War,” directed by Lileana Blain-Cruz. “War” is a portrait of a family navigating the landmines of the past as its members try to broker peace with each other — and themselves — in the present. Tensions escalate between Tate and Joanne at the hospital bed of their comatose mother. As they attack each other’s smallest words and biggest choices, they are ambushed by two strangers who make a shocking claim about their grandfather’s WWII tour of duty.

Branden Jacobs-Jenkins makes his Yale Rep debut with the premiere of “War.” His other plays include “Neighbors,” “An Octoroon,” and “Appropriate.” Blain-Cruz recently directed Christina Anderson’s “Hollow Roots” for The Public Theater’s Under the Radar Festival.

Jan. 30-Feb. 21 — the world premiere of “Familiar,” directed by Rebecca Taichman. The Yale Rep commissioned this play, in which Marvelous and Donald — in a snowy Midwestern suburb — are preparing for the marriage of their eldest daughter. Clashes erupt within the family when the first-generation American bride-to-be insists on observing a traditional Zimbabwean wedding ritual. The play explores the complicated relationships between mothers and daughters, sisters, wives and husbands, the customs they keep, and the secrets they keep buried.

Born and educated in the United States and raised in Zimbabwe, OBIE and Whiting Writers Award winner Gurira is the author of “Eclipsed” (staged at the Yale Rep in 2009), the Pulitzer Prize finalist “In the Continuum” (co-written with Nikkole Salter and performed at the Yale Rep in 2007), and “The Convert.” Taichman’s previous Yale Rep credits include the world premieres of David Adjmi’s “Marie Antoinette” and “The Evildoers.”

March 20-April 11 — “The Caucasian Chalk Circle,” directed by Liz Diamond. In the entirely fabricated country of Grusinia, a sturdy young servant named Grusha rescues the abandoned baby boy of the governor overthrown in a violent palace coup. As civil order is restored, the exiled ruler’s wife returns to reclaim her child — and the two mothers bring their case before a cynical, battle-weary judge. The play traces the thin lines between law and justice, blood and family.

Brecht, a Bavarian-born playwright and poet, is also the author of “The Threepenny Opera,” “Life of Galileo,” “Mother Courage and Her Children,” and “The Good Person of Szechwan.” Diamond is the OBIE Award-winning resident director at the Yale Rep. Her Yale Rep credits include “The Winter’s Tale,” “Happy Now?” and “Saint Joan of the Stockyards.”

“The Caucasian Chalk Circle” is the Yale Rep’s 2014-2015 WILL POWER! production. The run includes two 10:15 a.m. performances on April 8 and 9, available only to high school groups. For information on WILL POWER! performances, contact Ruth Feldman at 203-432-8425 or rm.feldman@yale.edu.

April 24-May 16 — the world premiere of “Elevada,” directed by Jackson Gay. In present-day New York City, Ramona is going on many first dates but is intentionally sabotaging her chances for a second. Khalil, a social media superstar, is about to close a huge deal that will take him completely off the market. They’ll do anything to float above their own lives, even as fate tries to pull them both back down to earth. This romantic comedy explores the fear of being alone — and the fear of not being alone.

This Yale Rep-commissioned play was a finalist for the 2104 Susan Smith Blackburn Prize. It marks the Yale Rep debut of Sheila Callaghan, whose other plays include “That Pretty Pretty (Or, The Rape Play),” and “Roadkill Confidential.” Gay’s Yale Rep credits include “These Paper Bullets!” and “The Intelligent Design of Jenny Chow.”

The Yale Rep offers a variety of subscription packages, starting at less than $35 per ticket for the general public and $12 for students. Subscriptions are available at www.yalerep.org, by phone at 203-432-1234, and in person at the Yale Rep box office, 1120 Chapel St., during regular business hours: Monday-Friday, 10 a.m.-5 p.m., and until 8 p.m. on all performance evenings.

Individual and group tickets for the entire season will go on sale on Sept. 2.