As the March 31 deadline to sign up for health insurance under President Obama’s Affordable Care Act (ACA) fast approaches, a group of Yale students has revved up its efforts to educate New Haven area residents about their new health insurance options and what health care reform means for them.

The students — from the professional schools and Yale College — are part of Students for a Better Healthcare System (SBHS), a campaign founded last year that has so far helped explain the ACA to some 500 individuals at such local venues as community centers, schools, churches, health clinics, and more.

SBHS has two major goals: to promote the health of the community by helping New Haven area residents gain access to better healthcare, and to start a national dialogue about U.S. health care reform.

Four Yale medical students — Priscilla Wang, Matthew Meizlish, Ankit Kansal, and Lorenzo Sewanan — began SBHS about a year ago because they were concerned about the confusing and controversial nature of the conversation about the ACA, the nation’s most major health care reform in five decades. They have since enlisted the support of around a hundred students at Yale and nationally in their cause.

“There has been so much politicization of the Affordable Care Act, and there has been a lot of misinformation about it, as well as a lack of resources for people to get the information they need to understand it,” explains Juliana Berk-Krauss, a first-year medical student who is now one of the co-executive directors of SBHS. “It can be overwhelmingly confusing.”

“To begin with, a lot of people don’t even realize that the ACA and ‘Obamacare’ are one and the same thing,” says Smith. “All of the political debate surrounding health reform has shrouded the law. In our presentations, we are trying to help people understand that the ACA is both a law and a health issue, not simply a political issue. People think, ‘Obamacare — it’s a disaster,’ rather than ask: ‘Do I have health insurance? Do I need it? How do I sign up?’”

About 35 Yale College and professional students recently signed up to serve as SBHS “educators,” who make the community presentations. At their recent training session, first-year law student and SBHS education co-director Dani Isaacsohn noted that for many currently uninsured American citizens, the ACA will change their lives.

“Many people don’t know what it’s like to live a life of getting regular check-ups or preventive care, to not have to go to the emergency room for a cough,” he said.

First-year medical student Eamon Duffy, also a SBHS co-executive director, added that understanding the details of the ACA can even challenge the better informed.

“I’m a medical student, and I find it daunting,” he says. “Doctors don’t always know what it means or know what’s changing.”

In their short and accessible community presentations, SBHS student educators explain the basics of the ACA and inform community members how they can sign up (online on Connecticut’s insurance marketplace website or at New Haven’s walk-in enrollment site at 55 Church St.) and where to call for more information (1-855-805-4325). They also discuss why health care reform was needed and why there is still more to be done.

“We’re spending an enormous amount — 17% of our GDP — on healthcare,” says Berk-Krauss. “We’re using a lot of resources to take care of common and chronic illnesses. If we don’t do anything about reducing costs and streamlining our health care system, that amount could nearly double in the next 20 years. So it is crucial for our health and for our economy that we use this system properly.”

“Not every health care provider is up to date on the law, so we’ve been able to tailor our presentations to help inform health professionals about the ACA and how they can help present health care options to their patients, while continuing to provide quality care,” Smith says. 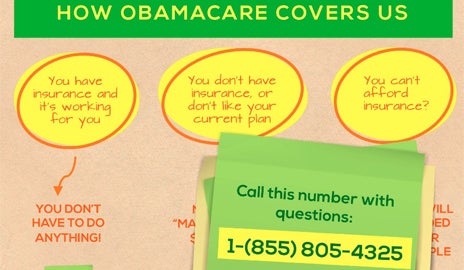 Spreading the word and the mission: The Yale group hopes to expand the Yale model to other medical schools and universities, and thus far nearly 20 universities have expressed an interest. This month, Berk-Krauss and other co-directors will share information about the SBHS campaign at the American Medical Student Association’s national convention in New Orleans.

“We’ve already developed well-designed and effective educational and volunteer training materials that other schools can use, so they don’t have to start from scratch,” says Berk-Krauss.

Berk-Krauss says that her time discussing health care reform in the community has been a welcome diversion from her medical school coursework.

“We have a lot of science classes in our first year, and my involvement with SBHS allows me to talk about real issues and public policy and do something I think really matters,” she says. “The medical profession is about giving back to the community, but it’s easy to lose sight of that when you are studying all the time. Helping in this campaign is so closely related, although indirectly, to what I’m going to be doing in the future, which is providing care.”

Smith, who is majoring in molecular, cellular, and developmental biology and is considering a medical career, adds that promoting health literacy is one of his special interests.

“I think it is important that physicians not just provide care but understand the law behind the care they provide,” says the Yale undergraduate, who helps train new SBHS educators.

While encouraging uninsured or underinsured New Haven residents to sign up for health insurance by the deadline is the most “urgent” focus for the SBHS volunteers, they say their campaign will continue to be important long after March 31.

“The health insurance marketplace opens again in November, and no matter how successful we are before the March deadline, there will still be people who haven’t signed up,” says Berk-Krauss. “We also want to help those who have signed up to optimize their health care coverage, and to educate them about the impact of this reform on their health maintenance. That, too, is really important. Many people’s lives will be changed when they have medical insurance.”

To learn more about the students’ campaign, visit the SBHS website.