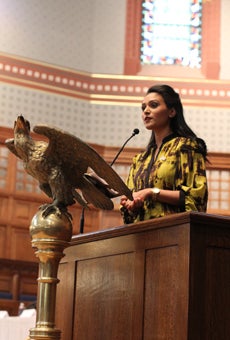 Before an audience of roughly 100 Yale students, faculty, and staff on Feb. 4 in Battell Chapel, Nina Davuluri — Miss America 2014 — shared her goal of spreading cross-cultural understanding and combating ignorance.

Last September, 24-year old Nina Davuluri became the first woman of South Asian descent to win the Miss America pageant. Following the crowning, some critics called Davuluri a “terrorist” while others stated that she was not “American enough” to represent the United States. Students from the Asian American Cultural Center (AACC) and the South Asian Society (SAS) responded to the racist commentary by organizing a dialogue to promote cross-cultural understanding.

Shortly after Davuluri won the crown, students from the Asian American Students Alliance at Yale (AASA) ran a “We Are Miss America” photo campaign in solidarity with Davuluri and to raise awareness among the greater community.

At the Tuesday talk, Davuluri explained that after facing similar attacks upon winning Miss New York, she learned to turn these harsh remarks into a positive opportunity to spread cultural competency.

“There are always going to be ignorant people,” Davuluri said. But by reaching out to the youngest generations, we can stop the spread of ignorance, she explained.

Davuluri grew up in a traditional Indian household but was surrounded by predominantly white peers in school. While she considers herself “first and foremost American,” she said her Indian heritage had always been central to her identity. Every year in high school, Davuluri and her older sister would perform a traditional Indian Bharatnatyam style dance for the school talent show. And as an undergraduate at the University of Michigan, Davuluri embraced what she called “brown town,” becoming an active member of the South Asian community and joining multiple South Asian dance groups.

Dedicated to her Indian heritage, Davuluri said that she was not willing to sacrifice a part of her identity in order to win Miss America. For the talent portion of the pageant, Davuluri performed a Bollywood dance despite constant nagging that she would need a more mainstream talent in order to win.

Now, in her role as Miss America, Davuluri pledges to continue spreading cross-cultural understanding. She has launched her own “Circles of Unity” movement, travelling across the country to talk to students, families, and businesses about cultural awareness.

Davuluri also highlighted her position as a role model for young girls. She explained that Miss America is not just about being beautiful — the organization seeks women who are educated, well-spoken and confident. Being beautiful is “just the icing on the cake,” she commented. 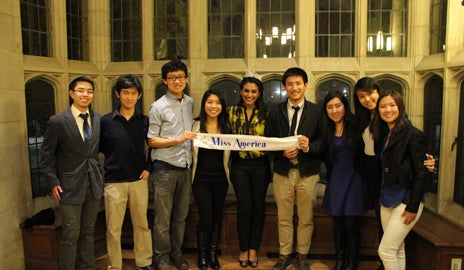 Still, Davuluri hopes that her win will help redefine the definition of beauty in America and India.

“For the first time, girls at home can say ‘this year, Miss America actually looks like me,’” Davuluri said.