Former Prime Minister of Spain José María Aznar will deliver a talk at Yale on the future of his country and other southern European nations on Tuesday, Feb. 11. 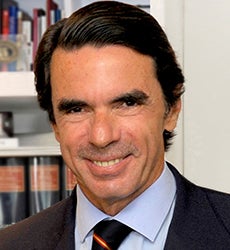 Titled “The Future of Southern Europe,” his lecture will take place at 2:30 p.m. in the Sterling Memorial Library Lecture Hall, 130 Wall St. Sponsored by the Office of International Affairs, the event is free and open to the public.

Aznar is a member of the board of directors of News Corporation, chair of the Friends of Israel Initiative, and a member of the International Advisory Board of the Atlantic Council of the United States. He is the honorary chair of the Partido Popular. He was elected head of the regional government of Castile-Leon in 1987. In 1989, he was chosen as the Partido Popular’s candidate for prime minister in the general elections. The following year he was elected chair of the party. Between 1989 and 1996, he was the Leader of the Opposition. T

hroughout his two terms as prime minister (1996-2004) he led process of economic and social reform. One of Aznar’s most serious concerns is the battle against terrorism. He is a strong supporter of the Atlantic Relationship project and the European Union’s commitment to freedoms and economic reform.