Ask questions and ‘explore like a bird,’ advises Justice Sotomayor

There is no shame in ignorance, U.S. Supreme Court Associate Justice Sonia Sotomayor told a packed crowd in Woolsey Hall during a campus visit to Yale on Feb. 3. In her talk, the alumna (’79 J.D.) candidly shared situations in her own life when she boldly asked questions if she had no idea what someone was talking about.
By Susan Gonzalez
Share this with Facebook Share this with Twitter Share this with LinkedIn Share this with Email Print this

There is no shame in ignorance, U.S. Supreme Court Associate Justice Sonia Sotomayor told a packed crowd in Woolsey Hall during a campus visit to Yale on Feb. 3. In her talk, the alumnus (’79 J.D.) candidly shared situations in her own life when she boldly asked questions if she had no idea what someone was talking about.

Sotomayor told her audience, which included an overflow crowd in Battell Chapel, that the adage commonly stated by teachers — that “there is no stupid question” — is true.

“There is only ignorance, and ignorance we can correct,” the justice commented. “[When you don’t know about something] it is just because you haven’t been exposed to it before.”

In a conversation with Judith Resnik, the Arthur Liman Professor of Law, Sotomayor related how she grew up in a poor Puerto Rican household in Bronx housing projects. Her mother made only $5,000 a year, and Sotomayor had no one to guide her in the college application process. When a friend at Princeton University who had attended her Bronx high school advised her to apply to a university in the Ivy League, she naively replied, “What’s that?”

The United States’ first Hispanic Supreme Court justice and only the third woman to sit on the nation’s highest court noted that even in her current post, she has sometimes bravely exposed her own ignorance.

“If a colleague said something I didn’t know … I would lean over to [now retired] Justice John Paul Stevens and say, ‘John, what is he talking about?’ He’d say, ‘Read this case; he’s been on that horse for a long time.’” She said she has also posed questions to her fellow justices during coffee breaks, continuing a habit she developed earlier in life of “quietly” asking questions of people she trusted.

During the Q&A with Resnik, Sotomayor traced her rise from hard-working but unsophisticated high school student to her 2009 Supreme Court appointment by President Barack Obama. Taking the advice of her friend, she recounted, she applied to Yale, Harvard, and Princeton universities. She described a rainy-day admissions interview at Harvard, where she met with a well-coifed, silver-haired woman wearing a pearl necklace in a room with white couches, an Oriental carpet, and two poodles.

“I looked at the scene, and I was so dumbstruck,” recalled Sotomayor. “It was something I had never experienced in my life. I’m not often short on words; it was the first time I ever clammed up.” She then told the audience that she fled the office after no more than 15 minutes, thinking, “I don’t belong here.”

She was equally out of her element during her first visit to Yale, where she was greeted by a group of Latino and other students of color who invited her to a campus protest, she recalled. That interview took place just before the end of the Vietnam War, and the students were talking about revolution in Cuba and elsewhere.

“I thought, ‘I’m just not going to be comfortable here,’” said Sotomayor. “Yale was too progressive for me. Yeah, strange, right?” She explained that she was raised in a Catholic household whose church’s monsignor supported the Vietnam War.

Sotomayor instead chose Princeton, where her “quieter” pre-admission experience simply involved her high school friend showing her around and introducing her to his friends. Still, it was a difficult adjustment for her as a student there, she told the audience, and she navigated her undergraduate years by forming relationships with other students of color, many of whom came from backgrounds distinct from her own.

“It was the first time I met people of color who were better off than I was,” Sotomayor said.

At Yale Law School, she continued to work on her writing, particularly legal writing, and became managing editor of the International Law Journal.

“It was that competitive spirt to improve myself step by step,” she explained, adding, “I don’t take big gulps.” 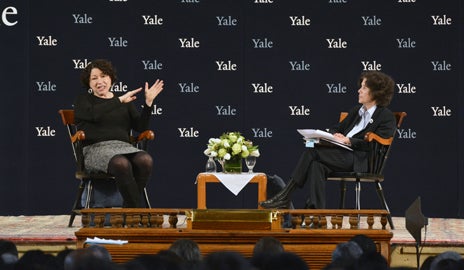 Her ascent to the Supreme Court, said Sotomayor, has also been marked by her efforts to continually improve herself.

“I may not be the smartest judge on the court, but I’m going to be a competent one,” said the justice. “I think my decisions are getting better. … I’m finding my voice.”

Sotomayor told her audience that she would not be where she is today without affirmative action, as it existed in her student days. Then, she noted, universities recruited students from high schools in wealthier communities and from prep schools, and affirmative action gave elite colleges “a reason to take a risk” by inviting “students from schools they knew nothing about.” After accepting her friend and then Sotomayor, Princeton increased the number of students it accepted from her Bronx high school, Cardinal Spellman, she said.

“Without affirmative action, I couldn’t have ever participated in the race for a good education because I didn’t even know there was a race being run,” stated Sotomayor.

She acknowledged that she continues to experience a sense of being “alien” today.

“Sometimes I do feel like I am not part of my world completely now,” she said, adding that she can feel equally aloof from the world of her childhood (because she has changed so much) and the one she inhabits as one of America’s most notable judges, where she is surrounded by many people whose backgrounds were very different from her own.

Yet, Sotomayor told her audience, when Obama selected her as a Supreme Court justice and advised her to “stay connected” to her community, she replied, “Mr. President, I don’t know how to do anything else.” She noted that she is committed to speaking to young people of color and from low-income backgrounds about their educational opportunities and to sharing with them her own experiences and tools for success. She works with admisssion committees at Princeton and encourages highly qualified, inner-city students to apply there.

Among the advice she gives them is to not be embarrassed by asking questions.

“That first year on the bench, I was walking into a continuing conversation,” she told her audience. “Most of the justices have been there for years together. … If I had been unwilling to show my ignorance and say ‘please explain,’ I think I would have felt lost longer.”

While never forgetting her roots, Sotomayor credited her experience at Princeton and Yale with giving her the opportunity to “enter into a larger community” than the one in which she grew up. While she advised young people in her audience to form relationships with people with whom they are comfortable, she also urged them to explore beyond. She compared her own journey to that of a bird, who uses its nest as a place of safety yet isn’t anchored by it.

“You go back to the nest when you need comfort, but then go out to experience what the world has to offer,” Sotomayor said.

Sotomoyor’s enthusiastic audience gave her two standing ovations in Woolsey Hall. During her visit to campus, she also took part in a conversation with Linda Greenhouse  LAW ’78 at Yale Law School.