More than 600 Yale School of Management (SOM) alumni, friends, faculty, and donors turned out on Jan. 9 to celebrate the opening of its new home, Edward P. Evans Hall, a 242,000-square-foot, glistening glass-and-steel structure located at 165 Whitney Ave. in New Haven.

“The building is a symbol of SOM’s advancement and expanding global influence, as well as our integration with Yale,” said Snyder.

Members of the Yale community are invited to an open house on Friday, Jan. 24 from 3 to 5 p.m. Guests are welcome to take a tour of the new School of Management or explore the space on their own.

Designed by Foster + Partners, which is chaired by Lord Norman Foster ’62 M.Arch., Evans Hall was hailed as the newest of Yale’s architectural landmarks by many on hand. The building, which sits on 4.25 acres, supports an expanded M.B.A. class, increased faculty, and executive education programming.

“This facility will unite the SOM community and create a great and inspiring place for further excellence in the Yale School of Management,” said Salovey.

“In a very interesting transformation, the building dissolves all those sites into one that is more than twice the original size,” said Foster.

Filled with natural light and surrounding a large courtyard, Evans Hall was designed to provide a sense of interconnectedness. “It offers long lines of sight and encourages vibrant engagement,” said Snyder. “We wanted to maximize interchange and collaboration, hallmarks of the school’s integrated approach to M.B.A. education.”

Key features of the new building include the 350-seat Zhang auditorium; the Ross Library; 16 state-of-the-art classrooms; a dining commons and coffee shop; offices for approximately 120 faculty and 195 staff; academic centers; and student and meeting spaces. The new hall also boasts a broadcast studio, small gymnasium, and parking garage. In addition, the Beinecke Terrace Room, a lecture hall and entertainment space with an outdoor terrace, provides views of landscaped gardens in the rear of the campus.

All classrooms are fitted with state-of-the-art technology; two are equipped for simultaneous in-room translation. In addition, Evans Hall incorporates a number of sustainability features, such as solar shading and displacement ventilation. The building — which comprises 4 million pounds of steel, 16.2 million pounds of concrete, and 2.25 million pounds of glass for the exterior façade — is being evaluated for LEED Gold certification.

Evans Hall also integrates modern and contemporary art into its design, including a site-specific piece by Swiss artist Adrian Schiess in the Bekenstein Atrium. The installation includes 90 panels that appear to change color as visitors move throughout the space. On view in the Donaldson Dean’s Suite is a work by Amy Pryor ’01 M.F.A. — titled “And Much, Much More!” — which blends cultural history and economic data into a timeline covering 1980–2010. Works by Yale School of Art students will hang in the Wyper Family Gallery.

Of special note are three wall drawings by Hartford native Sol LeWitt in the Beinecke Terrace Room, the Ellis-Lorimer Commons, and the Ligon-Lamsam Student Commons. Marked by vivid colors and sharp lines, the drawings were applied directly to the walls following the artist’s specifications. John Hogan from the Yale University Art Gallery, which owns several works by LeWitt and houses the artist’s wall-drawing archive, oversaw the installation. 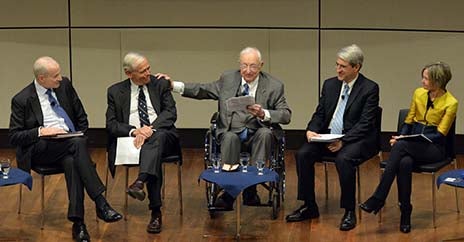 “Yale is unique in the way you get cross-fertilization between the different disciplines,” said Foster, “It was a very enlightened move to incorporate works of art.”

Yale’s School of Management, founded in 1976, aspires to be the first global business school in the United States. Its full-time M.B.A. program boasts the highest percentage of joint degree students of any peer business school, and it has launched major initiatives on healthcare, asset management, and sustainability. In 2012, SOM convened the Global Network for Advanced Management, an association of business schools from developed and developing economies that act together to advance understanding of global business. The school also introduced a Master of Advanced Management program for those who have earned or are earning an M.B.A. (or equivalent degree) from a Global Network school. In addition SOM and other Global Network schools will offer 10 small network online courses (SNOCs) this year for select groups of M.B.A.s.

“The building is the essence of its philosophy and is creating this vibrant community within a larger global community. More than anything, any work of architecture is a story of collaboration,” said Foster.

Evans Hall is named in recognition of a gift from the late Edward P. (Ned) Evans ’64 B.A., former chair and CEO of publishing house Macmillan Inc. The total cost of the project was $243 million, including construction, design fees, furnishings and technology, testing, and surveys, as well as services provided by other Yale departments. Out of 1,400 donors who contributed to the project, 1,300 of them were SOM alumni.

The opening celebration also launched a three-day conference, “Business + Society: Leadership in an Increasingly Complex World,” which took place at Evans Hall Jan. 9–11. Kicking off the event was a panel discussion about the building’s infrastructure, from courtyard to city square, featuring Foster; Yale president emeritus Rick Levin; Karen Van Lengen, former dean and the Kenan Professor of Architecture at the University of Virginia; and Robert A.M. Stern, dean of the Yale School of Architecture.

“Evans Hall is very much a Yale building,” said Stern, citing the quadrangle at the heart of the design and its bold scale. “It’s magnificently well designed to meet the needs of teaching today and satisfy the demands of faculty.”

Speakers also noted that the building’s design allows for change as the needs of the school evolve. “It’s not a glove, but a loose mitten,” said Stern. Foster added that entire sections can be removed or altered and “the building doesn’t fall down.”

For those in attendance at the opening of Evans Hall, the future of SOM appears to be in good hands. “I’ve no doubt that Dean Snyder and President Salovey will take this splendid school to even greater heights,” said Beinecke. “Not only in this country, but in the wider world.”

The construction of Edward P. Evans Hall, new home of the Yale School of Management — a nearly two-and-a-half-year effort — unfold in less than two and a half minutes.