Spotlight: For Yale Professor Scott Strobel, every bowl has a story

If a tree falls (or is cut down) on the Yale campus, Scott Strobel is likely to know about it.

And if he’s lucky, he’ll also acquire all or a big chunk of it.

Strobel, the Henry Ford II Professor of Molecular Biophysics and Biochemistry (MB&B), spends his days overseeing the expansion of Yale’s West Campus as the vice president of planning and development there. Each spring, he also teaches the MB&B course “The Rainforest Expedition and Laboratory,” in which he takes his students on an excursion to Ecuador so they can experience scientific exploration. But on most Saturdays, Strobel dons a green apron and a protective visor, and spends hours in his Hamden garage, where by day’s end he’s usually covered — head to foot — in sawdust.

Most of that sawdust comes from fallen or cut-down trees on the campus, which Strobel uses to hand-turn wooden bowls, pens, and occasionally other objects as part of a small business — appropriately named Yale Bowls — that he has operated for several years.

For Strobel, woodworking is a hobby that allows him a measure of creativity and labor not unlike that which he employs in a science laboratory. As a graduate student and in his early years as a professor, he used to spend a lot of time “at the bench,” he says, but now his administrative responsibilities leave him less time for research.

“[Wood turning] is an opportunity to do something with my hands,” says Strobel. “It’s tactile and an expressive outlet. I spend a couple of hours getting really dirty and making a mess. And at the end of the day I can point to something I made.”

Strobel took the time to talk about Yale Bowls and to demonstrate his craft. Here is what we learned.

No more room: Strobel first began working with wood in 2005, making furniture for his home. He acquired a table saw and other tools for the project, and used his garage as his workshop.

“I wanted at some point to learn how to turn, so I bought a lathe,” he comments. “I started to buy wood, which is ridiculously expensive and not that interesting. One day, I was walking down Hillhouse Avenue and saw a cut-down beech tree in front of the [Office of] Admissions building. I got that wood and thought it would be fun to work with.”

Strobel also managed to get the wood from a walnut tree that had to be cut down at Marsh Botanical Garden, which he hoped to mill himself and use to craft furniture. He spent every weekend for about a month milling with help from Marsh Botanical Garden manager Eric Larson. The experience, he says, taught him that milling his own wood was both time-consuming and laborious.

Just for fun, the Yale professor instead used some of the beech wood to make a bowl. When finished, he showed it to his wife, Lynnette, saying, “Look, I’ve got a Yale Bowl.” The two laughed at the pun.

Strobel enjoyed the process of crafting bowls so much that he continued to make them, filling table space in his own home with his new creations. Eventually, he says, there was no more room.

Testing it out: After gaining permission from Yale Trademark Licensing to use the university’s name for his enterprise, Strobel set up a website with the intent of seeing whether there would be any customer interest in his wooden creations.

“I had always wondered what it would be like to start up a little business,” he says. “I started posting stuff online in August 2010. Nothing happened for a couple of weeks, and then somebody bought a pen. Later, someone in Europe liked my website on Facebook.”

From there, his business took off, and his Yale Bowls and pens are now owned by presidents of countries, international diplomats, Yale staff members, alumni, and others.

Every bowl has a story:  Among those who own a Yale bowl is actor Paul Giamatti, son of former Yale president A. Bartlett Giamatti and the star of last season’s “Hamlet” at the Yale Repertory Theatre. While in New Haven, the actor narrated on video a history of the New Haven Green for the New Haven Museum, and the museum wanted to present him one of Strobel’s bowls in thanks.

Strobel says he found the perfect bowl for Giamatti, one made from the historic “Lincoln oak” on the New Haven Green that was toppled during Hurricane Sandy last year. The oak was planted on the Green in 1908 to commemorate the 100th anniversary of Lincoln’s birth, and when it fell, it also unearthed skeletal remains buried during the colonial period. Strobel later acquired the massive tree from New Haven’s Parks & Recreation Department.

“In ‘Hamlet,’ there is a moment where Hamlet, played by Giamatti, steps into a grave and pulls out a skull, and then has a conversation with a jester’s skeletal remains,” says Strobel. “So the bowl from the Lincoln oak was perfect.”

A piece of history: Each of Strobel’s creations comes with an accompanying certificate describing the history and age of the tree from which it was made. Many of those trees have an almost mythical meaning for Yalies, he notes. Among the trees he has acquired are part of a gingko from the Timothy Dwight College courtyard that came down during Hurricane Sandy and that has long been an iconic symbol for residents of that college; a sycamore that stood for about 150 years in front of Mory’s; and a beech tree that was planted while just a sapling when Ezra Stiles College was erected, and was cut down during the renovation of that college in 2011. Strobel also makes bowls and pens using the wood from the bleachers that were removed from the historic Yale Bowl during that facility’s renovation.

All of Strobel’s bowls are initialed and numbered relative to the total number of bowls produced from that wood source. On some of his creations, Strobel leaves part of the bark of the tree on the bowl’s edge. 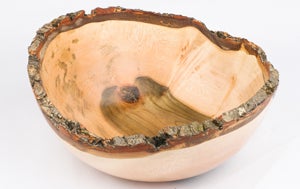 “If you carve into a beech tree, that carving lasts forever,” says Strobel. “So on some of my bowls, you might see someone’s initials, or the marks left by nails or staples. You’re really getting a piece of a Yale history, a connection to the campus.”

Yale’s Grounds Maintenance crew usually notifies Strobel when it has a cut or fallen tree for him to salvage, which he loads into a small pickup he calls “the dump truck.” He’s been seen on the campus in all kinds of weather gathering the remains of fallen trees, even on the day after the hurricane, when he ventured out with his truck hoping to gather the remnants of a large oak that was toppled on Grove Street. (Most of it had been carted off by city workers by the time he arrived.)

A mystery call: One of Strobel’s favorite stories about his woodworking venture begins the week of July 4th, when he received a phone call from the Yale President’s office, asking if he had a bowl made from a tree from either Jonathan Edwards (JE) or Silliman colleges. It had to be a big bowl, and one that was unique, he was told, but no mention was made of its recipient. Strobel had a bowl he made from a tree that grew across from Silliman College. It wasn’t until he received a follow-up call telling him what message should be engraved on the bowl that Strobel learned the bowl’s destination: It was to be a gift from the U.S. Secretary of State and Yale alumnus John Kerry ‘66 to his counterpart in China.

“Once the White House Office of Protocol got the bowl, they ordered 10 more so that Kerry could present them as gifts,” says Strobel.  “Who knows what desks and offices they are found on now.”

Perfected with time: Making a bowl from start to finish is about a year-long process for Strobel. After making a rough cut of the bowl on the lathe, he puts it in his shed to dry, which takes anywhere from six months to a year. Once the wood is stable, he does finer hand-turning on the lathe and then places a finish on the piece. He has also made cutting boards, lidded boxes, and plates. Prices for his pieces range from $100 to just under $400.

His favorite wood to work with is walnut, which “smells rich,” Strobel says. “It’s a really beautiful wood, easy to cut with great color and figure.”

Sharing the joy of his making: Strobel has given some of his own creations as gifts to colleagues and friends, including President Peter Salovey and former Yale College dean (now Duke University president) Richard Brodhead.

“I turned two bowls that were nested, one inside the other, and ended up giving one to each of the former deans,” says Strobel. “They were made from an oak that was in front of the dean’s house on Prospect Street that came down as part of a remodeling project on that street.”

Strobel says he is thrilled with the way his own passion for his hobby has managed to bring some pleasure to others.

“I’ve got some appreciative customers, and my wife is happy not to have so many bowls sitting inside the house,” he says.

Asked if he’s concerned that he’ll run out of wood from Yale trees, he grins. “I did worry about that when I first started,” he says. “Now I’ve seen just how much can be done with some of the wood I’ve already collected, and sadly — or happily — there will always be trees coming down.”