Pulitzer Prize-winning journalist Seymour Hersh gave a scathing assessment of U.S. foreign policy in the Middle East under Presidents George W. Bush and Barack Obama in a Nov. 12 campus talk, during which he discussed secret military initiatives, the subversion of the U.S. Constitution, the funneling of money into offshore banking accounts to fund special military operations, and a mainstream media currently uninterested in publishing anything that is critical of the president. 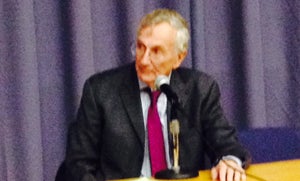 Hersh, known for exposing the My Lai massacre in Vietnam and the abuse of prisoners in Abu Ghraib, took part in a conversation in Luce Hall with Sterling Professor of English David Bromwich, and later answered questions from his audience. His visit was co-sponsored by the Department of Political Science, the MacMillan Center and the Poynter Fellowship in Journalism.

In his talk, “The Obama/Bush/Cheney/Saudi Foreign Policy,” Hersh accused Obama of being on the wrong side in the Syrian conflict, saying that Syrian president Bashar al-Assad is “preferable’ over anyone else to lead the country, despite his record on corruption and human rights.

“I don’t know why we don’t just accept what the reality is: Bashar is going to win, period,” predicted Hersh about the civil war in that country.

He also decried U.S. policy toward Iran, emphatically maintaining that there is no chance that Iran is anywhere close to achieving nuclear weapons, despite reports to the contrary by some journalists and by government officials.

“We’ve been in and out of that country. … We know they have no facility for fabricating a warhead,” maintained Hersh.

Hersh said another of Obama’s failures was to not shut down Guantanamo, as he had promised two days after taking office.

“I think it was a huge mistake, not coming in with force right away, not closing it,” Hersh said. The journalist also shared his opinion that “if [Guantanamo detainees] were not al-Qaeda when they got there, they were by the time they got out.”

He criticized Obama’s handling of national health care, saying, “He had without question the best computer operation in the election, and yet he can’t get Obamacare off the ground! I know he’s not responsible for everything, but I don’t understand it. … He’s a hidden man; he’s hard to get to in the sense that I just don’t know where he is.”

Hersh, whose numerous books include one highly critical of President John F. Kennedy, cited Obama, Kennedy, and Lincoln as among the most intelligent U.S. presidents, and said that Obama has a presence not unlike that of Kennedy.

“There’s this love-fest going on with Obama,” Hersh asserted. “The mainstream press makes it hard to publish stories critical of Obama. … Editors come back swooning [after meeting him].”

Hersh began the conversation talking at length about former vice president Dick Cheney, whose agenda, he said, was “to change the paradigm of the U.S. Constitution” by raising money “off the books” so as to bypass Congress in running secret military operations.

“The whole story of Bush/Cheney is about how a group of neo-conservatives overthrew the Constitution and how easy it was,” Hersh maintained.

Asked by Bromwich what Cheney’s vision of the U.S. role in the Middle East might be, Hersh said that the former vice president spoke of building a “necklace” around Russia by making allies with neighborhoing countries. Hersh added that he believed that the 9-11 terrorist attack — and a fear of chemical weapons — “really shook [Cheney] up.” Furthermore, stated Hersh, “Cheney’s whole idea, I do believe, had a lot to do with oil. He wanted to keep the oil flowing. That was a big drive for him: to keep oil in the hands of Western corporations.”

Hersh began his reporting career in 1961 and has written for The New York Times, The New Yorker, and other publications. He is the author of books about My Lai, Henry Kissinger, Kennedy, and the war on terror, among other topics. In all of the years of his reporting — which has included covering international and civil wars, crimes, Watergate, and more — Hersh says he has never met anyone who admitted to wrongdoing.

“Cheney is convinced what he did is right,” said Hersh.

In his talk, Hersh summed up much of what he learned about secret and questionable tactics in the American government by saying, “It’s like a nightmare.”

He said he has much to divulge in an upcoming book about U.S. policies in the Middle East.