Yale senior Jen Kramer leads a pretty magical life. She’s also more than willing to bring some impromptu magic into the lives of anyone she meets — and always keeps a deck of cards with her for just that purpose.

Considered one of the most skilled young magicians in the United States, Kramer says she can’t imagine her own life — or the world itself — without magic.

“Magic is a unique medium for connecting people to that sense of wonder and mystery we all had as children — and that constant questioning kids do,” she says. “There’s something beautiful about having those things in our lives.”

Kramer brought some magic to Yale as the founder — in her freshman year — of the Yale Magic Society. As its president, she collaborates with fellow Yale magicians, introduces novices to the craft, and performs on campus and in the wider community.

Kramer recently spoke with YaleNews about her love of magic and demonstrated some of her tricks (see video, above). Here is what we learned.

A double-digit beginning: For her 10th birthday, Kramer received a beginner’s guide called “The Royal Road to Card Magic” as a gift from her Uncle Steve, an amateur magician. The book, which remains one of her most prized possessions, immediately hooked her, Kramer says. She began learning some of the tricks, and became so enthralled with the craft that she spent a couple of summers at Tannen’s Magic Camp, an overnight camp held at Bryn Mawr College for young magicians-in-the-making. She distinguished herself at the camp by winning first place in a junior-level competition.

“I started out mostly doing card magic,” Kramer recalls. “Then when I was about 11 or 12, I joined the Society of Young Magicians (SYM) Assembly #69 in Manhattan, led by Albert Lasher. Albert is a wonderful mentor, and it was a great opportunity for me to meet other young magicians. We’d perform, critique each other, and share our latest ideas.” 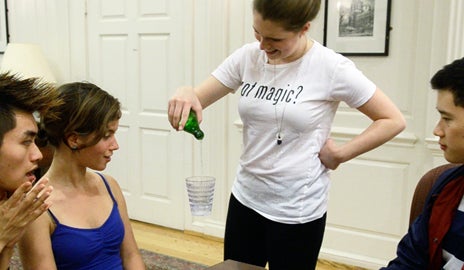 Healing magic: In high school, Kramer established a rehabilitation program focused on magic for patients at Mount Sinai Hospital in New York City, and performed with other SYM members on the hospital’s closed-circuit television station. She also produced “Magic: A Cure is in the Cards,” a benefit for the American Cancer Society, and performed magic shows while volunteering at a soup kitchen and at events such as benefit walkathons.

Connecting through stories: Magic has taken on greater meaning in her life since her earliest practice of it, says Kramer.

“When I started in magic, I thought of it as something cool and fun,” says Kramer. “It was exciting to be able to do things that even grownups couldn’t do, and to learn these magical secrets that have been passed down from magician to magician. But as I continued to perform, I discovered the value of magic as a vehicle to connect with people.

“There’s this great quote by S.H. Sharpe, an author of books on magic theory. He says: ‘Wonder is the key to the cosmos and magic fabricates that key.’ That speaks to how I feel: Magic creates wonder. And wonder is universal, so magic is universal,” the Yale student adds.

Whether she is turning a $1 bill into $20s, sawing a man in thirds, divining the thoughts of a spectator, making small bulbs of light pop out of her ears, or doing card tricks, Kramer believes her magic is really about telling stories.

“As much as I love the sleight-of-hand, magic is at its core about storytelling, and the sleights are a means to that end,” she says. “It’s the storytelling that brings people together, and that’s the point of magic — establishing this genuine, human connection.”

Crowds have been so enthused by her performances that Kramer has been featured on national television programs such as Fox News’ “Fox & Friends,” among others. She is now a member of the Society of American Magicians and the International Brotherhood of Magicians, and has taught and performed magic with Tom and Janet Verner through their non-profit Magicians Without Borders.

Magical enrichment: A theater studies major at Yale, Kramer is currently working on her senior thesis project: an experimental “floating” magic show, a site-specific performance at locations around the campus that brings its audience on a journey.

“I’m interested in working outside of the traditional theater venue and in creating opportunities that are yet unexplored,” she says.

Kramer has held various internships to advance her work in magic, ranging from working at Fantasma Magic, one of the world’s biggest distributors of magic supplies, to spending two summers working for the Nathan Burton Comedy Magic Show at the Flamingo in Las Vegas. While interning at the latter venue, she was unexpectedly invited to perform as a fill-in showgirl.

“I had never worn red lipstick before and was outfitted in a pink sparkly bikini, and had to quickly learn the choreography,” says Kramer. “I agreed to do it, thinking it would be a one-time event, but ended up doing about 20 shows over three weeks. We had a lot of fun.”

She admits that she welcomes such unexpected opportunities in life, as well as the incongruity of being both a self-proclaimed “magic nerd” who reads “hours and hours of magic theory” and a Las Vegas showgirl.

“I hope to be someone who is full of surprises, full of seeming contradictions,” Kramer explains. “That’s like magic!”

Earning notice: Asked if she has a favorite magician, Kramer gushes appreciation for her first mentor, Lasher, and her Uncle Steve, as well as some of the most popular practitioners of her craft, including David Blaine, Criss Angel, David Copperfield, and Nathan Burton.

“I’ve been so lucky to have met these magicians and role models,” says Kramer, whom Blaine has described as “[o]ne of the most talented and most promising young magicians anywhere.”

Kramer also has a black belt in Shotokan karate, and has competed on the Yale Ballroom Dance and Yale Alpine Ski teams. She is currently a reporter for YTV, the Yale Daily News’ official online television broadcast.

“I believe strongly in the power of television. And journalism — like magic — is, at its core, about storytelling,” the Yale senior says.

Keeping some magic to herself: After she graduates, Kramer hopes that she is able to make new contributions to the field of magic as she performs. She also hopes to inspire more young women to participate in the traditionally male-dominated craft, and aspires to perform internationally in different languages. She speaks French, Spanish, and Swahili.

While Kramer’s earliest magic performances were designed for close-up viewing by just a few people, she now often performs “parlor magic” for larger crowds. A word of warning, though, for those in her audience: Don’t ask her to reveal her magical secrets — unless you are seriously interested in performing magic yourself.

“There’s a magician named Josh Jay, a really innovative guy, who wrote in one of his books that the key to sharing magical secrets comes down to effort. I completely agree with that,” Kramer comments. “If a person is dedicated enough to the craft to sit down and study a magic book, then we should help this person out however we can. But if someone’s just curious about the secrets, that’s a different story!”

A place magically filled: Kramer was excited to be one of the featured performers during President Peter Salovey’s inauguration festivities during the campus-wide open house on Oct. 12, at which she entertained audiences on Cross Campus and on High Street.