Town hall will explore the issue of climate change

Connecticut Senator Chris Murphy will join in a discussion about climate change with Yale faculty members and experts on climate and infrastructure 2-4 p.m. on Friday, Sept. 13 in Burke Auditorium of Kroon Hall, 195 Prospect St.
Share this with Facebook Share this with Twitter Share this with LinkedIn Share this with Email Print this 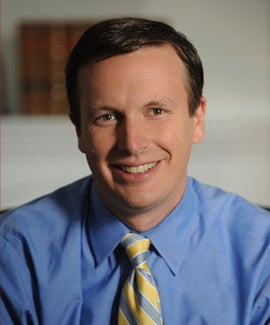 U.S. Senator Chris Murphy (D-CT) will join in a discussion about climate change with Yale faculty members and experts on climate and infrastructure 2-4 p.m. on Friday, Sept. 13 in Burke Auditorium of Kroon Hall, 195 Prospect St.

Global climate models predict that the northeastern United States will be particularly vulnerable to short- and long-term effects of global warming. A 2011 report by the American Security Project estimated that failure to mitigate or plan for the expected higher-than-average temperatures and sea level, more frequent storms and droughts, as well as other changes, could result in the loss of 100,000 jobs and $22 billion from the regional economy between 2010 and 2050.

The panel will discuss these concerns and others. In addition to Murphy, panelists include Kerry Emanuel of the Department of Earth, Atmospheric, and Planetary Sciences at the Massachusetts Institute of Technology; Alexander Felson, director of the Urban Ecology and Design Laboratory of the School of Forestry & Environmental Studies and the Yale School of Architecture; Marion McFadden, acting executive director of the Hurricane Sandy Task Force; Katie Scharf Dykes of the Connecticut Department of Energy & Environmental Protection; and Professor Ronald Smith of the Center for Earth Observation in Yale’s Department of Geology and Geophysics.

The event is hosted by the Yale Climate & Energy Institute and is free and open to the public.