Cooking to win, and they earn top medals 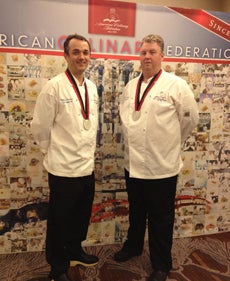 Yale Catering executive chef Dave Kuzma and third cook Cyril Ortigosa-Liaz brought home a silver medal prize at the national championship of the Collegiate Dining Challenge, which was co-sponsored by the National Association of College and University Food Services (NACUFS).

Yale’s two-person team was selected from a range of universities as one of six teams to take part. Kuzma and Ortigosa-Liaz designed a three-course menu, which featured seared salmon filet with English pea purée and Bay beets; mushroom-stuffed breast of chicken with summer vegetables and caponata; and tres leches at Yale.

The dishes were prepared under the watchful eyes of four ACF-certified judges within two-and-a-half-hours. 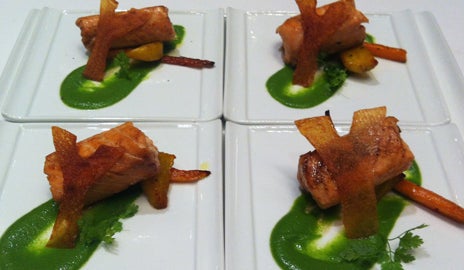 Additionally, Ortigosa-Liaz received a national gold medal honor for “Flavors of the Mediterranean — A Riviana Rice Competition,” for his rice-based creation — stuffed breast of chicken with farrosotto.

ACF is a culinary federation of professional chefs and cooks founded in 1929. It has approximately 20,000 members from across the spectrum of culinary establishments.

This award — along with recent awards from NACUFS — recognizes Yale Dining for the care and quality of the overall operation, as well as the creative innovation of the culinary offerings.

“These achievements are a testament to Yale Dining’s commitment to excellence in hospitality,” says DeSantis. “Yale Dining’s team members are committed to providing innovative approaches to food and service so that our students have a memorable dining experience everyday.”