If you’ve attended the Yale College Freshmen Holiday Dinner, you probably have fond memories of such delights.

The annual feast has become part of the Yale College tradition — bringing joy to each freshman class for over 60 years. Such an event requires the masterful planning and attention to detail from many on the Yale Dining staff.

And now, their work has been recognized with a national prize.

The National Association of College and University Food Services (NACUFS), an organization of peer institutions, honored Yale with the Grand Prize award for a special event at the Loyal E. Horton Dining Awards on July 15 at its national conference. Yale, which previously won the special event award competing against universities of similar size in May, edged out the overall field of over 200 other institutions, regardless of size, to take home the top honor.

Among the criteria NACUFS judges considered were: innovation in event concept; creativity and style of the menu; the color, texture, and flavor of menu items; the creativity and attractiveness of food presentation; room design and atmosphere; and artful and creative “flair” of marketing materials. NACUFS also considered what it called “an overall ‘wow’ factor in the event.”

In the book, student testimonials expressed gratitude for and delight with the event, describing it with words such as “magical” and “amazing.”

“We hear from students all the time, who say this event is one of their favorite memories throughout their Yale College experience,” says executive director Rafi Taherian. “The National Association of Colleges and University’s Horton Award Committee echoed the students’ enthusiasm, too.” 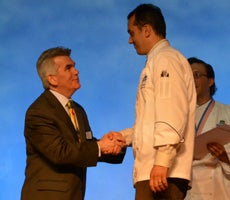 Director of residential dining Cathy Van Dyke, who accepted the award on behalf of Yale at the conference, could not agree more: “The Holiday dinner has such a long tradition. Every year it’s a tremendous effort and source of pride for all the staff at Yale Dining. To receive national recognition from fellow dining professionals for their work makes this extra special.”

For weeks in November and December, the staff at Commons diligently plans and meticulously prepares the makings of an evening of epicurean delights and pageantry. In the essay describing the dinner, the evening is described as “one of the most memorable dining experiences for Yale undergraduates  — an evening that celebrates the holiday season, the artistry of food, and the community among students, administration, and dining staff.”

Decorating the dining halls begins right after the Thanksgiving break. In the three days leading up to the dinner, the Bake Shop prepares cakes, desserts, loaves of stolen and panetone breads, as well as an eight-foot-long challah bread which requires assembly over several table tops. Candy makers decorate life-size gingerbread houses with their confectionary creations.

The evening’s festivities open with a fife and drum corps ushering in the Parade of Comestibles, a presentation of 12 various culinary offerings brought from the kitchen by staff at Commons. For the whole evening to run smoothly, approximately 50 dining staff members work through the evening  — including two volunteers as Santa and Mrs. Claus.

In its preparations, Yale Dining also takes extra care to be as sustainable as possible. Practices such as sourcing food locally, composting, limiting use of linens, and discontinuing the use of trays helped to increase the NACUFS score.

In addition to the Grand Prize honor, Yale Dining chef Cyril Ortigosa-Liaz won a Gold Medal for the Northeast Region at the NACUFS conference’s “Culinary Challenge,” a live audience competition of food preparation and presentation skills in collegiate dining services. For his entry, Ortigosa-Liaz prepared tellecherry pepper duck breast with kiln-dried cherries & garden vegetables, and he edged out other competitors from schools including Cornell, Brown, Tufts, and Harvard.

Taherian credits the diligence and dedication of his team for making the new honor possible, saying, “It was a fierce competition and the Commons team made us all proud!”

See images from the 2012 Holiday Dinner.