Most of all, be kind, Newark Mayor Cory Booker tells seniors at Class Day

In his address to members of the Class of 2013, Newark Mayor Cory Booker told the graduating seniors that nothing they do will be more important than engaging in small acts of kindness and in giving their sincere attention to others.

At Class Day exercises on the Old Campus, Booker, who earned his J.D. degree from Yale Law School in 1997, recounted a dark time in his own life when that lesson was brought home for him.

Before he had become mayor, he told the seniors and their guests, he had taken under his wing some youngsters who gathered in the lobby of his high-rise apartment building in Newark. Fearing that without guidance they would fall prey to drugs and gangs, he spent time talking to them, taking them to the movies, and introducing them to other friends who could help serve as mentors.

During his campaign for mayor and in his first months on the job, however, he was too busy to stay involved with his young friends. As mayor, Booker said, he was intensely engaged trying to stem the high crime rate in the city, and found himself at nearly every crime scene speaking about how Newark could do better.

At one murder scene, Booker told his audience, he was so entrenched with his crime-fighting preaching that he barely noticed the young man who was lying dead on the sidewalk. Later that night, while reviewing the events of the day, he saw the victim’s name on his Blackberry phone.

The young murdered man was one of the youths he had befriended in his lobby, a “smart and charismatic” youngster who reminded Booker of his own father.

At the youth’s heavily attended funeral, Booker was so overcome with a sense of shame that he avoided contact with the other attendees, instead heading alone to his office. There, he recalled, he sat down and wept.

He told the soon-to-be graduates that they, too, will have moments in life when they are overcome with a sense of shame, or of failure, and that heeding the lessons of such times will build their character.

“I promise you, you will have mornings where you wake up and feel this weight of shame weighing you down in your bed so you don’t want to get up,” Booker said. “I tell you, you will have days like this, where [you will feel] fear, or pain, or sorrow, or even the stinking malaise of depression — where you can’t even find your enthusiasms. And I’ve come to realize that in life, real courage is not giving a speech or running into a burning building … Real courage is holding on to a still voice in your head that says ‘I must keep going.’ It’s that voice that says nothing is a failure if it is not final — that voice that says to you: ‘Get out of bed. Keep going. I will not quit. I will not give up no matter how dark the days, no matter how big my failure. I won’t lose lessons that I could gather while on my knees. I won’t lose the lessons I can find in my lowest pits of despair, because when I emerge, it’s those lessons that will define my being.’”

Booker told the seniors that often those small acts are “the least glamorous things,” such as helping a child improve his or her reading, or helping someone fill out an application for food stamps.

Booker said his story about his moment of darkness was told in the tradition of his mother and grandmother — that is, an accurate and truthful account. He also shared a story that, he noted, was in the storytelling tradition of the patriarchs in his family — that is, an exaggerated truth.

In that story, he told of how he had just 15 minutes to make a flight from Newark to San Francisco, and that everyone he encountered along the way told him it was impossible. He described near-heroic sprints in the airport, where he said he pleaded with those who stood in his way, sharing his mother’s adage: “Ain’t no such thing as impossible.” Booker said he not only managed to get on the flight, but found himself in a first-class seat for the first time in his life. Pleased with himself and his new “first-class” status, he suddenly heard the pilot announce that the flight was headed to Miami.

There was a lesson for the seniors in that story, too, commented Booker.

He told his audience that he met some of the most first-class people he has known in such places as Newark housing projects and drug treatment centers.

Booker said one of his own mentors was Newark community organizer Frank Hutchins, who lost his eyesight at the end of his life. Nevertheless, whenever Booker visited him and announced himself, Hutchins would remark, “I know, Cory Booker, I see you.”

Booker concluded his speech repeating those words to the graduating seniors: “Class of 2013, I see you.”

“I see that you are stronger than you know, have more beauty than you realize, and are more powerful than you can imagine,” he continued. “But you must imagine it.

He said he hoped that when the soon-to-be graduates listen to the national anthem, they would do as he does, each time hearing anew the words “Oh say, can you see?”

A light rain fell during most of the Class Day exercises, which also included the awarding of prizes to students who excelled in academics, athletics, and in other areas. (See story about the prizewinners.)

In her Class Reflection, Julia Pucci urged her classmates not to be complacent, but to “know their environment, not just live in it.” In another Class Reflection, Jacob Evelyn noted that “Yalies are not afraid to do what they love,” and urged his classmates: “Keep exploring, keep dreaming, keep running naked through local libraries. Keep being excited because the real world is about to get rocked by you.” 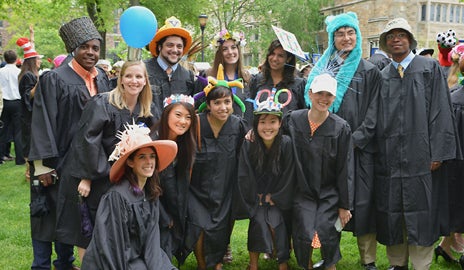 Baobao Chang read this year’s Ivy Ode, which she wrote for the occasion. Titled “March on Prospect Street,” it read, in part: “In March, our boots still dripped/old water freezing, melting, then, again./Just let these boots march us to twenty-five,/to New York, wedding, wedding, and midlife,/to hearth-and-home-and-SUV, you joked./I did not think you joked. Not when we will/soon climb this hill for the last time in May,/when the gardens of Prospect Street weep weep/petals to rail against the season’s end./But I will this sidewalk, this road, to grow/past little houses, the river, its trees — every patterned line of topography./Then you and I will spring into the lightness/of unmapped white, in search of newer truths.”

A newer tradition — a “class history” illustrated in video — told of a campus haunted by Jeremiah Dummer, who lost out to Elihu Yale in having the university named after him. According to the video, the dark-hearted Dummer makes his presence known in classes graduating in a 13th year, and nearly every student becomes suspect as a Dummer follower. A witchhunt for Dummers ensued in a plot that featured Yale administrators and students in starring roles, many comedic, eliciting laughter and cheers from students as they watched familiar personalities take on their film personas.

The graduating seniors — clad in creative headgear of all kinds in keeping with a long Yale Class Day tradition — ended one of their final celebratory gatherings with the waving of white handkerchiefs as they sang “Bright College Years,” performed by members of the Yale Band. Rain began to fall more steadily at the close of the ceremony, but many of the students were in no hurry to part from each other as they posed happily for classmates, friends, and family members for some of their final pictures on the campus.