After she graduates in May, Yale senior Madison Sharp will focus some attention on a problem that became an ardent interest in her final year: the high incidence of chronic kidney disease (CKD) among sugarcane workers in Nicaragua.
By Susan Gonzalez
Share this with Facebook Share this with Twitter Share this with LinkedIn Share this with Email Print this

After she graduates in May, Yale senior Madison Sharp will focus some attention on a problem that became an ardent interest in her final year: the high incidence of chronic kidney disease (CKD) among sugarcane workers in Nicaragua.

That problem is the topic of her senior thesis for her environmental studies major, and is one she also explored while on a community service trip to Nicaragua over spring break.

Sharp recently spoke with YaleNews about her concern about the health of Nicaraguan sugarcane workers. Here is what we learned.

From talk to analysis: Sharp heard about the prevalence of CKD among sugarcane workers in Nicaragua during a fall-semester conversation with Martha Dale, director for the Global Health Leadership Institute’s China programs. Dale told Sharp that there were a number of faculty members and students at Yale who aim to raise awareness of the issue as well as promote interdisciplinary research on and advocacy for the workers’ health. She also hoped to interest undergraduate students in that cause.

“The more I learned about the problem, the more drawn to it I became, not only from a public health standpoint but as a human rights issue as well,” says Sharp, noting that students at Yale Law School and the School of Forestry & Environmental Studies first brought the issue to wider attention nearly a decade ago when they filed a complaint with the Center for Environmental Law on behalf of sugarcane workers. Their action resulted in the appointment of an ombudsperson to facilitate dialogue between the workers and their employer, the Nicaragua Sugar Estates Limited (NSEL), about the problem, and launched an ongoing investigation by researchers at Boston University into the causes of CKD among the workers.

One cause, or many? More than 2,000 Nicaraguan sugarcane workers have been diagnosed with CKD, and “no one knows for sure what is causing the epidemic, although it is clear the etiology is multi-factorial,” says Sharp.

“Originally it was thought that the pesticides the workers have been exposed to cause kidney injury,” she adds. “But other factors — such as dehydration, heavy labor, sun exposure, and possibly genetics — are also being examined.”

In Nicaragua, CKD is particularly common among young male sugar workers, Sharp learned. The unskilled, subcontracted workers are paid based on how much sugar they cut, about 90 cents for a ton of cane. Workers have reported spending anywhere from two to six more hours toiling in the fields than the eight hours a day the NSEL claims.

“The workers usually don’t take water breaks, because the more they drink, the less sugar they cut,” the Yale student says. “They often lose about five pounds a day, and typically replace the lost fluid with sugary drinks.”

Odds stacked against them: Sharp discovered that workers generally cut sugarcane for about three years before blood tests — performed by the NSEL — reveal high creatinine levels in their blood, revealing kidney injury. The company fires affected employees, who then lose Social Security benefits and pensions. They are eventually diagnosed with full-blown CKD.

Sharp says that the high cost of kidney transplants rules out that option for the Nicaraguan workers with CKD. The only feasible treatment for most of the workers is peritoneal dialysis, which they perform at home.

“There are only 12 nephrologists in the entire country and three sites for dialysis treatment, even though there is a high need for dialysis there,” says Sharp.

Eventually, the sugarcane workers die from CKD, and the women and children the men leave behind end up working in the sugarcane fields in order to support themselves, according to Sharp.

Silencing those who speak: While doing her research, Sharp learned that there are a number of other factors that further complicated the situation for the sugarcane workers, including the close ties between the government and the head of the sugar company, the lack of an agency in Nicaragua to investigate employee health and safety concerns, and the inconclusiveness, so far, of the Boston University research into the causes of CKD among the Nicaraguan workers. 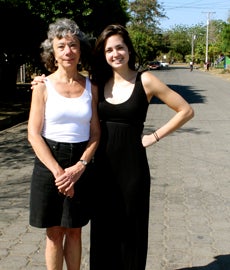 During spring break, Sharp helped lead a trip to Nicaragua with Jean Silk, program manager of the Council on Latin American and Iberian Studies, as part of Reach Out — an undergraduate organization that offers alternative spring break trips with a community service mission. They were joined by nine other Yale student volunteers who, in partnership with the New Haven-León Sister City Project, donated books and read to Nicaraguan children.

While in Nicaragua, Sharp also met with several different organization and advocacy groups to discuss the issues surrounding sugarcane workers in the country.

“I spoke with former workers who have CKD and are no longer able to work, and heard about their plight and their relationship to the company,” says Sharp. In addition, she met with the director of the Nicaraguan Ministry of Health, and attended a sugar cane workers’ rally, which was shut down by police.

“Basically, the workers have no voice in this problem at all and those with CKD lack any real source of income aside from the sugarcane industry,” says Sharp. “Workers are threatened by the company when they speak out and frequently lose their food stipends as a result. So they become silent. That’s one reason why it is a human rights issue as well.”

An education through travel: In addition to being a voice for the workers, Sharp will conduct health research after graduation with the New Haven-León Sister City Project, and then hopes to engage in public health research about CKD at the Boston University School of Public Health. She eventually aspires to go to medical school.

She credits a class she took with professor emeritus Gary Brewer — “Sustainability in Latin America” — with sparking her interest in the region. Brewer is now her senior thesis adviser.

Sharp says she’s grateful for the opportunities she’s had while at Yale for travel and research abroad. In addition to her trip to Nicaragua, the Yale senior has traveled to China, Croatia, Bosnia, and Uganda. Her work in a Ugandan clinic for HIV and tuberculosis patients was made possible by a Yale International Bulldogs Internship.

“I’ve always been interested in global health and love learning about other cultures,” says Sharp. “I’m also drawn to working with people in resource-poor settings and am maybe a bit of an adventurer. I like the idea of being able to provide medical humanitarian aid as a future career.”

Hope for a remedy: The captain of the Yale field hockey team, Sharp has also been involved with REMEDY (an initiative to send recycled medical supplies to underdeveloped countries) and was a sustainability peer educator in Silliman College, among other activities. She spent last summer conducting vector-borne pathogen research at the Yale School of Public Health, and organized and participated in a Tough Mudder campaign to raise funds for myotonic dystrophy research, an ailment suffered by her Yale field hockey teammate Ona McConnell.

Sharp is hoping to interest Yale law students in the plight of the sugarcane workers and joined Dale and Silk in writing a grant proposal to support the hosting of a Yale conference next year to explore the issue of CKD among sugarcane workers.

“These workers are really in a difficult situation and I hope that we can find the cause of their ailment and do something to address it,” says Sharp. “It would be great to have others at Yale join in that cause.”