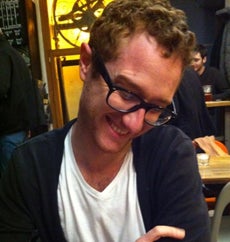 Eryn Green, a doctoral candidate at the University of Denver, has been named the winner of the 2013 Yale Series of Younger Poets competition, awarded by the Yale University Press.

His prize-winning manuscript, “ERUV,” was selected by poet Carl Phillips, who has been the judge of the competition for the last three years.

“ERUV,” says Phillips, “reminds us how essential wilderness is to poetry — a wilderness in terms of how form and language both reinvent and get reinvented; meanwhile, the sensibility behind these poems points to another wilderness, the one that equals thinking about and feeling the world — its hurts, its joys — deeply and unabashedly, as we pass through it.”

Yale University Press will publishing Green’s book in April 2014 as the 108th volume in the Yale Younger Poet series. Phillips’ second selection, Will Schutt’s “Westerly,” will be published by Yale Press next month.

Green holds an M.F.A. from the University of Utah. His work has appeared in Jubilat, Colorado Review, Painted Bride Quarterly, and elsewhere. “ERUV” was also selected as a finalist for the 2011 Omnidawn 1st/2nd Book Prize.

Awarded since 1919 by Yale University Press, the Yale Series of Younger Poets prize celebrates new American poets by bringing the work of these artists to the attention of the larger public. Earlier winners of the prize include Adrienne Rich, John Ashbery, Jack Gilbert, Jean Valentine, and Robert Hass. It is the longest-running poetry prize in the United States.

The Yale Press will also continue its partnership with the James Merrill House. Winners of the series will receive one of the five writing fellowships offered at the James Merrill House in Stonington, Connecticut. The fellowship provides a furnished living space and daily access to the late poet’s apartment for a writer in search of a quiet setting to complete a project of literary or academic merit.

The following is one of the poems in “ERUV,” titled “Page of Swords.”

So take care of yourself, learn how

into your hips, braver please

give love credit for

the way I live

the card I draw

blushing in your breast

freedom I know you