Not having enough free time is a common complaint of college students, but for Yale senior Alyssa Zupon, having spare time makes her “uneasy.”

Just listing her activities and projects makes it obvious that downtime is pretty rare in her schedule. The captain of and forward on the Yale varsity women’s ice hockey team, Zupon is a pre-med student majoring in molecular, cellular, and developmental biology and contributes 20 hours a week to cutting-edge molecular genetics research in the laboratory of Murat Gunel, the Nixdorff-German Professor of Neurosurgery. She co-founded and helps coordinate the Bulldog Pediatric Alliance With Student-Athletes (PAWS) program that pairs pediatric patients at Yale-New Haven Hospital (YNHH) with Yale athletic teams, and also co-founded and helps run the charity Hope for Tomorrow, which provides support to high school students who were affected by the devastating earthquake and tsunami in Japan. In addition, she served for two years on the NCAA Student Athlete Advisory Committee and headed the Community Service Subcommittee. With her hockey teammates, she also participates in a number of annual community service and fundraising events.

For these and other activities, Zupon has been named one of five finalists in the nation for the BNY Mellon Wealth Management Hockey Humanitarian Award, which honors a male or female college hockey player (in Divisions I through III,) who is considered “hockey’s finest citizen.” If she wins the award, it will be the first time that any college has had three honorees; her former teammate Aleca Hughes won the award last year, and Kristin Savard received it in 2007.

Most recently, Zupon was named the Mandi Schwartz Student-Athlete of the Year by the Eastern College Athletic Conference (ECAC), which honors an individual who excels in the classroom, participated in at least 50% of her team’s games, and demonstrates leadership on and off the ice. Formerly known as the ECAC Student-Athlete of the Year Award, it was renamed in honor of Schwartz, Zupon’s former Yale teammate, who died of leukemia in 2011.

Zupon says she doesn’t find it terribly difficult to balance the various facets of her academic, athletic, and community service engagements.

“I’ve always liked discipline and getting things done,” she explains. “Doing all of these things makes me happy. It’s especially easy when you enjoy them.”

Zupon founded Bulldog PAWS with David Gimbel ’03, ’10 M.D., her faculty adviser while he was a medical student, who is now doing his residency in neurosurgery at YNHH. Gimbel recommended that she get in touch with his mentor, Dr. Michael DiLuna ’98, ’03 M.D., assistant professor of neurosurgery and pediatrics, to talk about the possibility of shadowing him. After attending surgeries and watching DiLuna work with patients in a pediatric neurosurgery clinic at YNHH, Zupon says she became “hooked right away” on learning more about the brain and nervous system.

One of DiLuna’s patients is 11-year-old Giana, who was recovering from brain tumor surgery when she was adopted two years ago by the Yale women’s hockey team in what was the first Bulldogs PAWS pairing. The service organization has since expanded to include seven Yale teams, and other teams are waiting to be matched with young patients.

Giana is one of the most ardent supporters of her “big sisters” on the women’s team, and she and Zupon keep in touch regularly via text messages, phone calls, and visits. Last month, for a Yale Athletics press release announcing Zupon’s nomination for the Hockey Humanitarian Award, Giana commented: “I can always talk to Alyssa about school and my illness, and she always has an ear ready to listen. She comes to many school activities such as chorus concerts to cheer me on.”

“When I started Bulldog PAWS, I couldn’t imagine being hooked up with a better person than Giana,” remarks Zupon. “She’s so bubbly, enthusiastic, and courageous, and she is smart beyond her years. She’s been through a lot, and is an inspiration to all of us on the team.”

While visiting her mother’s native country of Japan not long after the earthquake of March 2011, Zupon sprang into action after she saw some of the areas most devastated by the disaster.

“My first reaction was, ‘Wow, this is daunting! I can’t imagine how to help in any way that would really make a difference,’” recalls Zupon. “But then I met with a school principal in an area that was hard hit, and we talked about relief. I decided it was time to move from being overwhelmed to doing something.”

With a Japanese friend of her mother’s, Zupon founded Hope for Tomorrow to assist with recovery efforts in Japanese high schools. In addition to arranging for donations of computers and other equipment to schools, Zupon established a program to help encourage high school students in their future dreams and aspirations. As the chair of North America Student Affairs for Hope for Tomorrow, Zupon coordinates the efforts of U.S. volunteers who engage in weekly reading and conversation groups with the students, connecting via Skype and the donated commuters. She — along with more than a dozen Yale students — is also a volunteer tutor to the Japanese students. 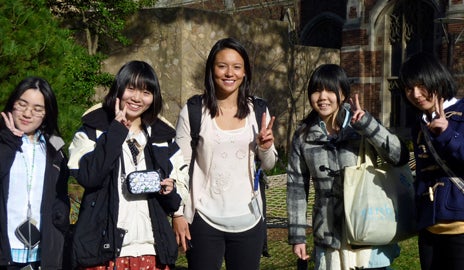 “The purpose of these interactions is to improve their English conversation skills and, ultimately, assure them that they are not alone and that they can still achieve their dreams despite hardship,” says Zupon, who is fluent in Japanese. “The kids wake up before school to talk to me and the other Yale students. Some are eager to talk about their experience as survivors, while others are curious about American culture. We become friends, and it’s healing for them. The program is mutually beneficial for those of us who participate: The high school students’ own perseverance is inspirational, and it’s nice to be reminded that people don’t take things for granted.”

In the past year, Zupon has helped coordinate two U.S. visits for the Japanese students. Last spring, Hope for Tomorrow and The Harvey School in Westchester, New York, sponsored two-week home stays and American school visits for a small group. This month, six more students will visit the Horace Mann School in New York. During their time here, the students will also visit Yale on April 4, and they will attend a lecture, tour campus and YNHH, meet an admissions officer, make presentations about their experiences with the disaster, and interact with Hope for Tomorrow’s Skype session volunteers.

This summer, Zupon will spend a few months working in a health clinic in Indonesia, and will also continue her work in Gunel’s lab, where she is studying ependymomas — the third most common pediatric brain tumor — and is attempting to find mutations that might be responsible for the tumors. She then intends to spend a few months in Japan expanding Hope for Tomorrow before entering medical school.

Humble about her own service work, Zupon instead credits others in her life for giving her drive and inspiration. Among them is her former hockey teammate Schwartz.

“I played with her for half a year, and her locker was next to mine,” says Zupon. “Mandi turned her own situation into something positive for those around her, and was one of the most selfless people I have ever met.”

Along with her teammates, Zupon has played in a “White Out for Mandi” fundraiser game at Ingalls Rink each season to raise money for the Mandi Schwartz Foundation, which was started by her former teammate Hughes. The team is also one of the hosts of a Bone Marrow Registration Drive on campus and participates in the annual Relay for Life for the American Cancer Society, among other activities.

Zupon has maintained a 3.55 cumulative grade-point-average at Yale, and says that she still finds time to spend with friends, play guitar, and participate in other activities. She also has a first-degree black belt in Tae Kwon Do.

“I can see friends on weekends, and I don’t waste my time on Facebook,” says the Yale senior. “If there is anything that has limited my social life, it is hockey, and not my service projects. But I haven’t for a second regretted my decision to play hockey in college. I love teamwork and love being in a group working toward something. I enjoy hockey and sport in general, as I am a very competitive person.”

Her competitive spirit might mostly be confined to the hockey rink, however, as Zupon demonstrates no competitiveness when asked when she will hear whether she has been selected this year’s recipient of the Hockey Humanitarian Award.

“I’m not exactly sure when I’ll hear,” she says. “I’m honored and surprised simply to be a finalist.” Each finalist received a donation in the name of his or her favorite charity.

The BNY Mellon Wealth Management Hockey Humanitarian Award will be announced at a ceremony on April 12 in Pittsburgh, Pennsylvania.