President-elect Peter Salovey called her “a passionate supporter of the investment in the future of American science and engineering.”

Of herself, U.S. Rep. Rosa DeLauro said that surviving cancer had made her a steadfast believer: “I am here today thanks to the grace of God and the hard work of biomedical research…I arrived in the Congress knowing first-hand [its] crucial importance.”

In a Jan. 31 ceremony at Yale’s Center for Engineering Innovation and Design, University leaders celebrated Yale’s hometown Congresswoman and her commitment — not universally shared on Capitol Hill — to ensuring robust federal support for university science.

“We need very strong voices to make the case, and Rosa is certainly among the strongest,” Levin said as he and Salovey presented her with a “Champion of Science Award” before a crowd of Yale science luminaries, including 2009 Nobel Prize winner Thomas Steitz.

The honor — from The Science Coalition, a non-profit organization of about 50 major research universities — recognizes members of Congress “whose actions and votes consistently reflect their belief” in the value of university-based research for human health and economic development. Yale nominated DeLauro.

In her remarks, DeLauro reaffirmed her commitment to federal science support — and said 2013 is no time for science advocates to relax.

Debates underway in Washington threaten the budgets of many federal agencies that pay for the bulk of science research at America’s universities. Absent Congressional action, the National Science Foundation, National Institutes of Health and other primary research grant makers face billions of dollars in budget cuts over the next decade. The cuts would begin in March and have long-term, far-reaching consequences.

“There is no such thing as a one-year cut,” said DeLauro, who helped double the National Institutes of Health’s research money between 1998 and 2003 and has made a priority of women’s health initiatives. “… We need to fight against those cuts.”

In the most recent fiscal year, Yale researchers relied on more than $550 million in federal support. The money — representing more than 80 percent of total 2012 Yale grant and contract income — helps pay for the costs of research, including investigator salaries, stipends for graduate students, lab equipment and materials, as well as for the use of shared scientific instruments, technologies and services.

“As we gather, the possibility of deep, across-the-board budget cuts — known as sequestration — poses historic risks for science and engineering,” said Salovey. “Unless Congress finds a compromise to avert the cuts, the crippling impact could last a generation.”

Yale’s leaders and DeLauro underscored the role that bold, sustained scientific experimentation plays in human health and well-being — and in the economy. In the last decade, federally funded research at Yale has spawned more than 50 start-up companies in greater New Haven alone, attracting more than $4 billion in private capital investment and generating new jobs and tax revenues.

Yale scientists and clinicians pioneered the use of cancer chemotherapy, designed the artificial heart pump, enabled some of the earliest AIDS drugs, and identified Lyme disease. Recently they: 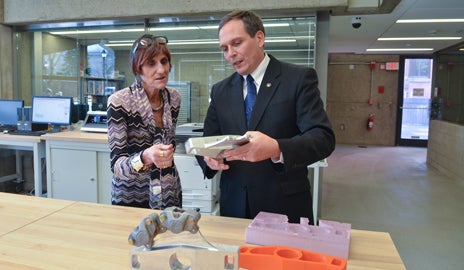 Universities often provide initial institutional support for researchers to establish laboratories. Yale typically provides between $850,000 and $1.5 million for assistant professors to set up and begin work, for example. But scientists at all U.S. universities rely on federal support for individual projects. And competition for grants is fierce. The National Institutes of Health, for example, funds fewer than one in ten applications.

Diminishing resources hurt both new and established scientists, who abandon promising research, downsize labs, and divert attention from science itself to the hunt for money. This delays the production of knowledge and in turn new medicines, treatments, and technologies.

“Research works more like an ecosystem, where synergies between different components are crucial,” Daniel Colon-Ramos, an assistant professor of cell biology at Yale School of Medicine who studies the neural circuitry behind human behavior, has said. “If you cut enough of it, it just collapses.”

DeLauro, first elected in 1990, vowed to help prevent that outcome.

“Good government has always invested in the march of science,” she said. “And I consider it my charge in the Congress to continue that tradition forward.”

Yale’s hope, Salovey said, is that “with her continued help, the best days of our federal research agencies are yet to come.”