‘The Art of Inauguration’ — live and on the Web

Elizabeth Alexander knows better than most what it’s like to make art for an unusually public and historic event: The poet and Yale professor wrote the celebratory poem for President Obama’s first inauguration, delivering it before a vast audience at the 2008 inaugural ceremony. 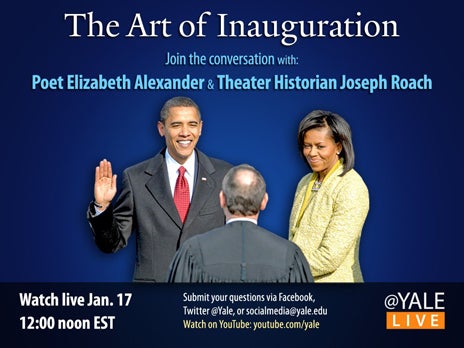 As the nation prepares for Obama’s second inauguration (Jan. 21), Alexander will appear on @YaleLive on Thursday, Jan. 17, to discuss her experience at the inauguration and her role in it. Professor Joseph Roach of the Yale School of Drama joins her to discuss the stagecraft of inauguration — that is, inauguration as a performance.

Viewers may submit questions before and during the interview via Yale Facebook, Twitter@Yale or socialmedia@yale.edu.

@YaleLive broadcasts on the University’s YouTube channel at noon (EDT). The live video interview offers people worldwide an opportunity to query Yale experts. It will run about 45 minutes.

A 2005 Pulitzer Prize finalist for her book of poems “American Sublime,” Alexander is one of only four poets to compose and deliver a poem at the inauguration of a U.S. president. (Next week Richard Blanco will become the fifth.) The others were Robert Frost (1961), Maya Angelou (1993) and Miller Williams (1997). For Obama’s inauguration Alexander wrote and delivered “Praise song for the day.” She is chair of Yale’s African American studies department and also a professor of English.

Roach is a theater historian, stage director, and performance studies scholar. A Sterling Professor of Theater and English, he is the author of “The Player’s Passion: Studies in the Science of Acting” (1985), “Cities of the Dead: Circum-Atlantic Performance” (1996) and “It” (2007).