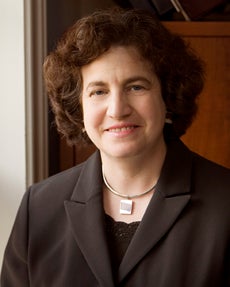 For Marian Chertow, one person’s trash is another’s raw material. She is fond of asking, “Why waste waste?”

An associate professor of industrial environmental management at the School of Forestry & Environmental Studies (F&ES), Chertow has been named president of the International Society for Industrial Ecology and will begin serving a two-year term in January. Founded in 2001, the society has over 500 members from 41 countries.

An emerging field of study, industrial ecology may sound like an oxymoron, but it is an intuitive call for more creative approaches to resource management, she says. It views urban landscapes much like scientists view natural ecosystems.

“It is a funny use of two words,” comments Chertow. “We often think of industry in opposition to ecology.”

She explains that the flow of materials, water and energy through a manmade system is much the same as a biologist or zoologist tracing the life cycle of plants and animals through an ecosystem. In her research, Chertow focuses on the urban “jungle.” She traces the pathways of steam and sludge through smokestacks and drainage pipes to ask whether output by one industrial process may, in fact, be valuable input for another.

Simply put, if society doesn’t have the resources, it won’t be able to produce the goods and services that people rely on. That ethos permeates the course, “Corporate Environmental Management and Strategy,” which she teaches at F&ES and the Yale School of Management, where she obtained a master’s degree in public and private management in 1981. She went on to receive a Ph.D. from Yale and has published in a raft of technical journals. Her paper, “Industrial Symbiosis Literature and Taxonomy,” published in the Annual Review of Energy and the Environment, is cited globally and has helped establish the study of resource sharing.

Chertow traces her interest in industrial ecology to her days in college when a friend’s father ran a startup recycling company in Connecticut. She became a waste expert or, as the New Haven Advocate called her, a “garbage guru” while head of the state authority responsible for resource recovery, where she spearheaded the construction of a billion dollars-worth of waste management infrastructure throughout the state.

“Once you start looking at the waste stream, you must look at the entire system that produced the waste in the first place,” says Chertow. “That’s the notion of life cycle analysis, examining a system from production to waste. That’s what industrial ecology does.”

Since 1991 she has been director of the Industrial Environmental Management Program, and her teaching and research focus on industrial ecology, environmental technology innovation, and business and the environment.

She led a multiyear effort to consider future directions for environmental policy, resulting in “Thinking Ecologically: The Next Generation of Environmental Policy,” edited with Daniel Esty and published by Yale University Press in 1997. She has testified on waste, recycling, and other environmental issues before committees of the U.S. Senate and House of Representatives, and was on the founding faculty of a new environmental master’s degree at the National University of Singapore where she still teaches every year.

The International Society for Industrial Ecology is composed of natural and social scientists, engineers, policymakers, and practitioners who promote the practice of industrial ecology in research, education, industrial policy and community development in order to promote a sustainable economy. As president, Chertow will also be an ex officio member of the management board of the international Journal of Industrial Ecology, the official journal of the scholarly society.