Recovering America’s economic strength should be a top priority for President Barack Obama in his next term, former British prime minister Tony Blair and former Mexican president Ernesto Zedillo agreed during a campus conversation on Dec. 3 — and both expressed confidence in his ability to get the country on solid economic footing.
By Susan Gonzalez
Share this with Facebook Share this with Twitter Share this with LinkedIn Share this with Email Print this

Recovering America’s economic strength should be a top priority for President Barack Obama in his next term, former British prime minister Tony Blair and former Mexican president Ernesto Zedillo agreed during a campus conversation on Dec. 3 — and both expressed confidence in his ability to get the country on solid economic footing.

The two former leaders also offered their perspectives on a range of international conflicts during their discussion on the topic “Global Crises: The Way Forward,” which was moderated by President Richard C. Levin.

Before a packed audience in Battell Chapel, Blair — who now serves as the official envoy of the Quartet on the Middle East — and Zedillo — the director of the Yale Center for the Study of Globalization — also discussed globalization, the Israeli-Palestinian conflict and the prospects for peace in the Middle East, the European debt crisis, and international progress in addressing climate change.

The founder of the Tony Blair Faith Foundation in 2008, the former prime minister said his interest in promoting study and research on faith began when he realized that globalization had created less homogenous and more technologically connected societies, and that increased diversity also created a need for greater understanding.

“Half of the conflicts today in the world have a religious dimension,” Blair noted. “We cannot understand them without understanding [the role of] religion.” He cited the Middle East conflict and the situation in Burma — where, he noted, half a million people have been displaced in a dispute between Buddhists and Muslims — as examples of conflicts with global repercussions that require “a whole set of different initiatives” to resolve them. 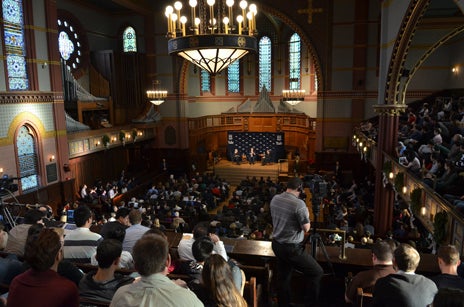 Asked by Levin whether he believed the present ceasefire in Gaza is a sign of hope in the Israeli-Palestinian conflict, Blair answered, “The truth is, we are at an impasse. … We need for weapons to stop coming into Gaza and for Gaza to be opened to the world again.” He stressed the need for “viable” peace negotiations between Israel and Palestinians, whose long, unresolved conflict “has a poisoning effect on relationships within the region,” he said.

“One of the things we’ve learned about the world today is that you’ve got to try to look at the world through a different set of eyes,” said Blair. “Because I’m so often in Jerusalem, I see this dispute in the way it is displayed in al-Jazeera and on Israeli television. Literally, we have the same facts in two different universes. If you are someone living in the Arab world at the moment, you see pictures in Gaza of children being killed by Israeli air strikes. You’re angry, and bitter about Israel and its allies. If you are in Israeli, you see people taking shelter every night. … One of the things that is really important is to build bridges of understanding in the Middle East to help each side understand why the other is thinking as it does.”

Zedillo called for a more “holistic” approach to the Middle East conflict that would include a more strategic policy toward — and engagement with — Iran.

“The United States has to deal with Iran in a fundamentally different way than it is at present,” he said. “I don’t see how we will have a solution [in the Middle East] if our interaction with Iran doesn’t change.”

Zedillo added that the Israeli populace is nearly unanimously in favor of the creation of a Palestinian state, but that politics in the region interfere with such a solution.

“The politics in that country is controlled by someone else, not by the 99% of people I talk to in the community,” he commented.

Both former leaders noted how much the Arab Spring has changed the Middle East, and agreed that the future of the region depends upon what happens in “delicate” countries such as Egypt and Syria. They urged support for the democratic initiatives in these evolving revolutionary regimes. Blair noted that one of the dangers of such revolutions — as Iraq proved, he said — is that after eliminating the dictatorial governments, there is often an escalation of conflict between different religious, tribal, and other factions.

On the issue of climate change, Blair said that Obama’s re-election creates an opportunity to create international agreement with regard to the environment, while Zedillo emphasized that such an agreement is critical for the future of the planet. He said that future generations will face disaster if the United States simply “makes a list of wishes” that go nowhere, rather than working to reduce its own energy dependence and carbon footprint.

The two former heads of state concluded their discussion with some advice for Obama and their hopes for the future of America. Both said they hope for economic recovery and for the United States to maintain its democratic values.

“Ultimately, everywhere I go, what people want is the same,” noted Blair. “They want to bring up their families with a certain amount of security, and to have their children do better than they did — or to at least have that opportunity.

“This is why the world needs America’s leadership,” he continued. “I say to America: Give up on being loved. Be the best you can be and give that leadership to the world because the world is better for it.”

Added Zedillo: “This country has incredible potential. … We all need the United States to do well and to have leadership. You don’t get it by saying the right thing but by doing the right thing. Right now, Obama has a great opportunity, but he has to have a plan — a very comprehensive plan — and he has to swallow a lot of discomfort within the next few weeks or months. This is the moment of truth to get this country a viable sustainable program to recover its economic vigor, and he can do it.”

A video of their full discussion can be found online.