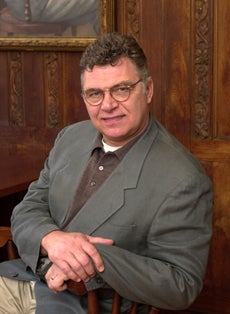 John Mack Faragher, the newly designated Howard R. Lamar Professor of History, is a scholar and teacher of the history of the American West.

The director of the Howard R. Lamar Center for the Study of Frontiers and Borders at Yale, Faragher has authored or co-authored numerous books, including “Women and Men on the Overland Trail”; “Sugar Creek: Life on the Illinois Prairie,” which won the Early American Republic’s annual book prize; “Daniel Boone: The Life and Legend of an American Pioneer,” which was awarded the annual book prize of the American Round Table of New York, the Los Angeles Times Book Prize for biography, and the State of Kentucky’s Governor’s Award; “The American West: A New Interpretive History” (with Robert V. Hine), which won both the Caughey-Western History Association Award for the most distinguished book of western history and the Western Heritage Award of the National Cowboy & Western Heritage Museum; “A Great and Nobel Scheme: The Tragic Story of the Expulsion of the French Acadians from their American Homeland”; and “Frontiers: A Short History of the American West” (also with Hine). He is currently on sabbatical leave, writing a narrative history that focuses on the problem of violence and justice in 19th-century frontier Los Angeles, California.

Faragher earned his Ph.D. at Yale in 1977 (Howard R. Lamar was his graduate mentor and dissertation adviser) and returned to the University as the Arthur Unobskey Professor of American History in 1993 after teaching for 15 years at Mount Holyoke College. He was the director of graduate studies in American studies from 1999 to 2003 and chair of the Program in American Studies at Yale from 2004 to 2006.

The Yale historian has been a consultant for a number of educational television programs, as well as for the redesign of the National Park Service’s Cumberland Gap National Historical Park and for the Abraham Lincoln Digitization Project. His honors include a Graduate Mentoring Award from Yale in 2001.