Yale will help support the scientific development efforts of Brazil as one of the participating universities in the Science without Borders (SWB) program.

Over the last 10 years, Yale has made significant investments in science and technology. With Brazil’s expanding economy creating a need for more chemists, physicists, computer scientists, and engineers than Brazil can train entirely within its own institutions, Yale’s participation in the SWB program — made official via an agreement signed by Dr. Jorge Almeida Guimaraes, president of CAPES, the Brazilian Agency for Support and Evaluation of Graduate Education, and Yale Provost Peter Salovey — will help the country in its goal to train scientists and engineers.

The Brazilian government announced in the summer of 2011 the SWB plan to invest over US $2 billion in 75,000 science and technology scholarships by the end of 2014. The main goal is to promote the consolidation and expansion of science, technology, and innovation in Brazil through international exchange and mobility. The program provides funding for students in full Ph.D. programs in the United States, as well as for postdoctoral fellowships and undergraduate programs.

At a conference, Yale faculty members Michael Cappello, professor of pediatrics, microbial pathogenesis, and public health at the Yale School of Medicine; Lynn Cooley, the C.N.H. Long Professor of Genetics and Professor of Cell Biology and of molecular, cellular, and developmental biology and director of the Combined Program in the Biological & Biomedical Sciences; and Holly Rushmeier, professor and chair of computer science, recently discussed SWB, the groundbreaking science and engineering work being done at Yale, and the academic programs to which Brazilian students may be interested in applying. 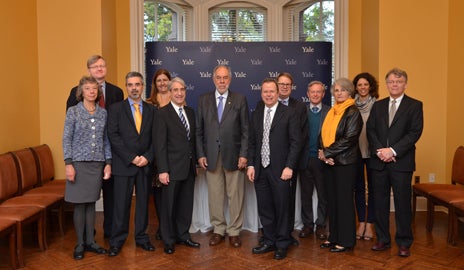 Since purchasing West Campus in 2007, Yale has established six research institutes, as well as redesigned the core facility in genomics, where the University has become a world leader in the use of whole genome sequencing for medical diagnosis and intervention. Yale students can also take advantage of the new Center for Engineering Innovation and Design, which promotes collaborative technology development among students from a wide range of disciplines.

“We are proud of the outstanding students and scholars from Brazil who have attended Yale and who are currently on our campus,” said Salovey. “Yale is honored to partner with CAPES, and we anticipate that this collaboration will enable us to welcome increased numbers of outstanding Brazilian students to campus through the Science without Borders program.”

Due to efforts led by Denis Mizne, a 2007 World Fellow at Yale and executive director of the Lemann Foundation, Yale will work closely with the foundation — a non-profit organization that aims to improve the quality of public education in Brazil — to recruit talented Brazilians to apply for admission to Yale’s academic programs.

This agreement furthers the growing number of collaborations Yale has with Brazil, which include summer courses in Paraty and Rio de Janeiro, exchanges in law and infectious diseases with the Universidade de São Paulo, the Fox Fellowship Program, and membership along with Fundação Getulio Vargas in the Global Network for Advanced Management.