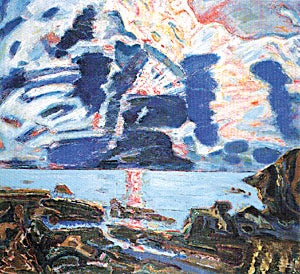 Long-time Yale faculty member Bernard Chaet, a noted painter and draftsman who was instrumental in transforming Yale’s traditional art program into one with a more modernist approach that gained national prominence, died on Oct. 23 at the age of 88.

Chaet was the William Leffingwell Professor of Painting form 1979 until his retirement in 1990. In his own work, he melded landscape and abstraction in a traditional established by Vincent Van Gogh, Georges Seurat, Edvard Munch, Piet Mondrian, and Fernard Hodler. His own tenure began in 1951 at Yale, where he worked closely with Josef Albers to revamp Yale’s art program. Between 1959 and 1962 he was the chair of what was then called the Yale Department of Art of the School of Fine Arts — prior to becoming one of the independent professional schools at Yale in 1973. Chaet taught painting and drawing and mentored generations of emerging talents.

Chaet was the author of the 1970 textbook “The Art of Drawing” and “An Artist’s Notebook 1979,” both of which have since been reissued several times. In the latter book, alongside examples of work by his favorite artists, are student drawings by Yale graduates such as Robert Birmelin, Michael Mazur and Eugene Baguskas.

Born in Boston, Massachuetts, in 1924, Chaet studied at the School of the Museum of Fine Arts in Boston and then earned a B.A. at Tufts University.

Known for his expressionist landscapes and still lifes, Chaet’s work has continuously been shown in galleries in his native Boston, in New York City, and around the country. In 2010, a retrospective of his seascapes was featured at the Cape Ann Historical Society in Gloucester, Massachusetts, where he had a home and a summer studio in nearby Rockport. His most recent exhibition was in June 2012 at David Findlay Gallery in New York. There is presently a solo exhibition of his work at Swarthmore College.

Many of Chaet’s students went on to notable art careers, including Janet Fish, Chuck Close, and Richard Serra.

In a recent campus publication, Chaet’s friend and School of Art colleague William Bailey called the painter “one of the great figures in American art.” His work is represented in the collections of the Brooklyn Museum, the Art Institute of Chicago, the Metropolitan Museum of Art in New York, the DeCordova Sculpture Park and Museum in Lincoln, Massachusetts, the Hirshorn Museum and Sculpture Garden in Washington, D.C., the Museum of Fine Arts in Boston, and the Yale University Art Gallery. He has been honored with numerous awards, including a Distinguished Teaching of Art Award from the College Arts Association, the Altman Prize for Landscape from the National Academy of Design, and the  for his painting “A.M.”

Chaet is survived by his wife, Ninon Chaet; his daughter, Leah Vogel; and two granddaughters.

A memorial exhibition in honor of Chaet at the Yale School of Art will feature the work of his students from 1950 to 1990. The exhibit will run through Nov. 4 in the Green Hall Gallery, G-Level, 1156 Chapel St.