When professor and astrophysicist Priya Natarajan read the recent Yale study on gender bias in academic research among scientists, she was surprised­ — but not completely.

“My first response was that it’s disappointing, but not shocking,” says Natarajan of the study, which was co-authored by her Yale colleague Jo Handelsman. “Gender bias is alive and well, even in the sciences, where we tend to believe that the scholarship can be evaluated objectively.”

As a graduate student at Cambridge and the Massachusetts Institute of Technology, (MIT) she knew well some of the challenges women in the fields of science, technology, engineering and math (STEM) face. Despite her own positive experience, she was aware of a number of her classmates who chose not to pursue advanced degrees in Physics due to lack of encouragement or mentoring that could have made a difference in their decision.

“Sadly, many of the findings of this study resound with female scientists,” comments Natarajan. “What was most surprising, however, is that women are less likely to be mentored. Perhaps this can be attributed to the perception of a cultural bias against women:  If women are less likely to become top scientists because their work is less valued generally, then mentoring women might become a less compelling proposition. This is a vicious cycle that needs to be broken and can be broken with awareness of our inherent biases.”

Today, as the chair of the Women Faculty Forum (WFF), Natarajan finds herself in a unique situation — one that can help bring about positive progress for women on campus. As it has for the past 11 years, the WFF will continue to sponsor projects and initiatives that help women navigate the pressure points of their academic careers, broaden their profile as leaders, and expand their influence.

One such project currently underway is the first “side-step” mentoring program for women, which pairs 40 junior with 40 senior female faculty members from varying disciplines and fields. By matching pairs from different backgrounds, the goal of the program is to facilitate nurturing relationships, in a less formal professional context, without the dynamic Natarajan calls the “like-with-like” bias.

“People tend to gravitate towards mentoring those who look like themselves,” Natarajan remarks. “Often this bias is unconscious.”

Changing the culture where such biases are present is a gradual process, she adds. The WFF recently released a report called “Women, Men, and Yale University:  A View from 2012,” which documents the number of female and minority faculty members at Yale, by categories such as tenure track, schools, and administrative positions over the past decade. WFF post-doctoral research associate Dr. Allison Tait compiled the data provided by Yale’s Office of Institutional Research.

According to the report, women faculty and administrators have made progress, but slowly so. Over the past decade, there has been a 7% increase in female ladder faculty members, a 4% increase in non-ladder faculty, and a 5% increase in women postdoctoral trainees.  Female managerial and professional staff representation remains high at 64% — the same as it was a decade ago. Women now comprise 50% of University officers and a quarter of Yale trustees.

“In the last 10 years, we have seen a total of 7% growth in the number of tenured women in the University,” says Natarajan. “While it’s great that the gradient is positive, the rate is simply too slow. Being aware of the numbers is an eye-opening step.”

Progress has been particularly sluggish for women faculty in the STEM fields. Women represent 11% of tenured faculty in the physical sciences ­and 19% in the biological sciences — a modest increase of 6% and 1% respectively over the past decade. This is in contrast to the Humanities, which experienced a 5% increase in female faculty from 25% to 30% this past decade.

“The WFF report shows that positive progress has been made, just not at the pace we would like to see,” remarks deputy provost for faculty development and diversity Frances Rosenbluth. “This is one reason the WFF’s side-step mentoring and other programs that encourage female faculty to promote their own voices and sharpen their leadership skills are so important. There is still work to be done.”

One program introduced last year under former WFF Co-Chair Laura Wexler’s initiative was the WFF’s Public Voices Thought Leadership Fellowship, which was co-sponsored by the Office of the Provost. According to Wexler, the fellowship “aims to shift the way the world is narrated, by changing who speaks and whose opinions are published.” Twenty senior female and minority male professors were mentored by top journalists in a seminar setting, for the purpose of increasing the likelihood of publishing their opinion pieces in national media outlets. By increasing the number of opinion pieces written by women and diverse faculty, the more public commentary starts to reflect a broader range of thoughts and opinions. During the course of the nine-month program alone, 32 opinion pieces were generated by participating fellows and published in outlets such as the New York Times, Huffington Post, and CNN — which last week published an opinion piece written by 2012 fellow Meg Urry on the gender bias study.  The WFF has sponsored the program again this fall, hosting 19 new fellows.

Also returning this year will be a conference on gender parity in society, which was co-sponsored by the WFF last year with the Gruber Program for Global Justice and Women’s Rights at Yale Law School and the Edward J. and Dorothy Clarke Kempf Memorial Fund at the MacMillan Center. The conference titled “Parity as Practice:  the Politics of Equality,” convened by Judith Resnik, Reva Siegel and Natarajan brought international scholars to campus to discuss the effectiveness and nature of parity programs, as instituted in areas such as education, government, and corporations. 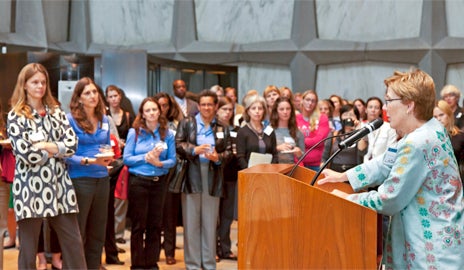 Additionally, the WFF recently received a grant from the Alfred P. Sloan Foundation for a study of gender parity issues at the University. In partnership with the Gender Equality Project, a non-profit based in Switzerland working with workplaces around the world to “close the gender gap,” the WFF will launch an initiative later in the fall to develop a self-assessment tool for the University to measure progress for women and minority faculty. Details of the upcoming project are forthcoming.

On Tuesday, October 9, WFF is co-sponsoring a panel titled “How to Nurture Women Leaders: A Global Conversation” that Natarajan will moderate. This talk, which is free and open to the public, will take place 5:30-7 p.m. in the auditorium of the Yale University Art Gallery, 1111 Chapel St. Hosted by the World Fellows Program, the Forum of Young Global Leaders of the World Economic Forum, the WFF, Yale Women and the International Festival of Art and Ideas, the panel’s participants will include current and past Yale World Fellows.