One of the first civic actions that human rights and democracy advocate Daw Aung San Suu Kyi took after her first release from house arrest in Burma in 1995 was to establish a legal aid committee designed to help the many members of her political party who had been imprisoned for their opposition to the long-ruling military government there.

In her speech at Yale on Sept. 27 as a Chubb Fellow, Suu Kyi told her audience in Sprague Hall that while she knew the committee was unlikely to win the freedom of her colleagues, its existence would nonetheless give them — and others fighting for the cause of democracy in Burma — confidence that they would not be abandoned. In addition, she said, their legal cases would be put on record “for generations to come.”

The committee, in fact, won only one legal defense case of the thousands it handled, and the judge who decided the case was punished for taking a stand against the government by being relegated to a remote part of the country, Suu Kyi said.

Her personal experience and that of the thousands who have been imprisoned for their opposition to the military regime in Burma taught her that unless rule of law is established there, the country’s citizens “would never be free from fear — they would always be afraid that even if they did nothing wrong, action could be taken against them,” Suu Kyi stated.

Her Yale speech emphasized that establishing rule of law in her country, beginning with judicial reform, was a top priority for her and other members of the National League of Democracy (NLD) — the party she helped found in 1988. She chairs the party and has represented it as a member of the Burmese parliament since April of this year.

Suu Kyi spoke on campus as part of a three-week tour of the United States — her first visit to the country since her release from house arrest in November 2010. Before her Yale visit, she spoke on several college campuses, met with President Barack Obama and Secretary of State Hillary Clinton, and received the Congressional Gold Medal.

Free tickets for her Yale talk were sold out within hours of the announcement of her visit, and her Chubb Lecture was also simulcast in Levinson Auditorium of Yale Law School. Hundreds of people watched a live video stream of her Sprague Hall address.

Suu Kyi earned international attention when she made the decision to remain under house arrest in Burma in 1989, causing her to be separated from her husband and children for most of her time under military surveillance. She spent more than 15 years between 1990 and 2010 in isolation, keeping in touch with the outside world by listening to a short-wave radio and filling some of her time reading books. She was awarded the Nobel Peace Prize in 1991 and has been recognized with numerous other awards for her crusade for democracy in Burma.

In introducing Suu Kyi, President Richard C. Levin noted that since her final release from house arrest two years ago, she has worked with Burma’s civilian government to win the release of hundreds of political prisoners and to further other reforms. “Thanks to Daw Suu’s courage, and the inspiration she has provided to the people of Burma, the prospects for the restoration of democracy are greater now than they have been for decades,” Levin remarked, citing political and economic liberalization and greater freedom of the press among the country’s more recent achievements.

Suu Kyi said in her speech, however, that while many people are heartened by these reforms, Burma cannot be considered on the path to democracy until its citizens are protected by a fair and independent judicial system. She noted that she and other representatives of the NLD adopted a three-part platform that calls, in order of priority, for the establishment of rule of law, an end to ethnic conflict, and amendments to the Burmese constitution.

Suu Kyi noted that several “sections” of Burmese law — including those that allow for detention or imprisonment without trial and one that permits the government to arrest those who oppose it to “protect the state against destructive elements” — as examples of unjust laws in her country that must be abolished.

In her own case, she said, the freedom of the government to “slap on charges” to silence political protest allowed it to add years of confinement for her without due process.

In the past, she recalled, many people were arrested simply for distributing the U.N. Declaration on Human Rights, even though the Burmese government was a signatory of the declaration. At the trials of many political prisoners, she said, judges were handed orders from the government stating the terms of their criminal sentences. She described how, after the arrest of one NLD member, he asked the military officers what the charges were against him, and whether they had a warrant. “The officer answered, ‘Don’t be ridiculous, we already know the sentence,’” said Suu Kyi.

“That was rule of law in Burma,” she lamented. “The law only worked for those in power. It was not there to protect the people or protect our democratic rights.

“Unless there is rule of law,” she asserted, “there can be no guarantee of our human rights.”

Since her election to parliament, Suu Kyi has been working with colleagues to explore ways to reform the judiciary in Burma. She helped organize a group of experienced lawyers and judges to examine ways to create an independent judicial system. She said that practical recommendations eventually will be made to various government ministries.

Citing rampant corruption among civil servants in Burma, Suu Kyi maintained that there is currently “hardly a judicial branch to speak of” in her country.

“There will have to be laws that will enable us to take action against civil servants and judges who are corrupt,” she asserted. “We will have to start by imposing the rule of law on the judiciary itself.”

She called on her audience to help support her and other advocates for democracy in Burma as it attempts to train and educate future lawyers, improve law schools in the country, and educate citizens so that they know that they must respect the law if they are to “expect” legal protections.

“If we can achieve all of this, then we can be confident that Burma is firmly on the road to democracy,” she said. 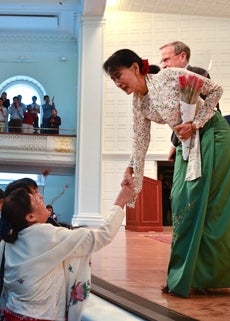 Following her address, Levin read questions that audience members prepared in advance of her talk, which addressed such topics as ethnic conflict, religious freedom, and economic development. On the latter topic, she said, “We have to be careful of too much concentration on the economic side. Economic development is no substitute for a democratic, fair judiciary.” She added that the international community can best provide assistance by helping to train future Burmese judges and by establishing internships for those studying the law.

Questioned why she believed she was finally freed from house arrest and allowed to be a participant in government, Suu Kyi said the establishment of a civilian government played a role and that the current government has recognized the need for reform in the country.

Asked what advice she would give to others based on her personal experience, Suu Kyi answered: “Inner resources are important to keep you going under all circumstances. These inner resources you acquire throughout life, not just during your years in school. I would say to try to strengthen yourself internally. Don’t depend too much on external factors. You must be able to live with yourself. What is important for you is not just to be able to suffer the hardships of bad fortune but also to know how to suffer the forces of good fortune.”

Before a luncheon with guests at the President’s House, Suu Kyi met with reporters from YaleNews and the Yale Daily News. Asked there how she has been able to forgive those who constrained her freedom, she said, “I never felt I had anything to forgive anyone for. They gave me the option to leave, to go back to my family. I knew what I was doing. I choose not to. So what is there to complain about?”

When Suu Kyi learned that Yale Daily News reporter Lorenzo Ligato wrote his Yale admission essay about her, she asked him for his email address, saying she hoped to have further conversation with him.

“I am surprised when young people take an interest in what we are doing,” she told the Yale sophomore. “I am very, very touched you care about what is going on in our part of the world.”

She also offered her thoughts on how Yale students could help in her cause for democracy.

“You are a very privileged group,” she said. “Yale is one of the best universities in the world. You should use your good education to try to help others. You should not just use [your education] for your own personal benefit. I would like you to share it, especially with us.”

During her visit, Levin announced that the University will help facilitate reforms in Burma by stepping up admissions recruitment of Burmese students and more broadly communicating that parents of Yale College applicants who make less than $65,000 a year are not required to contribute to their child’s tuition, and he reported that Yale will support the establishment of a successor publication to the Journal of the Burma Research Society, which featured scholarly work on Burma before it was shut down by the military regime in the 1970s. Further, as a result of discussions with Suu Kyi, the University plans to bring high school teachers to Yale “to encourage them to raise the sights of their students and advise them on the generous financial aid programs at Yale and elsewhere,” Levin said.

Suu Kyi’s full address can be seen on YouTube.