Reinventing the liberal arts from the ground up 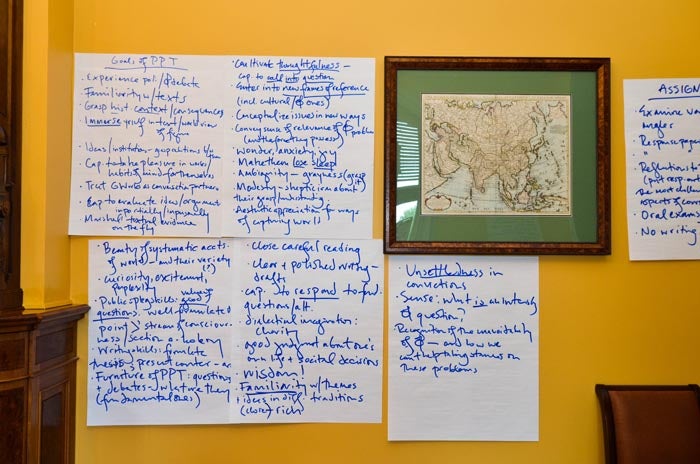 Jan Gruber’s travels through the academy in Europe and Asia have required the physicist-turned-biochemist to adapt to a variety of scholastic disciplines, pedagogies, and cultures. In mid-July, he found himself ensconced in a hilltop mansion on Yale University’s Connecticut campus, immersed in his latest cultural transition. This time he was helping to found the intellectual society he’d joined.

Gruber is among nearly 40 inaugural faculty members of Yale-NUS College, a liberal arts school and joint project of Yale and the National University of Singapore (NUS) opening next year. He and his colleagues had assembled for the first in a series of intense curricular conclaves. Over two weeks, they would address and start answering two fundamental questions: What to teach. And how?

The only verboten activity was conventional thinking — small danger for a group of scholars who had signed on to a trailblazing project. As Andrew Bailey, a philosopher who will teach in school’s humanities division, put it, “Big ideas are on the table again.”

The group’s mid-summer project was not a modest exercise, or a theoretical one: Yale-NUS opens in August 2013 in Singapore, leaving about a year for the newly formed faculty to develop a pioneering course of study. The school is conceived as a model for discourse-intensive liberal arts learning within Asia, and far more than a transplanted U.S. paradigm.

“The idea is to rethink liberal arts education from the ground up,” said Pericles Lewis, the former Yale literature professor who in May was named Yale-NUS’ first president. “What does it take to be an educated person in this century?”

Many members of the faculty — all hired in the last year — had never met. The two-week working session in New Haven was designed to foster intimacy and esprit de corps as well as shape a novel curriculum. “Everyone’s frighteningly smart,” said Gruber, who comes to Yale-NUS from NUS, where he uses worms to study aging. Most of the professors stayed at the same hotel. Work sessions in the parquet parlors of Yale’s Betts House continued informally at local restaurants and watering holes. Yale President Richard C. Levin, an economist, hunkered down with the social scientists to think through a first-year course.

“It’s very personal for everyone,” said Mira Seo, who joined Yale-NUS from the University of Michigan, where she specialized in Latin poetry. “We’re defining our ideals and values as a community. We came from so many different places and we already identify with the (new) college.”

Yale-NUS will open with about 150 students and 50 professors — cohorts expected to reach, respectively, 1,000 and 100 within a few years. The main focus of the New Haven workshop was a series of core courses that will be required of all first-year students: seven or eight multidisciplinary courses blending literature, history, and philosophy, for example; or economics, sociology, and anthropology; or biology, chemistry, and physics.

“Those are also the real curricular challenges,” said Charles Bailyn, a professor of astronomy at Yale now on leave to serve as Yale-NUS’ dean of faculty.

The school, an autonomous unit of the National University of Singapore, will not have traditional academic departments, a structure determined last year by teams of faculty from Yale and NUS that is intended to reinforce interdisciplinary thinking. Faculty will belong to one of three broad divisions: science, social science, or humanities. Many classes will be team-taught by scholars offering complementary expertise.

In New Haven, in small groups and all together, the new college’s faculty described, debated, and doubted, considered, questioned, and probed, analyzed, drafted, and redrafted. Guests unaffiliated with Yale-NUS came and went, raising provocative topics, including Northwestern’s David Zarefsky on the art of speaking well, Yale’s Jo Handelsman on cultivating science majors, and Wesleyan’s Stepehen Angle on teaching Eastern philosophies.

In keeping with the interdisciplinary spirit, even spontaneous, fleeting, self-segregation by discipline was discouraged. Once, when Lewis, the Yale-NUS president, spotted three philosophers huddling during a break, he playfully intervened: “Break it up! Break it up!”

Over two weeks, the group considered a waterfall of interrelated questions.

How do you meaningfully balance Eastern and Western texts and avoid tokenism? Would the Upanishads or the Bhagavad Gita [ancient Hindu texts] provoke more classroom discussion? Are the Confucian Analects too tough for first-year students? How do you teach biology, chemistry, and physics simultaneously? Should all students take the same introductory quantitative reasoning course? What sort of experiments can you do in a multidisciplinary science course?

“You want to do justice to the integrity of each tradition, and you also want to bring them into conversation with each other,” said Bryan Garsten, a Yale political scientist who is playing a key role in curricular development but is not a Yale-NUS faculty member.

Questions of what to teach merged with questions of how, and these with questions of assessment. Would shorter, frequent tests help students learn and retain their learning better than occasional long exams? Should courses be graded pass/fail? How should classroom participation be evaluated? If public speaking skills are valuable in the world, should some exams be given orally?

The atmosphere evoked the spirit of the thing that was coming into being.

“It reminds me of being an undergraduate at Swarthmore College,” said Seo. “There’s a huge amount of intellectual passion.”

Teaching at Yale-NUS will require the professors themselves to be active students. The heavy emphasis on interdisciplinary inquiry and team-teaching means most of them will need to teach material outside their academic specialties. “Nobody knows all they need to know,” said Bailyn.

The scholars appear to view this as an opportunity to teach by example. Most Yale-NUS students will come from Asia and other places outside the United States where discourse-based learning is not customarily a feature of academic culture. In Yale-NUS’ small, seminar-style classes, the paired instructors will take turns assuming a student-like role when their colleague has the floor. In posing their own questions about unfamiliar material and concepts, they’ll demonstrate how to approach new ideas and engage in civil intellectual discourse.

“I want my students to be life-long learners,” said Jeremy Kua, a chemist joining Yale-NUS from the University of San Diego. “What better way to do this than to model it?”

By the end of the New Haven sessions, there was still plenty to do, and nobody was taking time for granted: A week later, the full group set off for Singapore to resume the conversation. Come fall, many of Yale-NUS’ professors will be settled in New Haven for the year. They’ll work out of an office building downtown, near the Yale campus but not on it, day-one employees in an academic start-up aiming to produce something new under the sun.

Said Bailyn, “This is an experience the likes of which none of us will ever experience again.”