A summer of learning about the city while serving the community

Shovels and paintbrushes in hand, 33 students toiled in the sun, planting trees and sprucing up buildings in neighborhoods around New Haven in concert with Yale’s Urban Resources Initiative — and that was even before the students’ real work in the community began this summer as Yale President’s Public Service Fellows (PPSF).

This is the first year that participants have spent a few days undertaking volunteer work as part of the PPFS program. The innovation was introduced by the program’s new director, Karen King, who says that the “service learning opportunity” was a great way for the fellows “to get out and experience New Haven.”

The 2012 President’s Public Service Fellows talk about their summers.

Forging student connections with Yale’s hometown is a key mission of the PPFS program, which was established in 1994 by President Richard C. Levin.

Each summer, Yale undergraduate and graduate/professional students work full-time for non-profit groups or municipal agencies in the city for 8 to 11 weeks, tackling special projects or helping with day-to-day operations, depending on the organization’s needs. The groups get much-appreciated help for free (Yale gives the students a stipend to support their summer stay in New Haven), and the students get an opportunity to experience life in the University’s hometown in a way they never could during the academic year.

A Yale graduate herself (Class of 1993) who grew up in New Haven, King says she understands why some students might not spend time exploring the city that is their home-away-from-home. “As a student, you’re so busy you don’t have much time to look up and learn what’s around you.”

King’s preparations for this summer’s program began in the fall, when she started recruiting organizations to participate in the program. A number are longstanding participants (like New Haven Reads and several City Hall departments), but all local non-profits and city agencies can apply. She visits the sites to ensure that there will be adequate supervision and meaningful, goal-oriented work for the fellows.

Students apply to the program in the late fall and early spring. All students who will be returning to Yale in the fall are eligible, and students can take part in the program only once. Applicants are chosen based on their grades, previous public service experience, and an interview. The chosen candidates are then matched to a host organization.

“We do our best to match the students up with something that they will find fulfilling,” says King.

The fellows learn about their assignments and have the chance to meet each other in March. This is followed in May by a more intensive four-day orientation, which includes talks by invited guests about New Haven’s history, government, and community organizations; field trips to various sites around the city; a variety of team-building exercises; and the aforementioned “service learning opportunity.”

This initiation into all things New Haven continues even after the students begin their PPSF assignments. Every Tuesday, the participants gather for a Fellowship Dinner. Each meeting is held at a different restaurant in New Haven, so the students can learn about the city’s numerous culinary offerings. “Hopefully, they’ll return on their own later,” says King.

Each dinner features a talk by an invited guest. These range from officials from regional and municipal organizations to the heads of participating PPSF groups. There’s a Q&A session after the talk, and King says she has been impressed by the questions the students have asked and the feedback they’ve given the speakers in the group thank-you card they send.

Also as part of the program, the fellows will have a “mid-term” discussion and a closing ceremony. A much-anticipated highlight is a breakfast meeting with Levin, says King.

By the end of the summer, it is hoped that the PPSF participants will become “ambassadors” for New Haven, says King. “We want our students to create long-lasting partnerships in New Haven. We also want our fellows to talk to their colleagues about the city when they go back to school.” In previous years, a number of the President’s Public Service Fellows have returned to volunteer with or work for the organization where they served

“It speaks to the commitment of the students,” says King. “They’re not just in it to have a job over the summer.” 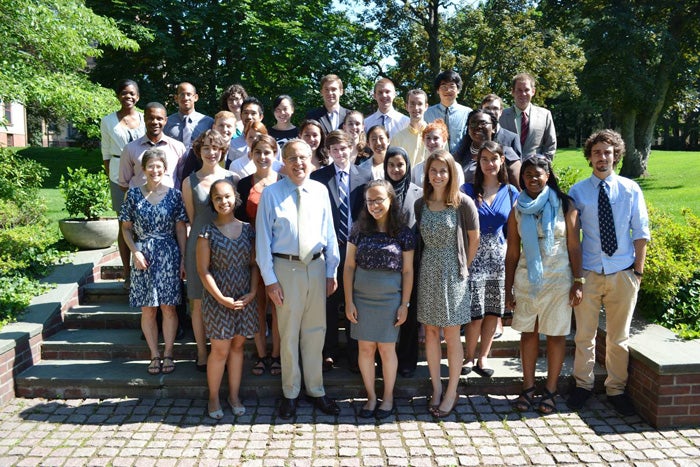