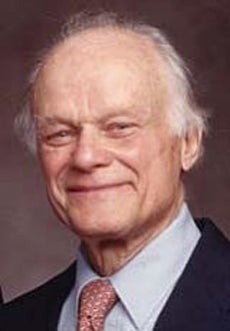 F. Herbert Bormann, an ecologist at the Yale School of Forestry & Environmental Studies (F&ES) who along with Gene Likens discovered acid rain in North America, died on June 7 in North Branford. He was 90.

Bormann joined the faculty at Yale in 1966 and taught there until his retirement in 1992. At his death, he was the Oastler Professor Emeritus of Forest Ecology and a senior research scientist.

Before joining Yale, he was a professor at Dartmouth College. While there, he conceived of the idea to use watersheds to study ecosystems. In 1963, with Likens and Noye Johnson, both of Dartmouth, and Robert Pierce of the U.S. Forest Service, he established the Hubbard Brook Ecosystem Study with a National Science Foundation grant at the Hubbard Brook Experimental Forest in central New Hampshire to study forest ecosystems.

Since then, scores of scientists from universities around the country, the U.S. Forest Service, and the U.S. Geological Survey have conducted research at Hubbard Brook, resulting in the most substantial body of work on the functioning of ecosystems in the world and making the Hubbard Brook Ecosystem Study a scientific model, both nationally and internationally.

In 1971, Bormann and Likens discovered that, as in Europe, rain and snow at Hubbard Brook were acidic. In a paper published in Science in 1974, titled “Acid Rain: A Serious Regional Environmental Problem,” they showed that acid rain was a widespread problem in the Northeast. The results were published in The New York Times, and his testimony on acid rain aided Congress in writing the Clean Air Act.

While at Yale, he taught and developed courses on ecosystems, ecology and land use, and he was instrumental in the creation of a teaching and research program for tropical studies now known as the Tropical Resources Institute at F&ES. His courses were much sought-after, and he remained influential in many of his students’ lives long after graduation.

Bormann’s research also provided insight into the relationship between the natural world and humanity. He co-authored the book “Redesigning the American Lawn, a Search for Environmental Harmony,” published by Yale University Press, which argued that fertilized lawns are environmentally hazardous. He also co-authored numerous other books, including textbooks regularly used in graduate-level classes on environmental studies.

Borman promoted interaction between ecologists and public policy. He set up a number of public seminars, which many people told him changed their lives. He testified a number of times before Congress and served for Connecticut Governor John Dempsey on the Connecticut Scientists for a Quality Environment council.

At 49, he was among the youngest scientists ever to be elected to the National Academy of Sciences. He was also elected to the American Academy of Arts and Sciences in 1972 and was the president of the Ecological Society of America from 1970 to 1971. Among his many awards were the Tyler Prize for Environmental Achievement, International St. Francis Prize for the Environment, National Wildlife Foundation’s National Conservation Achievement Award in Science, Ecological Society of America’s Eminent Ecologist Award, Asahi Glass Foundation’s Blue Planet Prize and, most recently, the Aldo Leopold Award from Yale, which had been presented only one time previously in the history of Yale.

Frederick Herbert Bormann was born on March 24, 1922, in New York City to Carl Bernhardt Bormann and Gertrude Anna Andle, both immigrants from Germany and Austro-Hungary, respectively, and grew up in Westwood, New Jersey. He spent one semester at the University of Idaho before enlisting in the United States Navy after Pearl Harbor. He was a ship fitter petty officer and a welder on submarines in Hawaii. From there, he was selected for officer candidate school on the Princeton University campus until the war ended. While at Princeton, he attended lectures by Albert Einstein.

Bormann received his bachelor’s degree in agricultural science from Rutgers University in 1948 and a doctorate in plant ecology from Duke University in 1952. He taught botany at Emory University from 1952 to 1956 and at Dartmouth College from 1956 to 1966.