Students in a modern poetry class at Boğaziçi University in Turkey recently learned firsthand — via a videoconference call — about the Yale School of Drama’s production of Shakespeares’s play “Cymbeline” as the newest installment in the Yale-Bogazici Arts Initiative.

In conjunction with the yearlong celebration of Shakespeare at Yale, Boğaziçi University hosted a viewing of “Cymbeline,” the senior thesis production by School of Drama directing student Louisa Proske. A professional recording of the play, originally performed in October 2011, was made available to the entire university community and Yale alumni in the area.

After the on-campus showing, a select group of English students from Boğaziçi University participated in a lively seminar discussion via video conference with Proske, the director of “Cymbeline,” and Kee-Yoon Nahm, the production’s dramaturg. Proske and Nahm — who just earned their M.F.A.’s at the School of Drama — spoke to the Turkish students via a monitor at the Yale Broadcast & Media Center. 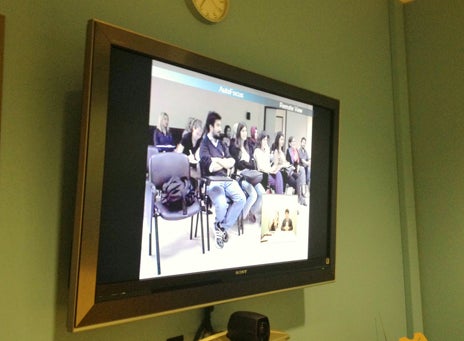 “The quality of the questions and the enthusiasm demonstrated by the students at Boğaziçi highlighted for me why these types of programs are so important,” said James Cohen, assistant secretary of for international affairs at Yale. “We very much look forward to the next chapter in this story.”

The initiative’s latest guise took advantage of the rich theatre traditions of both institutions. Boğaziçi University and the Yale School of Drama share famous alumni, including Haldun Dormen, considered by many to be the “first gentleman” of the Turkish theatre.

Launched in May 2010 when the Yale Symphony Orchestra and the Yale School of Drama visited Istanbul, the Yale-Boğaziçi Arts Initiative’s programs bring students from the two universities together around performing arts projects.